from Wikipedia, the free encyclopedia
Battle of Manzikert
Part of: Byzantine-Seljuk Wars 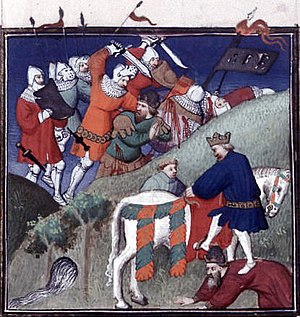 In the battle of Manzikert (today Malazgirt , north of Lake Van ), the Byzantine Emperor Romanos IV. Diogenes was defeated on August 26, 1071 by the Turkish Seljuks under Alp Arslan . This battle played a decisive role in the temporary collapse of the Byzantine resistance and initiated the Turkish settlement in Anatolia with the immigration of numerous Oghusen / Turkmen .

In 1046, the Byzantines first came into military contact with the Seljuks when they wanted to conquer the Armenian capital Ani . The under Constantine IX. The negotiated armistice lasted until 1064. In 1053 Constantine was forced, for financial reasons, to a. to release his Armenian troops, so that the eastern border of the empire was only under weak protection. Overall, the neglect of the army had considerable consequences for the empire. Constantine lost most of Byzantine Italy - with the exception of the area around Bari - to the Normans . From 1064, Sultan Alp Arslan led raids against the neighboring Christian states such as Armenia , Georgia and the Byzantine Empire. He conquered several fortresses, including the fortress of the Armenian capital Ani, the castle of Şavşat in today's Artvin , the castle of Kars and Oltu in Erzurum . In 1067 the conquest of the rest of Armenia and Caesarea followed . At the same time, the Pechenegs devastated the Balkans in autumn 1064.

In February 1071, Emperor Romanos IV (emperor since 1068) sent his ambassadors to Alp Arslan to renew a peace treaty of 1069 and thus protect the northern flank against further attacks by the Seljuks. Alp Arslan happily agreed to the treaty, broke off his siege of Edessa , and next prepared for war against the Fatimid heartland in Egypt. Shortly afterwards he conquered Aleppo .

Romanos wanted to take the opportunity to take active action against the Muslim threat to his empire in the east. In 1071 he set out with his army from Constantinople to the east in order to recapture the fortresses that had already been lost in Armenia before the Seljuks could react. When Alp Arslan, who was besieging Edessa (today's Şanlıurfa ), heard about it, he gathered his armies and advanced against Romanos.

After a peace agreement with Romanos IV, the Seljuks moved to Egypt. When Alp Arslan in Aleppo learned of the advance of Byzantine troops to recapture lost territories in Armenia, he moved north and met the Byzantines north of Lake Van.

The Byzantine army comprised around 40,000 to a maximum of 60,000 men, but perhaps not all of them took part in the battle. Around half of the soldiers deserted before the battle.

There were many foreign mercenaries among the troops . Among other things, Franks and Normans , Arabs , Pechenegs , Georgians , Abkhazians , Khazars , Alans , Cumans and Armenians fought for Byzantium. The expedition reached Theodosiopolis in June 1071 . There some of his generals suggested to continue the march into the Seljuq area and to take Alp Arslan prisoner. Others, including Nikephoros Bryennios , suggested that they wait and fortify the positions. Finally it was decided to continue the march. The Seljuq army will have been a little weaker. It came with allies and 30,000 cavalry from Aleppo and Mosul . The scouts of Alp Arslan knew exactly where Romano's troops were, while Romanos did not know the movements of his opponent. Romanos ordered his general Joseph Tarchaneiotes to move to Khliat with some of the regular troops and the Varangian Guard, along with the Pechenegs and the Franks . Romanos and the rest of the army marched on Manzikert. As a result, the army was divided into two halves of around 20,000 men each. It is not known what happened to the Tarchaneiotes troops. According to Islamic sources, Alp Arslan smashed this army. Nothing of this is mentioned in the Roman sources.

The Byzantines, in whose high command differences had arisen regarding the conduct of the campaign, had only inadequately clarified the area before the battle. The 400 Frankish (i.e. French and Norman) mercenaries under Roussel Phrangopolos also refused to take part in the battle, the Cuman and Hephenegic mercenaries had defected to the enemy the night before. The betrayal of Andronikos Dukas , who commanded the reserve troops, triggered panic in the ranks of the Byzantine army. Emperor Romanus himself was captured. After Valerian , he was the second emperor in Roman-Byzantine history to experience this. The Byzantine aristocracy fled to help the Dukas family achieve the imperial crown. Only now did the defeat develop into a real catastrophe, as the Seljuks saw the contract concluded with Romanos after the defeat as broken and began to conquer Asia Minor . The interior of Anatolia was lost to Byzantium and the Sultanate of Rum was created . Some local governors, such as Philaretos Brachamios in Sebastia or Abul Gharib in Cilicia and larger cities such as Edessa were able to stay in Byzantium for a while without the support of the central government, but mostly sooner or later also fell under Seljuk rule. The coasts remained Byzantine.

For the Byzantines the battle of Manzikert was a catastrophe, for the Turks it was the beginning of their state existence in Asia Minor. As such, victory is still celebrated today. The stamp on the nine hundredth anniversary of the victory in Manzikert shows Sultan Alp Arslan with his soldiers on the battlefield of Manzikert. 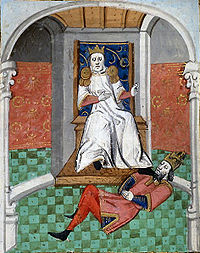 The Battle of Manzikert in 1071 represents an important landmark in Byzantine and Turkish history. From the areas of Asia Minor, which had established the strength of the Byzantine Empire for centuries, Byzantium (after the reconquest of the West and some port cities in the course of the 1st Crusade , which was to represent an indirect consequence of the battle), was able to survive in the later 12th century hardly more than the coastal regions hold, even if Manuel I. Komnenos went on the offensive one last time: About a century after Manzikert, the defeat of the Byzantines in the battle of Myriokephalon sealed the end of all attempts at reconquest. From the middle of the 13th century, the defensive struggle in the east was finally completely neglected because of the constant military pressure in the Balkans.

In modern research, however, it is very controversial whether the Turkish "land grab" was planned and whether Manzikert himself represented a real catastrophe at all. Romanos IV had already come to power through a coup and was therefore not undisputed. However, Alp Arslan had already signed a kind of contract with his predecessor, Constantine X. Initially, Alp Arslan's goal was not Anatolia, but the elimination of the Fatimids . Surprised by Romanos IV's offensive, Alp Arslan reacted more spontaneously than deliberately. The losses of the Byzantines at Manzikert are also estimated to be rather moderate overall; the majority of the Byzantine troops had apparently been able to leave intact. Many modern historians also believe that it was the cost of the campaign and the ransom payments that paralyzed the Byzantine economy and thus also weakened Byzantium's military resilience. Above all, however, they assume that the civil war within Byzantine that followed the battle made the agreement that Romanos had concluded with the victors after the battle ineffective, which is why the Seljuks continued their advance, with the internal Byzantine battles gradually occupying them Inner Anatolia, which had not previously been the destination of Alp Arslans.

The battle is mentioned in several sources, the best of which is the Byzantine Michael Attaleiates who personally took part in the battle. But there are also several contemporary sources that are anti-Byzantine. These include Michael the Syrian and Matthias von Edessa , who see the defeat of the Byzantines as a “divine punishment”. There is no contemporary Muslim source. One of the earliest Muslim sources comes from Ibn al-Qalanisi .