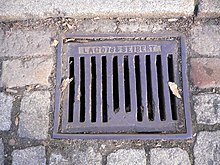 Street drain with frame and cover 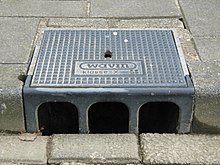 Street drain in the curb

A street gully , also called an inlet grate , gully , Swiss German / Swabian Dole , Swiss German also called sinkhole or Gullot , is a component for street drainage . It is used to absorb surface water on paved surfaces and divert it through an underground sewer .

The road gully has a number of names that can also vary from region to region. In addition to naming Gulli or Gully also the name is rainwater inlet , sinking or caisson needed. In Switzerland the terms Dole or Ole are used . The term floor drain or, due to its appearance, sewer grille is also used less often.

The term gully is used colloquially both as a collective term for street gullies and manholes, as well as for their covers, such as drain grids and manhole covers . The wider manholes are used for maintenance purposes and must be able to let a person down on a fixed ladder. They are therefore much wider than simple street gullies.

Section through a street gully

A street gully consists of an often grid-shaped upper part, the manhole cover or caisson cover (not to be confused with the manhole cover ) made of cast iron , which is also inserted in a cast iron frame. In road construction, the cover and frame are referred to as attachments. These components are available in different sizes and shapes (trough, desk, channel and special designs). Furthermore, these attachments are available in different load classes , depending on the use of the adjacent paved surface. Requirements for these attachments are regulated in EN 124 (formerly DIN 1229 in Germany ). The drainage shaft, which can be constructed from precast concrete parts, is located below the attachment . The concrete shaft consists of a support ring for the cast frame, a shaft and a base piece with a pipe connection to the sewer system or (less often) to rainwater infiltration . Optionally, a coarse dirt insert (sludge bin) made of galvanized sheet steel and a precast concrete part can be installed as an odor trap . Alternatively, the rainwater inlet can be built in such a way that the shaft extends 30 to 120 centimeters below the drain opening to the sewer system and ends with a collecting basin (sump). This basin serves as a dirt trap and takes on the task of the sludge catcher. There are now road gully bodies made of plastic. Gratings are installed with struts running across the road so that narrow tires on two-wheelers do not jam in the spaces between them.

As an alternative to punctiform drainage through individual road gullies, continuous drainage channels are also used as line drainage , especially in mountains and where heavy rain is likely to occur more often . 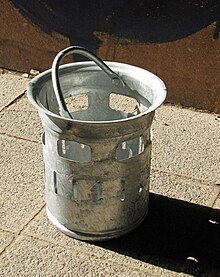 The sludge bin must be cleaned regularly to remove the rubbish that has collected in it . Detaching the cast iron caisson lids from the frame and lifting them off and digging out and emptying the loaded sludge bin is hard physical work. To make things easier, attachments are increasingly being used for Unimogs , Multicars or Bokimobile , which lift the caisson lid using a hydraulic cylinder and swivel it to the side. The sludge bucket is hooked in and hydraulically raised to empty it over the loading area of ​​the vehicle.

In the construction with collecting basins , the shafts are cleaned with a suction vehicle (called “Trummensauger” in Hamburg), which is equipped with a collecting tank, pumping system and a swivel arm for suction hose and pipe. After the grate has been lifted off, dirt, sand and standing water are sucked from the shaft into the collection tank.