The prefabricated elements usually consist of waterproof concrete with a concrete strength class of C25 / 30 and reinforcing steel. A jointless concrete core is created by grouting the gaps. The execution is carried out according to DIN EN 1992-1-1.

In the construction of commercially used structures, especially in industrial halls and office buildings, the use of prefabricated components is common.

In residential construction , precast concrete parts are used to build entire blocks of houses. The design was in the GDR and is widespread in many other countries. Entire settlements were built using the construction method that is known as prefabricated housing estates due to the use of concrete slabs (see also panel construction ).

In current residential construction in Germany, prefabricated elements are mainly used for system wall elements such as ceiling and roof panels and stairwells . Concrete stairs are rarely poured on site.

The range in the area of prefabricated cellars includes different ranges . Wall elements, ceiling elements, arches, balconies, stairs, supports, retaining walls or individual custom-made products can be produced with little effort. This creates a lot of space for creative designs .

The planning and production of the prefabricated parts for basements is computer-aided. The height and width of the elements of the basement to be created are recorded on so-called production tables. So-called spacers are laid out on the table so that the appropriately calculated reinforcement of the elements can also be concreted in precisely and precisely. Once this work has been carried out, the required concrete is poured into the element. The concrete requirement can be precisely determined. This means that the production of a prefabricated cellar can be optimally calculated and is therefore cost-effective. After this work step, the entire production table is shaken, i.e. it vibrates at the highest level. This procedure results in the greatest possible compaction of the concrete. A positive by-product of this type of processing is the later, simple further treatment of the elements produced in this way, which then no longer have to be additionally plastered, but only have to be filled.

The prefabricated ceiling elements are approx. 5 cm thick. They are formwork smooth on the underside. After laying the ceiling on the load-bearing and non-load-bearing outer and inner walls, the concrete is poured. For single-family houses, a ceiling thickness of 17 cm is usually sufficient. The simultaneous casting of concrete on the ceiling and triple wall creates a seamless connection between the body. Up to 14 kg of reinforcement are introduced per m² of ceiling (according to static specifications). A normal traffic load of 1.5 KN (kilonewtons) per m² is assumed here. The planning and execution is carried out in accordance with DIN EN 1992-1-1.

Window openings and door openings are cut out using a template . Recess bodies are built into the walls and ceilings of prefabricated cellars. The material used for this is polystyrene or sand-lime brick. The recess formers enable the simplified laying of supply lines or supply lines that lead from the basement to the ground floor, or from the basement to the outside. With the installation of this recess former, the alternative, namely core drilling, can be dispensed with.

After completing this work, the cast element is placed in a drying chamber. The cast element loses most of its moisture in this chamber. This process takes about 12 hours. The individual parts of the prefabricated cellar are then ready for removal and further processing on the construction site.

In the case of hybrid towers of wind power plants , which are particularly widespread in the inland due to the large hub heights required there, precast concrete parts are usually used in the lower area of ​​the tower.

Walls , especially high ones, e.g. B. to delimit prisons , are often built from concrete elements. Well-known examples are the former Berlin Wall made of elements and the Israeli barriers around the Palestinian autonomous areas .

Compared to the use of prefabricated components in the construction of ducts, z. There are hardly any alternatives, for example along railway lines and sewers .

Composable concrete pipes of different diameters are for the construction of water and sewer pipes of all kinds are used.

Manhole wells , cisterns , small sewage treatment plants and inspection shafts are built with stackable concrete manhole rings . Concrete manhole rings are mostly manufactured as standard components according to DIN 4034 and have nominal widths of 500, 1000, 1200, 1500 or 2000 mm.

Also, transmission tower from concrete, so-called concrete poles , usually consist of one or a plurality of prefabricated concrete elements. They are mainly used for lower construction heights (up to 20 meters) and for voltages below 50 kV (also as supports for overhead lines for electric railways). Smaller transmission towers made of concrete also usually consist of one or more concrete elements. 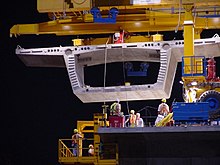 Precast segment of a bridge

In road concrete elements are now considered marginal and boundary stones, angular retaining walls, traffic islands and dividers, retaining wall , street lamps and manhole borders used. Entire sidewalks can be made from composite blocks or concrete paving . Barrier elements made of concrete, so-called New Jersey elements , are often used on construction sites . Airfields and runways can be built from prefabricated concrete slabs , but these are usually poured on site.

In tunnel construction, there is the so-called segment construction method, in which prefabricated segments are used to build the tunnel vault, with seven of these prefabricated parts normally forming a complete ring. Similar components are also used for the utility ducts located under the carriageway .

Classic precast concrete and reinforced concrete elements consist of solid (monolithic) concrete or reinforced concrete . This simplest type of precast concrete element exists in innumerable shapes and sizes. Examples of this are paving stones and corner stones , steps , special parts for the construction of platforms , supports and beams for industrial construction, but also stairs and wall elements for the construction of residential buildings. When used in building construction, the disadvantage is that such elements can only be connected to one another with great effort. The possibilities of connection are primarily limited to grouting pockets with connection reinforcement or special built-in parts that are filled with concrete on the construction site and thus permanently connect the part to the adjacent component, and weld-on plates made of steel, which are already in the right place in the precast part in the concrete plant are inserted and welded to the steel parts connecting on the construction site. Most of the Eastern European prefabricated buildings were built using this technique .

One way of creating precast elements that exactly match each other for bridge construction is the contact process (also known as match casting ). Because one part is used as formwork for the next part, the parts will later fit together very precisely. The prefabricated parts can then even be pre-tensioned with a “dry joint”, ie without glue or mortar.

In order to achieve better thermal insulation values, precast concrete wall elements can also be made of multiple layers, with the outside being made of reinforced concrete and the space in between being filled with insulating material (mostly EPS / foam polystyrene ). The outer shells are connected with metal anchors through the insulation material.

Hollow parts such as pipes and masts are manufactured as spun concrete in a rotating mold, in which centrifugal force presses the concrete against the outer wall, thus creating a hollow shape.

Because of their cost-effectiveness, semi-finished reinforced concrete parts are also used in order to be able to dispense with the time-consuming production of formwork on the construction site. Most reinforced concrete ceilings in Germany are now manufactured as semi- precast element ceilings instead of hollow planks . Similarly, walls can also be made from semi-finished parts. They are then referred to as cavity walls or triple walls , since element walls, unlike element ceilings ex works, consist of two shells connected by steel lattice girders, between which only concrete is poured on the construction site.