Finished parts are prefabricated components made from raw materials or semi-finished products that can be used in an end product without further processing. For example, roof tiles or windows are delivered to construction sites as prefabricated parts so that they can be used immediately.

Basically, two different types of prefabricated parts can be distinguished. Standardized mass products are manufactured in indefinite quantities and, thanks to their standardized properties, can be used in many end products. Examples are capacitors in the electrical industry or manhole covers . The aim is to reduce the costs of the individual element through the high number of components produced.

Finished parts can, however, also be produced as individual pieces. Smaller truss bridges in industrial halls are welded together from individual tubes and delivered as a whole to their destination. As a result, a higher quality can be achieved through prefabrication, since individual elements are joined together under controlled conditions in the factory and not in the open air. Furthermore, the construction time is shortened and thus the costs are reduced. For comparable reasons, segments of large prestressed concrete bridges and parts of entire steel bridges are prefabricated.

Frequently required prefabricated parts in the building industry include roof and hollow tiles , formwork stones , steel girders , overlays , insulating material and a wide variety of preliminary products for windows and doors. Important sectors with a high percentage of prefabricated parts are also interior fittings and furniture construction as well as the mechanical engineering and electrical industries .

In the case of more complex construction methods, the precast industry reached a climax with the development of prefabricated houses and steel construction , with the methods of composite and assembly construction and, on a smaller scale, in communications technology and electronics .

Prefabricated house during the construction process 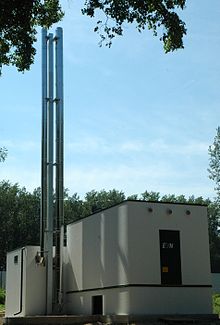 Biomass heating plant built from 3 prefabricated modules with widths of 3.7 m and lengths of 7.1 m

Segment of a prestressed concrete bridge

Prefabricated parts made of ceramic

Finished parts in the electrical industry