Components of a distance barrier with A-profile

A guardrail (colloquially and technical terminology in Switzerland, otherwise dated, even guardrail , in Austria also guardrail ) is a passive protection device ( restraint ) of mostly steel on streets . It essentially serves to prevent a vehicle from leaving the (multi-lane) lane and to protect areas outside the lane from a vehicle impact.

Exceeding the outer road boundaries, whether marked or unmarked, has been one of the most common dangerous situations since the advent of road traffic and later automobile traffic . However, given the large number of incidents, they only very rarely lead to accidents , which subjectively reduces the risk to the driver. While driving, a possible accident is assessed primarily by the probability of its occurrence, but less by the expected severity of its consequences. This was particularly evident in motorsport , which is carried out at high speed with constantly increasing time pressure and which exemplarily anticipated the general development in road traffic. With a few historical exceptions, crash barriers were initially introduced across the board in motorsport, which were positioned in places where serious accidents were to be expected, including outside curves on slopes, roads with tree cover and in places with a higher number of spectators. From the driver's point of view, there was initially a predictable, visually recognizable obstacle and, in the event of an accident, a physical barrier that protects the vehicle from more serious damage, such as when falling into ravines or when it comes into contact with vegetation.

In conventional road traffic, too, crash barriers initially prevailed at special danger spots. Today, the majority of many extra-urban roads are secured with crash barriers, including on motorways that separate the two directions of travel as a standard - sometimes in the form of concrete crash barriers that offer greater protection to oncoming traffic. With this protective device becoming more and more widespread, the most sensible form is being discussed today. Installations that are closed in the lower area are often viewed as safer, but are often more expensive to purchase and can therefore only be provided in smaller numbers.

From a purely statistical point of view, crash barriers lead to more frequent property damage with certain driving styles, although this is mainly limited to minor scratches and slight sheet metal damage. The number of serious accidents, however, is reduced by the physical lock on the one hand, but also by the learning behavior of the drivers ( learning from mistakes and learning from the example ), since the road delimitation is taken more seriously in anticipation of the expensive property damage. For cyclists and motorcyclists, guardrails represent a potential hazard, as they can tip over the plank or slide under it. Furthermore, there is a risk for this group of people to hit a post in the event of an accident.

Early crash barrier systems were rigid and could not absorb energy. Resilient systems that absorb energy through deformation were developed in the USA and introduced in Germany after 1950.

In 1955 the first crash barrier was built in Germany. The Ruhrschnellweg (today A 40) near Bochum was the pilot project. Since 1960 there has been a set of rules for the arrangement in the motorway median. In 1962 alone, 2000 kilometers of crash barriers were installed on the roadsides in Germany. By the end of 1964, according to the planning at the time, all federal motorways should be provided with guard rails on the median.

Most often, guardrails are made of steel. In Austria , aluminum was used for guardrails (both planks and posts) for a long time ; later steel was also used here. The reason why aluminum was used for guardrails in Austria is that the Austrian state operated Austria Metall in Ranshofen, which was able to produce the aluminum guardrails more cheaply. In comparison to aluminum, steel is much more suitable for crash barriers because it can withstand higher forces and is therefore more dimensionally stable. Guard rails are usually hot-dip galvanized to protect them from corrosion .

Ordinary steel crash barriers can consist of the following components, depending on the design:

post
Posts anchor the guardrail in the ground. Usually the posts are driven into the ground. In the case of a solid base (for example when mounting on bridge structures or the crowns of retaining walls), the posts can be screwed onto it using a base plate. Another possibility is to anchor the guard rail posts in sleeves (e.g. when securing median crossings in construction sites).
The cross-section of the posts can be designed as an I-profile or sigma-profile. The cross-section usually measures 55 × 100 millimeters (IPE-100 or SIGMA-100 posts).
The distance between the posts varies, among other things, depending on the location and the required containment level . Guard rails with a post spacing of 1.33 m, 2.00 m or 4.00 m are common.
Spar

B profile
The bars are attached perpendicular to the posts and run parallel to the direction of travel. A spar is usually four meters long and can be bent in the required radius to follow curves. The ends of two spars are screwed to a post as an overlapping joint.
There are two spar profiles for steel crash barriers:
The A-profile (Armco Flex-Beam guard rail, USA patent no. 1,989,763), which has an undulating cross-section , was the first profile of crash barriers. It was developed in 1933 by Sheffield Steel Corporation in Kansas, USA, which was taken over shortly afterwards by Armco (= American Rolling Mill Company). It is installed in most European countries (e.g. Austria , Switzerland , France or occasionally in Poland ), in Germany in the federal states of Rhineland-Palatinate, Schleswig-Holstein, Bremen, Lower Saxony, Hamburg, and occasionally in North Rhine-Westphalia , Berlin and Bavaria.
The angular B-profile was developed later than the A-profile. It is mainly installed in Poland, Denmark , Croatia , Israel and in various German (especially in the new) federal states. The name goes back to the name "Bethlehem Safety-Beam" from the manufacturer Bethlehem Steel Corporation , who first brought this profile onto the market.
Spacer and spacer
Spacers are used for single spacer barriers and spacers for double spacer barriers. They have different lengths depending on requirements and are attached to the post with the help of the post claw. The spars should then be attached as vertically as possible to the spacer or spacer. While bars can only be attached to one side of the spacer and guy belts are usually attached to the other side (simple distance guardrail), spacers carry bars on both sides (double distance guardrail).
Support bracket
The support brackets are installed in simple crash barriers. They are either mounted directly on the post together with the spar or on the post claw and are intended to stabilize the outer (above and below) areas of the spar.
Guy belt
Guy belts are steel straps and increase the stability and safety of the crash barrier by increasing its “tension band effect” in the event of damage. The guy belts are screwed to the end of the spacer facing away from the road in the case of simple distance barriers.

A basic distinction is made between simple (one-sided) and double (two-sided) crash barriers. These can be designed as a protective barrier. There are also special shapes and additional equipment.

simple guard rail
The simple crash barrier (ESP) only has a restraining effect on one side. It usually consists of a post, spar and support bracket. If it is built as a distance guard rail (EDSP), spacers and tensioning belts are also installed.
double guard rail
Double crash barriers (DSP) can hold vehicles back on both sides. They are mainly used on narrow median strips on roads with structurally separate directional lanes (mostly as distance protection plank, DDSP).
Super rail
Super-Rails have a further, slightly recessed rectangular spar above the actual spar (A or B profile), which is attached to the posts that are longer than the conventional guardrails. The way in which the lower spar is attached is also different. Super-Rails are often used in particularly dangerous places, for example on structures or obstacles close to the carriageway (e.g. bridge piers in the median, concrete foundations of sign gantries, etc.), but are more expensive due to the higher amount of material used.
additional equipment
Underrun protection for motorcyclists can be attached at critical points (often in the form of an additional spar attached low above the ground). Some manufacturers also offer anti-skid devices for pedestrians and railing structures for the rear of crash barriers, if these are installed close to a sidewalk / bike path running parallel to the street. 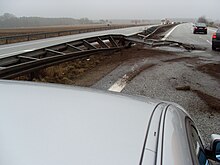 Middle guardrail broken by a truck on the A 24

The use of crash barriers in their current form is viewed critically by motorcyclists in particular . Even falling at low speed can result in slipping under the plank and serious injuries from getting caught on the posts. Typical are amputation injuries , in the worst cases up to decapitation . Such injuries are also possible when low sports cars slip through, the impact on the crash barrier, especially in convertibles, causing much greater personal injury than if there were no barrier at all. Improvements can be made quite easily by attaching underrun protection , which is not implemented across the board in Germany. This protection would either be achieved with a second, parallel lower plank (pendulum plank) or especially for motorcyclists with inexpensive, thick foam covers (crash absorber) for the posts. The MEHRSi association tries to achieve this through cooperation with sponsors and the responsible authorities.

Achieving greater safety for these road users is part of current accident research.