Effect of the preload

Base plate of a bridge with tendon ducts

Prestressed differs of other reinforced concrete by a systematic bias (= pre-strain) of the steel reinforcement, the prestressing tendons . The stretched tendons are supported by their anchors or directly by bonding with the concrete on the concrete, whereby the concrete receives a pressure load and a moment load due to any eccentricity of the anchoring relative to the cross-sectional gravity line . In addition, deflection forces are generated in curved or kinked tendon guides. The component is loaded by the prestress in such a way that when it is superimposed with external influences such as its own weight, there are no or only small concrete tensile stresses in the concrete cross-section. Since concrete can only absorb low tensile stresses (around 10% compared to compressive stress) before it cracks, but high compressive stresses, the prestressed (pressed) concrete can be better used. The component is stiffer in the area of ​​the working loads due to the lack of or greatly reduced crack formation and therefore shows smaller deformations (deflections) with large spans and high loads. An increase in the load capacity can be achieved by using prestressing steel, as this has a higher strength compared to normal reinforcing steel . Prestressed concrete is used today especially in bridge construction , but also in container construction or in building construction for girders , hollow boards or pre-stressed concrete ceilings .

The tensioning methods differ in the type of composite effect, which is how they get their names, as well as in the way the tension forces are entered in a component.

The tension wires or tension strands are positively connected to the concrete so that there is practically no relative displacement between the two materials. In the case of prestressing with immediate bond, there is a direct bond between prestressing steel and concrete. This method is mainly used in the prestressed bed of precast factories, in which tension wires or strands that are tensioned against external abutments are concreted into the precast element . After the concrete has been concreted and hardened, the prestressing is released. Due to the bond between concrete and prestressing steel and wedging of the relaxed wire (or strand) (Hoyer effect), the tension force is applied in the finished part. This type of preload is only possible with a straight prestressing steel guide. It is used, for example, for the manufacture of railway concrete sleepers and prestressed concrete hollow floors.

In post-tensioning with post-tensioning, the tensioning wires or strands are combined in a profiled sheet metal or plastic jacket tube, the tendon or cable, and are concreted into a structure with anchor bodies at both ends without pre-tensioning. After the concrete has set, the prestressing steels are tensioned on the movable anchors. Finally, the cladding tubes are grouted with a special cement suspension, the grout , which creates a non-positive bond between prestressing steel and concrete. The tension cable guide can also be curved in this method, which means that this method has great application possibilities.

The tension wires or strands can move relative to the concrete between the anchor points. With the external pre-tensioning, the tensioning cables are not located in the concrete cross-section, except in the anchoring or deflection area, but are free-spanning. With the internal prestressing, the tendons are concreted in, as with the subsequent bond, but not encased with cement but with grease, as with the monostrand . This eliminates the need to compress the ducts, which enables the tensioning cable to have a significantly smaller diameter and thus the use of prestressed concrete for thin components such as building ceilings. A curved tension cable guide is possible. Because there is no bond, there are hardly any changes in stress in the prestressing steel due to external loads with this type of prestressing, and there is also the possibility of re-stressing.

In the concrete cross-section (internal)

"An internal tendon without a bond consists of one or more concreted-in and subsequently prestressed wires, strands or rods in a corrosion protection coating in which the prestressing steel can move freely in the longitudinal direction and is only firmly connected to the structure at the anchor points. These tendons must be interchangeable. "

Outside the concrete cross-section (external)

“An external tendon is a post-tensioned tendon that lies outside the concrete cross-section, but within the envelope of the concrete structure. The tendon is only connected to the concrete superstructure by means of anchor elements and deflection elements. ”In Germany, road bridges with prestressed concrete box cross-sections have only been permitted in two variants since the late 1990s, mainly due to poor experience with inadequately grouted ducts: prestressing exclusively with external tendons and mixed construction (external and internal longitudinal prestressing).

Composite steel girders consist of steel girders and concrete belts that are connected to one another in a shear-proof manner using composite means. They can be prestressed by targeted elastic deformation of the steel girder in the transverse direction before the composite is established, so that the concrete is not subjected to tensile stress or is only stressed to a limited extent.

For example, double-T girders with bolts welded on at the top and bottom are first arched upwards, then loaded with individual forces and pushed through (prestressed) against the direction of pre-curvature. The lower flange is then concreted in the factory. After the concrete has solidified and after the load has been removed, the beam is slightly bent upwards again. On site, he receives the upper concrete base layer. Composite beams are stiffer and flatter than comparable steel beams.

A lack of experience with the new technology and an underestimation of environmental influences led to collapses, necessary demolitions or costly repairs to various prestressed concrete structures in the post-war period. Played z. For example, problems with stress corrosion cracking in prestressing steels (e.g. Neptune steel), ignorance of building material properties (different moduli of elasticity of concrete depending on the rock aggregates used) and imperfections in the calculation method (neglect of temperature gradients in the cross section) play an important role. Today these problems are considered largely resolved. By using the exchangeable external prestressing, a further improvement in robustness and thus an extension of the service life should be achieved in bridge construction. In addition, it is possible to detect cracks in the prestressing steels in the existing, possibly critical, constructions by using the tensioning wire break location method . 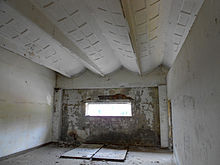 Half-shell elements with reinforcement of the tension zone: typical prestressed concrete elements in the GDR

Bendorf bridge over the Rhine

The first proposal to pre-stress concrete was made in 1886 by the American Jackson. In 1888 W. Döhring from Berlin applied for a patent which provided for wire inserts in plates, slats and beams to minimize cracks in the bed. Starting in 1907, at the suggestion of Mathias Koenen at the Technical University of Stuttgart, the first tests were carried out with reinforcement concreted in the tensioned state. However, the pretensioning force applied was almost completely ineffective due to the low steel tension of 60 N / mm² due to shrinkage and creep . In 1919 the Bohemian engineer Karl Wettstein used piano strings made of high-strength steel with high tension for thin concrete boards and was successful, but he did not see the reasons for it. It was not until 1923 that the American Dill realized that high-strength wires with high voltage were necessary. The Saale bridge in Alsleben was built in 1928 according to plans by Franz Dischinger . For the arched bridge made of reinforced concrete, tension straps made of structural steel St48 were inserted into the track girders and, when the bridge was fitted out, were pre-tensioned with presses and then concreted in.

The French engineer Eugène Freyssinet must be described as the father of today's prestressed concrete . He quickly recognized the great importance of pre-tensioning and devoted himself intensively to this technique. Freyssinet created the necessary prerequisites for the successful prestressing of concrete through his investigations into the creep and shrinkage of concrete as well as the use of high-strength, highly prestressed wires. From 1928 to 1936 he patented various inventions relating to prestressing jacks and anchoring of tendons with high-strength steel and steel tensions of 400 N / mm². Freyssinet erected the first prestressed concrete structures, which consisted of both prestressed elements in the prestressed bed and elements prestressed with cables.

The first prestressed concrete bridge in Germany was the Aue station bridge . It crosses a road with a maximum span of 69 meters over the station area and was designed by Franz Dischinger with an external tension and built in 1937. The first German pre-tensioned concrete bridge in composite, based on the Freyssinet method, was the Weg Hesseler overpass between Beckum and Oelde , which was built in 1938 and spanned federal motorway 2 with a span of 33 meters and has been a technical monument at the Vellern service area since 2012 (south side, driving direction Hanover). The Lahn Bridge in Balduinstein from 1951 was the first cantilevered prestressed concrete bridge. In 1965, the Bendorfer Rhine Bridge, a prestressed concrete girder bridge with a span of 208 m, which was then the largest in the world, was built.

The first road in Europe with pre-tensioned carriageway slabs was opened in November 1953 between Herbrechtingen and Mergelstetten. The first roundabout with a concrete carriageway in Germany was built on this section of the B19 in 2013.

At the nuclear power plant THTR-300 according to Rudolf Schulten , which went into operation in 1985, a reactor pressure vessel made of prestressed concrete with a steel lining ( liner ) was used, but this did not prove itself in operation.