The title of this article is ambiguous. Further meanings are listed under fitting (disambiguation) .

Spiral door fittings on the Romanesque portal of the Church of Navata , Catalonia

A fitting is a protective, connecting, functional or operating element, usually made of metal, which was originally attached to wooden components (or the hooves of horses) with nails : Furniture, chests, doors , windows and other structural elements were "shod" .

Typical fittings such as hinges or handles are used to introduce forces . Fittings often also or exclusively have a decorative function and are characteristic of certain epochs and architectural and furniture styles .

To improve the durability of medieval (church) doors, these were often covered with spirally twisted iron strips, which may also have had a disastrous ( apotropaic ) function. At the same time, of course, the look of the door was clearly emphasized. 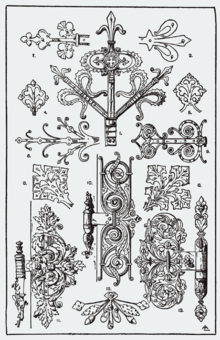 Decorated furniture fittings:
decorating elements and hinges ( panel from A Handbook of Ornament , 1898)

Constructions that are used to hold furniture that can be dismantled are known as connecting fittings.

A door hinge and piano hinge are used to movably attach a door to a cabinet .

The connecting element between the seat and the backrest of a car seat is also known as a fitting.

Window fittings connect the moving part of a window , the window sash, with the immovable part, the window frame. Depending on how the window is opened, a distinction can be made between different types of fittings that make the appropriate opening possible:

Swivel fittings
Straps and locks that allow the window to be swung open or closed to the side, comparable to a door
Tilt & Turn fittings
let the window swivel open completely or tilt to ventilate. In addition to the usual switching sequence when turning the operating lever ( turn-before-tilt , the tilt-before-turn switching sequence is also available). The latter is used to reduce the risk of children falling out through an accidentally opened window.
Sliding fittings
let the window move vertically or horizontally into an open position, which is often also desirable with combinations of floor-to-ceiling windows with patio doors.
Lock fittings
Today, edge locks are used almost exclusively to lock the window sash, which also control the tilt and turn function. Historic windows were locked , for example, with sash locks , sliding bolts , push rods with a basque drive , espagnolette or handle locks.
Shop fittings
Especially in southern Europe, but also in Scandinavia, shutters are still often used today, which are fastened to the window frame or wall with the help of shop fittings in order to shield the sunlight or to reduce the heat loss of the house.

On ships, especially of sailing ships, a large number of fittings, which are generally for accommodating find cordage and rope used. For example cleats , winches , trap stoppers or curry clips with which lines are operated and locked. In addition, jib sheet guide rails, travelers and other eyelets to which blocks (pulleys) are attached .

The cleats attached to the deck are used to moor the ship on land. The toe railing runs around the deck with the railing feet into which the railing supports are inserted.

The mast track in the middle of the deck is used to fasten the mast . The mast is supported by the shrouds and stage , for which purpose chocks are embedded in the deck , which absorb the tensile forces of the rig. The Lümmel fitting is used to connect the tree to the mast.

Parts that connect two moving parts, such as the various shackles or thimbles in the sail, are also named as fittings .

Fitting on the pimple hood in Baden

On military headgear of the 19th and early 20th centuries ( caterpillar helmets , shakos , spiked hoods ) fittings were attached more for decoration than protection.