The title of this article is ambiguous. Further meanings are listed under Horseshoe (disambiguation) .

Top and bottom view of a modern horseshoe, 3/4 rebate for countersinking the horseshoe nails 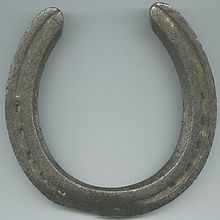 A horseshoe is a mostly U-shaped iron with nail holes, which is attached to hoofed animals by a farrier to protect their hooves by nailing , also known as shod . The hoof can also be protected by so-called hoof shoes .

Even in ancient times , people were looking for protection for their hooves, which are heavily worn down from hard, stony ground. Especially with the military use of the horse, hoof protection became a necessity, because during war the horses were stressed beyond their natural limits.

So-called hippo sandals are ancient forerunners of today's hoof boots for horses. In ancient Egypt , woven raffia sandals or leather shoes were used that were tied to the horse's leg with cords or straps. However, such constructions were not very durable. The Romans already used a hoof protector made of bronze or iron tied with leather straps, but here too the straps must have caused abrasion wounds. Contemporary sources report gold and silver hippo sandals for favorite horses of the imperial family and hoof boots for mules on mule tracks . The heavy, tethered irons were not suitable for fast riding, as they often fell off at higher gaits and, with their iron soles, offered little grip. Some had studs for better grip on muddy or soft ground.

Nailed horseshoes, as used to this day, appear to have been invented by the Celts. In use since the late Celtic period (2nd or 1st century BC), they were adopted and modified by the Romans. The finds of nailed horseshoes only became more numerous around 600. Despite individual ancient evidence, many historians therefore date the invention of the nailed horseshoe further into the early Middle Ages .

As a further indication of the dating of nailed horseshoes in antiquity, Neupotz's hoard is often given. The current interpretation of the find complex regards it as the booty of a returning Alemannic raid that was lost in 260 . Since pre-Roman and post-ancient finds also came to light during the salvage, the found horseshoes cannot be clearly identified as Roman.

Horseshoes for hind hooves, with one lift and with two lifts, rebates with rectangular nail holes

There are rebate shoes that have a longitudinal groove called a rebate with holes for the horseshoe nails. A continuous fold serves as a basic slide protection. Hoof nails with a rectangular head are used for folding irons, with the narrow edge fitting exactly into the fold.

Stamp shoes , on the other hand, have no fold. The name comes from the stamp with which the holes for the horseshoe nails are driven. For stamping iron, horseshoe nails with a square head are used. Since stamping irons have no profile, they slide better. Wide, smooth and therefore particularly slippery stamp shoes are suitable for the sliding stop when cleaning .

On the front legs, iron with a toe lift ( toe cap ) is usually used. An elevator is a flat piece of iron that is pulled up in the form of a leaf at the outer edge of the horseshoe ( pulling the cap ). The front toe tip of the hoof is rasped away a little so that the lift is flush. The lift gives the iron a better hold on the hoof. A central lift does not affect the hoof mechanism. In racing, toe-wound irons are used to speed up rolling. There are several patented variants of the toe cap.

Horseshoes with two side lifts ( side caps ) are mostly used on the hind legs . The two side lifts allow the iron to be moved back a little and the risk of the horse pulling off the front iron with the rear hoof is lower. A two-lift iron sits more firmly on the hoof and is particularly suitable when the hoof is brittle or parts of the hoof have broken off. However, the two side elevators interfere with the hoof mechanism.

The size can be specified in length × width in millimeters. The size selection ranges from 8 × 0 to 16 for cold blooded animals . It should be noted that the size specifications vary in length / width dimensions and the shape of the horseshoe, depending on the horseshoe manufacturer.

Titanium horseshoes from the 3D printer, lightweight custom-made for an Australian racehorse

The classic horseshoe material is “iron” ( steel ), but materials or material alloys made of aluminum and copper are also used. Today, different plastics are often used. These are then partially also glued on.

Studs give the horse more traction in poor ground conditions. They are used in jumping and cross-country equestrian sports to give the horse the necessary support during jumps, but also in the course. In winter they are used so that the horse can break up any layers of ice with them and not slip on them.

There are welded studs, plug-in studs, screw studs and forged-on studs, in English Calkins . Horses pulling heavily on hard ground wear their toes excessively, for them a rectangular piece of metal called a "handle" can be attached to the tip of the iron. In winter, the forged studs and the handle can also be sharpened for better traction ("ice handle").

To attach screw studs, holes must be drilled in the horseshoe at both ends and threads made in these. The studs are then screwed into these holes with the help of a stud wrench. Plug-in studs are simply driven into the stud holes. Studs are available in different sizes, widths and shapes, which can be selected according to the existing soil conditions. There are, for example, square tunnels, long tunnels, conical tunnels, H-tunnels, pointed tunnels, turf tunnels and mud tunnels. The disadvantage of cleats is the risk of injury, both self-injury ( crown kick , cleats bumps ) and for other horses in knocking out the cleated horse. Studs impair the gliding phase of the hoof when stepping on. The hoof is stopped immediately when stepping on, which leads to increased stress on tendons and joints.

Since the Widia pins do not protrude so far out of the horseshoe and have rounded edges, they provide extended support in poor ground conditions or on asphalt, but do not pose any risk of injury to other horses in the paddock and influence the position of the hoof to the ground even on hard ground not essential. Pins also significantly reduce the wear and tear of iron and nails on asphalt, pavement and gravel roads, but put more stress on the joints because the footed hoof can turn more poorly.

There are also special horseshoes for special requirements on the horse or hoof:

Cattle (driving cows) and oxen (draft ox) used as work animals are usually given claw irons, which were usually put on cold, i.e. had to be pre-worked precisely.

In popular belief, iron in general and the shape of the horseshoe in particular are said to have magical powers. It makes invulnerable, protects against evil spirits and can ward off natural disasters. This view may have been promoted by the earlier high price of iron. Horseshoes were and will be attached over doors, entrances, chimneys, on ship masts, etc. During the height of the witch craze in the European Middle Ages, it was believed that witches soared through the air on brooms because they were afraid of horses. Any memory of a horse would therefore be as effective at deterring witches as garlic would be a vampire . To prevent the resurrection, a horseshoe was placed on the lid of the coffin of executed witches. Even in popular Islamic beliefs, the horseshoe was ascribed a disastrous or auspicious power in some places. In the Maghreb , for example, a horseshoe hung over the front door should protect against the evil eye .

A found horseshoe was recently considered a good luck charm , especially if it still had at least three nails. However, the prerequisites were that you had found it and not looked for it and hung it with the opening facing up.

This throwing game is mostly played outside. It is important to throw the horseshoe in such a way that it wraps around a free-standing stick or is closer to it than the opponent's throw. Rule of the game: looping around the bar counts 3 points, the iron closest to the bar 2 points, and the next 1 point.