As precast refers construction method in which buildings are put together all kinds of prefabricated in workshops construction elements. Precast construction has the advantage that numerous work steps can be carried out in factory buildings regardless of the weather, but also the disadvantage that bulky elements are often transported. In buildings with heatable rooms, this type of construction can lead to sealing problems. 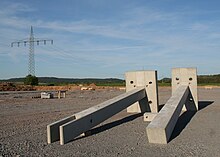 In Germany, prefabricated parts are mainly used for subsequent road bridges over the autobahn. In these, the bridge girders are pre-produced and the deck slab is only concreted on site.

Outside Germany, bridge construction with precast cross-sectional segments is very widespread. The bridge is made by joining and bracing individual pre-produced cross-sectional elements. For example, several hundred kilometers of prefabricated bridges were built for the Beijing – Shanghai high-speed line. The application of this process made the short construction time of only three years for the 1,000-kilometer stretch possible. The 32-meter-long, 12-meter-wide and 900-tonne girders were built on workplaces along the bridges. A special vehicle was used to transport the girders on the part of the bridge that had already been built to the installation site, where they were installed by a special crane.

Modern radio towers are almost always composed of prefabricated segments. Both guyed and free-standing structures (up to 150 meters high) can be erected quickly and economically. With guyed towers, prefabricated construction is common even for very tall structures. Smaller overhead line masts are often assembled from a few segments on the construction site. Smaller towers can also be delivered completely ready-made (for example as a concrete mast ).