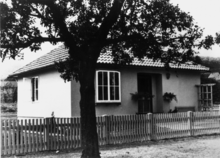 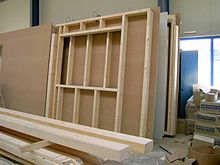 Wooden stud wall in a carpentry

According to ÖNORM B 2310 of the Austrian Standards International in Austria , which has been in force since 2009 , a prefabricated house is "a structure built on a prepared substructure made of prefabricated, floor-to-ceiling large panel wall elements, room cells and prefabricated ceiling and roof elements that are manufactured in production facilities regardless of the weather This standard applies to residential buildings (one and two-family houses, terraced houses, multi-storey residential buildings), office buildings, kindergartens, schools and multi-purpose houses and regardless of the building materials used (wood, concrete, brick). This standard does not include structures that are "constructed with non-storey, but prefabricated individual load-bearing structural elements, such as houses made of brick, aerated concrete, hollow blocks or casing stones or wooden block house planks", or that do not meet a certain minimum scope of services. 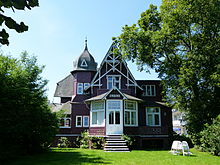 Villa Undine from 1885 in Binz on Rügen , a so-called Wolgasthaus and one of the first prefabricated houses in the world

Already in medieval half-timbered construction in Germany, the components were prefabricated, marked with so-called rhombuses and transported to the construction site on a suitable wagon. This was also due to the fact that the carpenters at the time had to do the work of felling and cutting in addition to the construction work. Such prefabricated structures sometimes even found their way across the sea, to Iceland and Greenland, wherever the people were willing to settle and the surrounding area did not provide the necessary materials. Even in ancient Greece there are indications that parts of structures such as temples were manufactured in foreign locations, put together and taken apart again for transport.

In 1516, Leonardo da Vinci described his plan to build an ideal city on the Loire, consisting exclusively of demountable type houses. Only the foundations should be created on site.

In 1624, panel elements were used in England to create prefabricated shelters for the state fishing fleet. They were transportable and could be erected within a short time without the help of specialist staff. The accommodations were functional, as the fleet could be used so mobile without building new houses in all locations.

This construction method was then used primarily by the military: In the late 18th century, hospital barracks were transported from Vienna to the distant theaters of war in Slovenia.

The so-called Wolgast houses in the style of spa architecture are considered the first individual prefabricated houses. These are artistically decorated wooden villas that were manufactured between 1868 and 1910 by the " Wolgaster Actien-Gesellschaft für Holzverarbeitung " in the town of Wolgast off the island of Usedom . By compiling the desired elements such as balconies, verandas or corner towers from an extensive catalog, the clients were able to put their houses together individually and have them largely prefabricated. The Pomeranian company built for clients all over the world, especially for property owners on Usedom and Rügen - and z. B. at Berlin Wannsee , in South America and German East Africa .

The Austrian Count Franz Hardegg acquired a prefabricated house from the World Exhibition in Vienna in 1873 and had it rebuilt as a hunting lodge on the Count's country estate in Veitsch , Austria. Today it serves as the Radwirt alpine inn at the foot of the Hohen Veitsch .

From the world exhibition in Chicago in 1893 , the Berlin-based Oskar Blumenthal brought back a wooden framed Wolgasthaus that was produced in Germany for the world exhibition and that could be dismantled. It was a two-story building with terraces, bay windows and an imposing tower. Allegedly without using a single iron nail, this building was rebuilt in 1895 as Villa Blumenthal in Bad Ischl .

After the first modern prefabricated houses came to Germany mainly from Sweden and Norway, ideas of their own soon emerged in this country too. This development started parallel to the emergence of wood-based panels in the 20s and 30s. In 1931 the Bauhaus architect Walter Gropius in Germany developed a building system made of prefabricated wall panels with an internal wooden structure. He wrote:

"Since 1910 I have been advocating the construction of assembly houses, for the industrialization of house building in lectures and articles, and have carried out research and practical experiments together with industrial companies ... In the factory, an assembly house can be loaded onto a truck with a trailer, with floor and walls , Roof and all the equipment ready to go to the construction site and assembled there in the shortest possible time, regardless of the season ... "

From 1943 to 1945 he improved his development in cooperation with Konrad Wachsmann in the USA to the "Packaged House System" after he had to leave Germany in 1934 as an opponent of the National Socialists. As early as 1940, prefabricated houses were distributed in the USA by mail order, and within a few years over 110,000 houses of the same type were sold.

The German prefabricated house market boomed from the beginning of the 1960s. From 1962 onwards, the Quelle GmbH mail order company offered the Huf Haus through the Quelle Fertighaus GmbH and the Kaufhof Group . Most of the 18,000 prefabricated houses that existed in 1962 were imported from Sweden . The Bausparkasse Mainz took over from the Alpine-Holzindustrie GmbH for its customers the entire annual production in 1962 in the amount of 800 prefabricated houses. In some cases, the type delivered by Quelle shaped entire building areas, for example in Bad Harzburg there is a spring settlement named after the company .

However, due to the materials used and the external appearance, prefabricated houses got a negative reputation as "uniform architecture made of cardboard". In addition, there was a scandal in the 1970s about wood preservatives containing PCP and lindane , which had been used in prefabricated houses. Market leaders in Germany in the 1970s were OKAL with over 4,000 houses per year and Neckermann-Streif with over 3,000 houses per year. In the 1980s, the market share of prefabricated houses was only a good seven percent. As part of the emergency aid for reconstruction in earthquake areas, small prefabricated wooden houses were particularly in demand because of their earthquake security.

After the reunification of Germany , prefabricated construction experienced an upturn, especially in the new federal states .

In 2013 around 15.6 percent of the newly built homes in Germany were prefabricated houses. In Baden-Württemberg they had a market share of 25.8 percent, in Lower Saxony only 6.7 percent.

In Austria, the proportion of prefabricated houses in private house construction was almost 30 percent in 2013, in Germany it was over 15 percent, in the USA over 90 percent of all homes are built using wood system construction.

Massive prefabricated houses have only a small share. Walls made of bricks, concrete, lightweight concrete ( expanded clay ) or concrete blocks are prefabricated here. 95 percent of all prefabricated houses are built using wood. Here, wooden frames are stabilized by cross struts, filled with insulating material and usually covered with plasterboard on the inside and wooden boards on the outside. Other sources differentiate the timber construction in z. B. timber frame construction, timber panel construction. A "stabilization" by cross struts is not necessary for timber frame and timber panel construction. B. wood-based panels (but plasterboard panels are also possible) takes over. For reasons of building physics, the wood-based panels are preferably arranged on the inside of the construction.

Log houses - mostly offered by Scandinavian or Canadian manufacturers - consist of planks or logs that are interlocked at the corners. Inside there is an insulating layer that is covered with plasterboard or wooden panels .

Advantages of a prefabricated house can be the short construction time as well as fixed prices and deadlines. In addition, model houses can be viewed in advance.

Prefabricated wooden houses have a good ecological balance and, thanks to their insulation, have a low heating energy requirement . However, if one compares different life cycle assessments with one another, general statements are not possible, since the boundary conditions always have a considerable influence on the result of the assessment. According to the Federal Association of German Prefabricated Buildings, almost all prefabricated houses are KfW efficiency houses today .

Prefabricated houses lose u. U. resale value after a few years. This result was achieved by at least one study that was commissioned by the “Massiv Mein Haus eV” association in 2000.