Stainless steel wire on a spool

Metals that are often used in wire production are iron , copper , brass , aluminum , silver , gold and stainless steel as well as a wide variety of copper alloys . Magnesium is now also processed in smaller quantities to make wires for the automotive and aviation industries.

Cored metal wire with a soul in flux called. Mostly it is brass wire for brazing , the C-profile leg of which surrounds the flux powder relatively tightly by means of pressing rolling, and more rarely welding wire. Wire-shaped solder , in which one, rarely several channels with flux filling run, is only very rarely called cored wire.

Polymer monofilament with a certain stiffness can also be referred to as wire. Nylon wire is used in decoration and for threading jewelry chains, PE wire as a piping , welding wire made of PVC to connect floor tiles made of PVC.

Wire drawing is a process that has been used since the Middle Ages, in which coarse wire is pulled through a small opening in a tool, making it thinner and longer. In manufacturing technology , wire drawing is the most important application of pulling through . The mastermind was an independent profession .

A distinction is made in production among other things cold drawing , rolling and electrolytic treatment. In wire drawing, a coarse wire that was formerly made by forging , today by rolling, is drawn cold through the tapering opening of a drawing die , die or rolling stand . It becomes longer and thinner without any loss of material. From production aisle to production aisle, it is pulled through ever smaller openings until the wire finally has the desired dimensions - mostly round. Originally, wire was pulled with muscle power, in a physically demanding job to which there was no alternative until the late Middle Ages.

In industrial production, the wire is pulled through the drawing die by a so-called drawing disk. Modern wire drawing machines (multiple pulls) have up to 31 stages and are very demanding in terms of control technology , since all drawing stages are run in one group.

Drawing is a plastic deformation and, if done cold, leads to work hardening . Therefore, heating ( stress relieving annealing ) often has to take place between the drawing stages . Wires made of copper have an important feature here . After reaching the final strength (approx. 450 N / mm²) this type of wire can be drawn further without intermediate annealing. In this way, copper wires are drawn from the cast wire (e.g. 12 mm ø) to the finished product without any heat treatment. Whether the wire is delivered hard or annealed depends on the application.

Drawing dies are often used to pull metal wires. These are usually round and have an opening in the middle. The wire first runs through the inlet cone, which compensates for the offset to the previous drawing die or to the manual feed. The wire is then tapered in the reducing cone and work-hardened in the subsequent calibration zone. Finally, the wire runs out of the outlet cone, which compensates for the offset to the winding reel or to the next drawing die. The drawing die heart, also called the drawing core, used to consist of hardened steel or HSS ( high-speed steel ), today it is made of hard metal , PCD ( polycrystalline diamond , artificial diamond ) or natural diamond. Since these materials are brittle and because tensile pressure loads occur during wire drawing, it is necessary that the drawing heart is enclosed in a frame made of steel or stainless steel (VA).

The wire is drawn using either the wet drawing process or the dry drawing process. During wet drawing, the wire is wetted with drawing agent or oil. This process reduces the friction in the drawing die, keeps the wire cool and thus reduces work hardening. This leads to better wire surfaces and enables a higher drawing speed. Since the machine has to be made liquid-tight, it is often more expensive. The wire often needs to be dried before it is further processed or sold. It is also possible that the wire reacts with the drawing agent or oil.

Drawing agent is a water-oil emulsion with about two percent oil content.

A special form of wire is square wire or profile wire. This wire has a square or rectangular cross-section and is usually made from round wire. The tools for the production of square profile wires are called Turkish heads and consist of four rollers arranged symmetrically to one another at right angles , which exert a uniform forming pressure on the wire as it passes through from four sides.

The term "Turkish head" refers to the arrangement of the rollers ( drag rollers ), which are arranged like a Turkish head knot, that is, like the knots of the headscarves ( turbans ) traditionally tied in the Turkish culture .

Customers of these square wires, which are mainly made from copper alloys include manufacturers of connectors of the press-fit , cut short from the square wire pins and install it in plugs and connectors.
Often this square wire is galvanically coated with tin or precious metals.

Wire drawing . The drawing disk on the right, the drawing die in the middle, and a decoiler on the left

As early as the 3rd century BC The Egyptians used various techniques to manufacture gold wires and process them into pieces of jewelry. Drawn gold wire is detectable in Central Europe as early as the Middle Bronze Age ( gold hoard from Gessel , 14th century BC). From the 5th century AD to the 14th century, the chain mail made of iron wire was the most important protective equipment of warriors. Thousands of wire rings were intertwined into chain mail.

The origins of German wire production lie in the Sauerland region . Especially around the city of Altena , where the German Wire Museum is located today , many masterminds were already settled in the Middle Ages. The water power of the numerous streams was used there to drive the drawing machines, which has been documented since the 14th century.

A decisive step in wire production was taken at the beginning of the 15th century, when the later Emperor Sigismund 1412-14 and 1418-1433 broke their superiority in the Central European and Levant trade in a trade war against the Venetian merchants and the Germans, especially in Nuremberg established companies. The Gruber-Podmer-Stromer company was particularly successful among the German-Italian trading companies because in 1415, after 15 years of development work, it manufactured fully mechanical, semi-automatic wire drawing machines that were operated with water power. For several generations, Nuremberg had almost a European monopoly on the manufacture and sale of wire and end products made from wire: needles, chains, nails, fishhooks, mousetraps, bird cages, fish traps, wire nets and wire screens of various sizes for ore, powder and paper mills .

In the 19th century, coarse coarse pulley pulls were introduced that allowed the wire to be drawn continuously. The quality of the wire improved significantly; the production volume increased enormously. The hydropower of the numerous streams in the Sauerland in the Brandenburg region and in Upper Franconia was an essential prerequisite for the region becoming the center of German wire production since the 16th century and it remained so even after its ore deposits were exhausted.

Modern architecture and construction works are inconceivable without wire. For example, the elastic and tensile reinforcement bars of the ubiquitous reinforced concrete are rolled wire, now also as stainless steel ribs ; There are wire ropes in the prestressed concrete . Wire ropes also revolutionized bridge construction , made funiculars and high ropeways as well as transparent roof structures possible, such as the roof of the Olympic Stadium in Munich . Wire mesh and wire mesh are increasingly being used as facade elements, cladding or fences. Welding electrodes are made of wire as well as u. a. Solder or hard solder required for pipe installation . 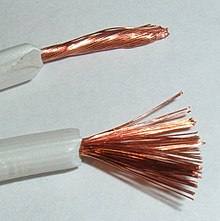 Copper wires in a stranded wire

Significant inventions and discoveries, especially in the 19th and 20th centuries, would not have been possible without wire. The principle of the electromagnet , the measurement of temperatures and forces occurring with wire, should be mentioned.

Metal wires with an insulating sheath (usually plastic) may also be cable or line called. Varnished copper wire ( enamelled copper wire ) is often used to wind transformers , coils and transmitters ; this wire is electrically insulated by a layer of lacquer.

Copper, nickel and iron wires of various profiles are also processed into connections for electronic components and into contact pins for connectors - these are short wire pins that are built into all types of connectors by the million. Square wires - that is, wires with a square cross-section - are often used for this purpose. Other related cross-sections are flat and round wires. In the electronics sector, wires are often galvanically coated, for example with tin, silver or precious metals.

In electrical engineering and in electronic components, wire made of various metals is processed, for example:

In Anglo-American countries, the copper wire diameters are still specified today according to the American Wire Gauge (AWG) system, which represents the number of drawing steps of the copper wire in a less end-user-oriented manner. 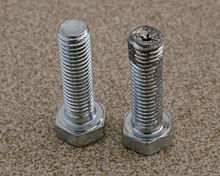 Wire and language (metaphors with wire)

Famous nail pictures come from Günther Uecker , which essentially consist of wire pins. Another work is the nail bird Phönix by Hubert Berke . In addition, some particularly original wire art works by Axel Fischer, Birgit Happ, Doro Jung, Rolf Nickel, Ren Rong and Udo Sander from the 1980s and 1990s have become known. It is noticeable that wire is used in various ways in art, for example to make sculptures appear almost weightless, as a means for three-dimensional drawings or as a material in combination with other materials.