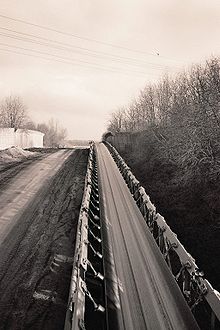 A conveyor belt in an open-cast brown coal mine

Conveyor belt from the lignite district of Upper Palatinate

Former conveyor belt between a clay pit and a brick factory

Conveyor belt at a supermarket checkout

The conveyor belt (also assembly line , conveyor belt or fachsprachlich belt conveyors , belt conveyors or belt conveyors ) is a mostly stationary conveyor leading to the technical department of the continuous conveyor belongs. Conveying and transport tasks in mining , in industry and on long distances, above or below ground, have been handled by conveyor belts for decades . Conveyor belts have a very high level of operational reliability and have proven themselves in many areas of application. Belt conveyors are reliable transport systems that are economical , very productive and environmentally friendly due to their low energy requirements.

It is driven by frictional engagement of one or more drive drums. The conveyor belt is used for both bulk goods (e.g. ore) and piece goods (packages). Along with roller conveyors and roller conveyors, it is the most common mechanical continuous conveyor.

The conveyor belt essentially consists of:

Belt misalignment is one of the most common reasons for failure of a belt conveyor. The belt moves sideways due to various causes. If the maximum permitted misalignment is exceeded, the belt, system or system may be damaged or malfunction. The most common problem is that the belt comes into contact with structural components that are dragged through by the conveyor belt. The use of lateral guide rollers is to be avoided.

Belt conveyors that can convey in two directions are called reversing belts . You will e.g. B. used to feed silo groups.

The longest conveyor belt in the world today is located in Western Sahara : This transports phosphates over a distance of around 100 km from Bou Craa to the Atlantic coast .

The greatest danger with belt conveyors is that body parts can be drawn in between the belt and the rollers and torn off. As the belts usually run relatively quickly, people do not have enough reaction time to activate the emergency stop cord in time. Belt conveyors usually have drive energies that do not allow the belt to be stopped by hand (typical for a belt drive in a quarry is a drive power of over 100 kW). Strict safety rules therefore apply to belt conveyors (list is not exhaustive):

The basic safety and EMC requirements for the construction and equipment of stationary belt conveyors for bulk goods can be found in EN 620: 2002. This European standard is a type C standard according to EN 1070: 1998.

Properties of belt conveyors compared to other continuous conveyors 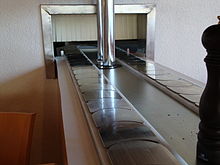 The rubber band is passed over plate magnets and metallic objects are deflected.