Atlantic is a redirect to this article. Further meanings are listed under Atlantic (disambiguation) . 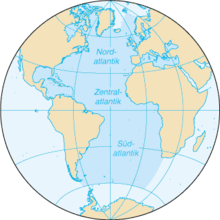 Map of the Atlantic Ocean 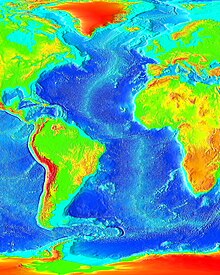 The Atlantic Ocean , also known as the Atlantic , is the second largest ocean on earth after the Pacific . The boundaries are the polar circles and the meridians through Cape Agulhas in the east and Cape Horn in the west. The area covered by it is 79,776,350 km², with the secondary seas 89,757,830 km² and the Arctic Ocean 106.2 million km², a total of about one fifth of the earth's surface . The average water depth (including all secondary seas) is 3,293 meters.

The name goes back to the term Atlantis thalassa in the ancient Greek language : Ἀτλαντὶς θάλασσα 'Sea of Atlas ' .

In Greek mythology , it was believed that the world ended behind the Pillars of Heracles , west of the Strait of Gibraltar . There the Titan Atlas (Greek Ἄτλας , carrier ' ) supported the celestial vault at the westernmost point. The ocean was named in his honor.

Laurasia and Gondwana in the Triassic

The Atlantic emerged in the Mesozoic era through the division of the geological continents Laurasia in the north and Gondwana in the south. Today it separates Europe and Africa from the American continent . The mid-Atlantic ridge towers above the deep sea floor by up to 3000 meters and separates the west and east Atlantic depressions of the ocean.

The Atlantic holds a water volume of around 354.7 million km³. Its greatest width is 9000 km between Senegal and the Gulf of Mexico , the smallest 1500 km between Norway and Greenland . The maximum depth is reached at around 8,400 meters in the Milwaukee Depth, part of the Puerto Rico Trench . The Gulf Stream , which comes from the Caribbean and crosses the Atlantic to Greenland, is responsible for the relatively mild climate on the northern European coasts. Because of the intensive shipping traffic on the neighboring seas (including the Mediterranean , North and Baltic Seas ) and the transit traffic between Europe and North America, the Atlantic is the world's busiest.

The Atlantic has major Mediterranean , marginal and inland seas :

Natural connections to the other oceans

The Denmark Strait between Greenland and Iceland and the Davis Strait with Baffin Bay between Canada and Greenland connect the Atlantic with the Arctic Ocean . To the east of Iceland, the European Arctic Ocean merges into the Arctic Ocean, which on the opposite side is connected to the Bering Sea and thus to the North Pacific . Since the central Arctic Ocean is inaccessible to common seafaring, the routes that run along the northern coasts of Eurasia and North America are of particular importance .

The largest continuous connection between the Atlantic and the rest of the oceans extends south of Cape Agulhas ( South Africa ). The meridian running through this place separates the Atlantic from the Indian Ocean . In the south, the 60th parallel forms the border with the Southern Ocean that was arbitrarily drawn by the Antarctic Treaty . Natural connections to the Pacific Ocean are the Strait of Magellan , the Beagle Channel and the Drake Strait around Cape Horn .

Canals from the American (Panama Canal, since 1914) and from the European Mediterranean (Suez Canal, since 1869) were built to create a simple connection to the Pacific and Indian Oceans . Both channels separate continental land masses from one another.

To the Atlantic Ocean around and on its marginal seas are many countries that in the east to Ostfeste and west to West Festivals are counted. Through the Mediterranean, he also has access to the Asian continent, which means that the Atlantic has riparian states on five of the seven continents; as much as no other.

Apart from the extreme north of the continent, Europe lies exclusively on the Atlantic and its tributaries. Asia is only connected to the Atlantic via the Mediterranean and the Black Sea . In Africa, the area bordering the Atlantic is limited to the direct coastal states.

On the west fortress ( America ) the Atlantic with its American Mediterranean extends far into the continent. Many of the countries from Canada in the north to Panama in Central America to Chile in South America have, in addition to their access to the Atlantic in the east, at the same time access to the Pacific Ocean in the west.

In the 15th century the European expansion began with the expeditions of the Portuguese to Africa and the Spaniards to America. It was only after the Suez Canal opened in November 1869 that it became possible to travel through the Mediterranean to Persia, India or Asia. Until then, the ships had to circumnavigate the Cape of Good Hope . The Atlantic is still the busiest ocean.

World trade has increased sharply since 1945 ; In the course of globalization , the division of labor between economies has changed significantly. Large parts of world trade are carried out by ship ( merchant shipping ). The average size of merchant ships has increased sharply; Since the 1960s, the container has made general cargo ships largely unnecessary and made the transport of general cargo much more efficient and cheaper (see also containerization , container ship ). Large ships usually have a great draft and need deep water harbors .

Parts of the Atlantic are considered overexploited .

In the 19th century, the British Empire was the undisputed naval power . From 1914 to 1918, throughout the First World War , the Royal Navy practiced a naval blockade of the German Empire ; the Reich government responded with submarine attacks.

See also : Sea War in World War I  and Battle of the Atlantic

The German Atlantic Expedition explored the southern part of the Atlantic (and the atmosphere above) from mid-1925 to mid-1927 with the research vessel Meteor . It drove thirteen times at different latitudes from east to west and back, using an echo sounder to create depth profiles of the sea floor.

Airplanes collected large amounts of weather data. Since the advent of satellites , they have been the main source of data for exploring the Atlantic.

On the floor of the Atlantic there except ocean basins , deep-sea trenches and marine lows and some lower thresholds than most striking structure the Mid-Atlantic Ridge . This is a jagged elevation on a diverging plate boundary that runs through the Atlantic roughly in the middle from north to south. Here lava rises constantly, pushing the two adjacent oceanic plates apart, thereby widening the Atlantic and driving the continents behind it ever further apart; the sequence is proven by dating the rocks on the ocean floor, which are the farther away from the ridge, the older.

One of the deep sea ​​lows is the Puerto Rico Trench with the Milwaukee Depression, which is 9219 m below sea level and the deepest point in the entire Atlantic.

With their water, they also transport numerous pollutants and nutrients into the Atlantic.

The Atlantic Ocean has an average salinity of around 3.54%, while the value in the Pacific is 3.45% and the Indian Ocean is 3.48%. In the Randmeer North Sea , the salt content is noticeably lower at 3.2–3.5%. In the vicinity of river mouths it falls to 1.5–2.5% and only reaches 0.2–2.0% in the Baltic Sea , which is almost completely surrounded by the mainland and has little water exchange with the Atlantic.

Some of the largest islands on earth are in the Atlantic Ocean: the British Isles , Greenland , Ireland , Iceland and Newfoundland . Archipelagos are the Azores , the Bahamas , the Bermuda , the Falkland Islands , the Brazilian Fernando de Noronha archipelago , the Greater Antilles , the Cameroonian archipelago around São Tomé and Príncipe , the Canary Islands , the Lesser Antilles , the uninhabited Sankt-Peter-und - Saint Pauls Rocks , the Isles of Scilly and the island state of Cape Verde . Isolated islands are Annobón , Ascension , Bioko , Bouvet Island , Gough Island , Madeira , St. Helena , Trindade and Tristan da Cunha .

Famous regattas are sailed on the Atlantic :