The sea ​​blockade , more rarely also sea ​​barrier , is an important strategy in a sea ​​war and also in some economic wars . It consists in restricting or preventing the freedom of movement of the opposing naval forces or its merchant shipping by militarily blocking its coast or important access routes. The possibility granted by maritime law to search foreign ships for enemy property can also be the motive for a naval blockade.

In the event of war, the aim of a naval blockade is to interrupt the enemy's maritime traffic routes with warships and / or mine barriers so that his ability to wage war is severely restricted or his supply routes are threatened. Sea blockades or their breaking decided numerous wars in antiquity . a. in the Aegean and the Persian Wars , on the part of the Phoenicians , in the battle between Carthage and Rome . The Hanseatic League erected the first sea blockade in Northern Europe in 1284 against Norway.

The legal basis and requirements for carrying out a blockade can be found in the San Remo Manual on International Law Applicable to Armed Conflicts at Sea .

Interactions in politics before the First World War

During the Schleswig-Holstein War (1848–1851) , the Danish Navy brought German maritime trade in the North and Baltic Seas to a standstill within a few days in April 1848 . Then the Reichsflotte was founded, but this blockade could not be broken.

Before the Franco-Prussian War (1870/71) France was considering a landing in northern Germany. Later these plans gave up; During the war, the French fleet blocked the German North Sea coast instead.

The increasing opposition between Great Britain and Germany around 1900 acquired a momentum of its own related to the possible sea ​​war :

Even before the war the Admiralty of Great Britain had developed the plan to bring Germany to its knees in a global economic war in the event of war; The plan was to block the sea and communication routes, censor the submarine cables and cut off the German Empire from the international financial markets. British plans were abandoned after the US government learned of it and opposed it, despite the fact that the British Cabinet had approved the Admiralty's plan in 1912. 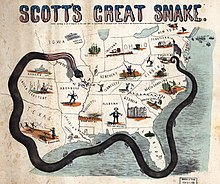 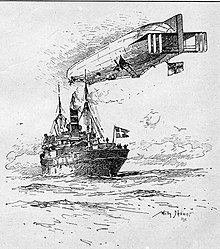 "Blockade Breakers: How Our East Africans Got Ammunition"

During the First World War , the British naval blockade of the German Reich in the North Sea was one of the decisive factors in the fact that the Central Powers fell behind from around 1916. Because of the overwhelming power of the British fleet, the German Reich could not launch an offensive at sea in 1914, so that the opposing shipping in the English Channel was not exposed to any major disruptions. In particular, the control of the North and West European seas ensured that the British expeditionary force could cross to France undisturbed. The German attempt to u. a. to counter-block the British Isles by deploying naval airships in the North Sea proved ineffective.

Destruction of the German Raider 'leopard' by His Majesty's Ships 'achilles' and 'dundee' Art.IWMART15814

While Germany had to assert itself in a two-front war, the British were able to maintain their naval rule over the North Sea . Its aim was to cut off the enemy from access to all sea routes, which later severely impaired the general supply of Germany. The blockade was carried out by the so-called Northern Patrol in the Scotland - Iceland - Lofoten triangle and the Dover Patrol in the English Channel . The Northern Patrol was finally lifted in October 1917 due to the USA entering the war in April of that year. The forces released by this, especially the auxiliary cruisers , were now used to secure convoy in the Atlantic. The effective sea blockade, which made the supply of food , Chile nitrate and colonial goods in general very difficult, was continued after the armistice of November 1918 until July 12, 1919, in order to force approval of the signing of the Paris suburb agreements in the summer of 1919. It was only lifted afterwards. British General Herbert Plumer, 1st Viscount Plumer , complained that his occupation forces could no longer bear the sight of "hordes of thin, bloated children begging for the rubbish from British accommodations".

Towards the end of the war, a naval order was issued on October 24, 1918 for a relief attack on the British Navy in order to break through its ongoing blockade on October 28. However, the new Reich government was strictly against this attack and prevailed after it received support from the sailors' uprising that broke out in Kiel . The mutiny of the sailors against what was already felt to be unnecessary human sacrifice also contributed to the German November Revolution.

The British naval blockade represents a clear breach of international law, both by then and by today's standards, as it resulted in a systematic shortage of food and nutrition for the civilian population. The Reich Health Office came to this assessment in a memorandum of December 16, 1918. It attributed the deaths of 763,000 civilians and total damage to German national strength of more than 56.3 billion marks. These figures do not include the famine deaths in 1919 as a result of the ongoing sea blockade since the armistice. However, there are no reliable figures on the victims. In 1919, the German doctor Max Rubner estimated the number of dead from the blockade after the armistice at 100,000, the British trade union leader and peace activist Robert Smillie also estimates 100,000 dead. The higher German number obviously includes the domestic political mistakes in food management (initially only a short war was expected).

The First World War in East Africa was marked by the geographical isolation of the German protection force in German East Africa . In this region, the German Reich only had the small cruiser Königsberg , which, however, was blocked by superior British forces in the delta of the Rufiji River from the end of September 1914 . From March 1, 1915, Great Britain imposed a sea blockade off the entire coast of German East Africa. Shipping traffic by the Central Powers and neutral states was banned, and compliance was monitored by cruisers and auxiliary ships. Nevertheless, two German blockade breakers made a breakthrough in the course of the war: the Rubens reached Mansa Bay near Tanga in April 1915, badly damaged , and the Marie reached Sudi in March 1916 and was able to break through the blockade a second time on departure.

Although the Russian Baltic Fleet was numerically far superior to the German, the German Commander-in-Chief Prince Heinrich of Prussia succeeded in putting it on the defensive. As a result, there was not a single Russian attack on German coasts during the entire war, but the German navy was able to support the army's operations in the Baltic States .

Although the Austrian Navy was the sixth largest navy in the world at the time, it was unable to fully exploit its strengths, on the one hand because it was primarily intended to serve as coastal protection and deterrence, on the other hand due to the geographical conditions - in particular the Adriatic strait near Otranto . The Strait of Otranto made a decisive contribution to the establishment of a sea blockade. After Italy changed sides to the Triple Entente, this blockade was able to build on the dominance in the Mediterranean, supported by France and Great Britain . From this secure base, the three countries succeeded in erecting a sea barrier consisting of ships and heavy coastal artillery at Otranto. The Austro-Hungarian Navy tried twice to break through the sea barrier. The first attempt at a breakthrough in the summer of 1917 resulted in the largest naval battle between Austria and Hungary in World War I, in which the Allies suffered a severe defeat, but the Austro-Hungarian Navy suffered only minor damage. Nevertheless, the breakthrough did not succeed because the topographically favored lake barrier was still too strong. The second and last attempt was made in June 1918, but was canceled because the surprise effect failed: the Allies discovered one of the two naval squadrons prematurely and were able to sink the Szent István , leaving the Danube monarchy with only three modern large battleships .

The siege of Malta in World War II was a sea blockade of the island that lasted from 1940 to 1942 with permanent air raids by the Italian and later the German air force ( Axis powers ).

Sea blockades in other wars

In view of the experiences from the World War, Hitler called for “living space in the east”.

“Gdansk is not the object in question. For us it is about rounding off the living space in the east and securing food ... In Europe there is no other possibility. "

The aforementioned nutrition of the large number of German populations dependent on imports was not guaranteed during and after the World War because of the British naval blockade and contributed to the military and political defeat. The Soviet Foreign Minister Molotov first negotiated the German-Soviet economic agreement with Ribbentrop in Moscow , which made warfare possible even under blockade conditions through Soviet raw material deliveries, and on August 23, 1939, the German-Soviet non-aggression pact . Thus the way to war was free.