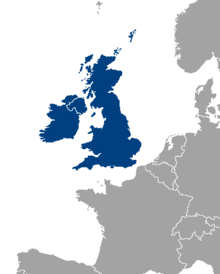 The archipelago called the British Isles

British Isles is a common term for an in northwest Europe lying archipelago . The islands include Great Britain , Ireland , the Hebrides , Shetland , Orkney , the Isle of Man , Isles of Scilly , Anglesey, and the Isle of Wight .

The history of the term British Isles seems to go back to an ancient name for the Pretan Islands , although the term was not particularly fluent. The reintroduction of the term was not least related to the territorial expansionism of the English and British crowns.

Including Ireland and excluding the Channel Islands, the archipelago comprises around 6000 islands with a total area of ​​315,134 km².

The British Isles are surrounded by the North Sea , the English Channel and the Atlantic . The Irish Sea , along with the St. George's Channel and the North Channel, lies between the islands of Ireland and Great Britain.

The inclusion of the island of Ireland in the British Isles is controversial, as it calls into question the sovereignty of the Republic of Ireland in the view of many Irish and in part also the Irish government and is a misleading label with regard to Ireland's historical and cultural identity.

The growing familiarity of the latter term raises the question of whether an archipelago name as such is useful at all. For example, in the case of Corsica and Sardinia, no archipelago name is used.

Dominions in the territory of the British Isles