The law of the sea is an area of law that encompasses all legal norms relating to shipping .

The first evidence of the Rhodian law of the sea can be found in the digests of the Roman Corpus Iuris Civilis (528 - 534) by Justinian I. The Romans probably adopted it in the 1st century BC. Under Tiberius the Rhodian law of the sea as international law ( Latin ius gentium ) in their Roman law. According to this, the skippers ( carriers ) were obliged not to take heavy and valuable goods into an old ship and to deliver the goods handed over to them later. Written contracts for sea transport were valid. The " large average " ( Latin Lex Rhodia de iactu ), which is still partially valid today, was written by the lawyer Lucius Volusius Maecianus . If the ship got into distress and goods had to be thrown overboard as a sea ​​litter , the charterer was allowed to sue from the sea ​​freight contract . The freight contract was considered a consensual contract within the framework of service and work contract law ( Latin locatio conductio ), which was also applicable to the sea freight contract. In the event of a dispute, the shipper disadvantaged by the sea litter ( Latin locator ) sued the carrier ( Latin conductor ) for claiming the damage owed ( Latin contributio ) from the beneficiary shipper . The Romans knew the sea loan ( Latin foenus nauticum ), the forerunner of Bodmerei ; Today's ship financing is provided by ship mortgages . 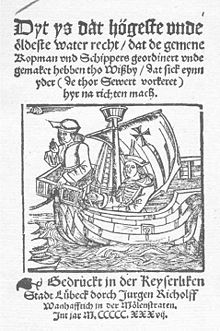 In the Middle Ages , around 1000 , Godfrey von Bouillon participated in the constitution of the Assises of Jerusalem , some of which also contained the law of the sea. Jacob I issued a seaman's code of conduct in 1258. In the meantime, between 1160 and 1286, the Rôles d'Oléron were created , which are today considered to be the oldest written set of laws of the sea. They described the common law at sea, the commercial practices of maritime trade and included a catalog of Bußbestimmungen for offenders. The law of the sea of ​​Wisby ( Swedish Waterrecht tho Wisby ) appeared probably after 1350 and contained both parts of the Lübeck statutes and the Rôles d'Oléron; the earliest surviving prints are in Central Dutch (1532, Amsterdam) and Central Low German (1537, Lübeck). The French sea guide ( French Guidon de la mer ) can be dated to the time between 1556 and 1584 and included the sea contracts (for example the large aventurei ) and the sea insurance. Parts of this were taken over by the ordinance of Louis XIV in 1681 . The old Hanseatic Maritime Law was created in 1591 and was published on May 23, 1614 as "Hanseatic Cities Ship Regulations and Maritime Law". Denmark introduced its first uniform law of the sea in 1561, England followed in 1651, Sweden in 1667; France standardized its maritime law with the maritime law ( French Ordonnance de la Marine ) in 1681 , the Netherlands followed in 1711.

In Prussia , the codification began with the Prussian maritime law of December 1727, the content of which was incorporated into the General Prussian Land Law (APL) of June 1794. It was the first all-German law to deal with a uniform law of the sea (II, 8, § 1389 ff. APL). According to II 8, § 1658 APL, the shipper had to issue a "receipt, or so-called connoissement ( bill of lading ; d. Author)". The ADHGB of May 1861 first recorded a common German maritime trade law and regulated the sea freight contract, among other things, in Art. 557 ff. ADHGB, the provisions of which were taken over verbatim from the HGB in January 1900. The sea freight contract referred to the whole ship, part of it or to individual goods ("general cargo"; Art. 557 ADHGB), for which a charter lot ("charter lot") was to be issued (Art. 558 ADHGB). According to Art. 480 ADHGB and Art. 481 ADHGB, the carrier ("skipper") had to ensure that the ship was seaworthy and / or loaded . In accordance with Art. 624 ADHGB, the carrier was entitled to a statutory lien on the freight due to unpaid freight . The bill of lading is regulated by Art. 645 ff. ADHGB.

In 1864 the York Antwerp Rules (YAP) were written in York , which were drawn up in Antwerp by 1877 and published in 1890 with the recommendation that they should be used as a basis for all sea freight contracts. They concern the insurance of large average accidents and distribute the damage to the ship and cargo.

In March 1948, the World Shipping Conference in Geneva decided to found the International Maritime Organization . The UN Tribunal for the Law of the Sea was set up in Hamburg in October 1996 and operates as an independent organization in the UN system on the basis of the United Nations Convention on the Law of the Sea of December 10, 1982.

There is also maritime insurance law as a special area . Marine insurance is part of transport insurance , but according to Section 209 VVG, the regulations of the VVG on insurance against the dangers of shipping (marine insurance) are not applicable (see General German Maritime Insurance Conditions ).