Convention on the Law of the Sea

The United Nations Convention ( UNCLOS ; English United Nations Convention on the Law of the Sea , UNCLOS ) is an international agreement of maritime law , which is to regulate all types of use of the seas. It was closed on December 10, 1982 in Montego Bay ( Jamaica ) and entered into force on November 16, 1994, one year after the deposit of the 60th instrument of ratification . The agreement is also known as "UNCLOS III". The UN Conference on the Law of the Sea lasted from 1973 to 1982 and was the third of its kind. The previous conferences are referred to as "UNCLOS I" and "UNCLOS II".

The Convention combines the previously applicable, in Geneva seas conventions codified law of the sea together, the previously controversial width of the places territorial sea and its contiguous zone established and developed the regulations for the continental shelf continues. It re-introduces the exclusive economic zone with special rights of the coastal states, an international regime of the seabed and its subsoil beyond the borders of the continental shelf and the archipelago waters. It also regulates the protection and preservation of the marine environment, scientific marine research, and the development and transfer of marine technology. In addition to the older principle of freedom of the seas, the Convention is based on the newly introduced principle of the common heritage of humanity.

Several international institutions were created with the Convention:

To date, two additional conventions have been agreed to the Convention on the Law of the Sea:

A contractual regulation of the international law of the sea became necessary after some states no longer recognized the old customary law from the 17th century , which limited national coastal waters to a width of three nautical miles (about 6 km). The seaward areas beyond these coastal waters were then regarded as " international waters ".

Some states claimed an extended zone to protect fish stocks or exploit raw materials in the area. At a first conference in The Hague, the Netherlands, from March 13 to April 12, 1930 , 47 countries met but could not agree on any proposal. The United States under President Truman extended its zone to the continental shelf in 1945 . Other countries followed suit and expanded their coastal waters , for example in the case of Chile, Ecuador and Peru to 200 nautical miles. By 1960, 26 of 103 states retained the old three-mile zone, 16 claimed a double zone of six nautical miles, 34 a twelve nautical mile wide strip of sea and nine states of coastal waters extending beyond it.

UNCLOS I, the first of three conferences to clarify open questions relating to maritime law, took place in Geneva, Switzerland , from 1956 with negotiators from 86 countries . The 1958 conference resulted in four treaties known as the Geneva Convention on the Law of the Sea . UNCLOS II in 1960, at which the previously open question of the breadth of the territorial sea in particular was to be clarified, remained without result. UNCLOS III was opened in New York in 1973 and was not concluded until UNCLOS was signed on December 10, 1982; more than 160 states have ratified the convention so far.

The states that have not acceded to the Convention on the Law of the Sea include the United States . However, the provisions of UNCLOS can also be regarded as valid customary international law for them. 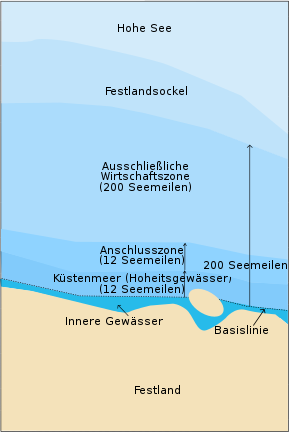 UNCLOS is divided into 17 parts and 320 articles. The most important content of UNCLOS is the regulation of the sovereign powers of the coastal states. Starting from the coastline , UNCLOS defines various, sometimes overlapping zones for the exercise of sovereign power . The control of the coastal state decreases with the distance from the coast. Disputes often arise in the case of straits when the claims to the area to be used overlap.

The territorial sea , also known as territorial or sovereign waters , is the area that extends up to a maximum of twelve nautical miles (22.2 km) from the baseline (usually the low water line , but straight baselines are also possible). All sovereign powers are available to the state in its territorial sea. The twelve nautical mile zone was defined in Article 3 of the UN Convention on the Law of the Sea. In most states, it replaces the three-mile zone (5.56 km) that was previously used.

In the connecting zone bordering the territorial sea, which may be a maximum of 24 nautical miles (44.4 km) from the baseline, the state can exercise the necessary controls to prevent violations of its customs, health and immigration regulations, or violations, that have already been committed in its territory or territorial sea.

In the Exclusive Economic Zone (EEZ) the state can only dispose of natural resources , i.e. marine life and mineral resources, and control economic uses up to an extent of 200 nautical miles (370.4 km) . Beyond that, however, there are no rights arising from the sovereignty of the state. Sovereign powers can therefore only be exercised to a limited extent. The most frequent disputes under international maritime law relate to the use of the economic zone.

In Art. 86, the Convention designates high seas all parts of the sea that do not belong to the exclusive economic zone, territorial sea or internal waters of a state or to the archipelago waters of an archipelago state, according to a United Nations resolution on the Law of the Sea of ​​December 24th 2017 also areas beyond national jurisdiction (ABNJ). According to Article 89, no state may claim to subordinate any part of the high seas to its sovereignty. Rather, the high seas are open to all states, whether coastal or landlocked, and are exercised in accordance with the conditions of the Convention on the Law of the Sea and the other rules of international law (Art. 87).

According to a declaration by the United Nations in 1970, the area and its resources are the “ Common Heritage of Mankind ”. They are managed by the International Seabed Authority .

In addition to the participation of states, UNCLOS expressly provides for the possibility of international organizations to participate. This possibility was tailored to the European Community , which also made use of it. Since the provisions of the Convention on the Law of the Sea extend to matters that the member states of the EC have partially transferred to them, both the EC and the member states have acted accordingly without the authority to conclude a contract; UNCLOS is therefore also referred to as a “mixed agreement”.

Commons : Convention on the Law of the Sea  - collection of images, videos and audio files