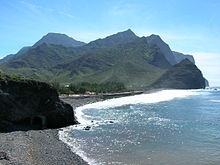 The coastline is the line that separates the land from the sea. It is located on the middle flood line .

Definition of the coastline

The coastline is determined by the coastal state. In Germany, this task is taken over by the Federal Maritime and Hydrographic Agency (BSH) . Only the actual geographic-hydrographic course is decisive. The coastline is defined differently for the North and Baltic Seas :

At the Baltic Sea, the mean water level (MW) is used as the reference level for determining the coastline. This is calculated as a 20-year mean.

On tidal coasts , for example on the North Sea, the mean flood (MHW) applies . This is also calculated as a 20-year mean.

Other calculation methods are sometimes used in other countries. The IHO expresses itself very imprecisely: “The coastline separates the land from the water.” As a result, the coastline would be changeable and would depend on the water level of the tides . To avoid this, more precise definitions are established by the countries.

Importance of the coastline

The coastline separates the sea from the land and thus serves as a case distinction in various laws, for example in the definition of ownership of waters in the tidal area.

“Height” of the coastline

The states use different elevation models and reference levels . Germany has been using the European ETRS-89 since 1991 . Compared to the worldwide WGS 84 there is a height deviation of a maximum of 10 cm if you simply add the current shift of approx. 50 cm towards 41 degrees to the ETRS lat / lon values.

Length of the coastline

The length of the coastline depends on the accuracy of the recording. The smaller the radii, the longer the line ( fractal ) becomes . It also depends on how many islands are recorded and from what size. The CIA gives the length of the worldwide coastline (continents and islands) with 356,000 km.

Today, the coastline is marked by georeferenced aerial photographs taken of the Baltic Sea at the time of mean water or of the North Sea of ​​the MHW, which is influenced by the tides . For the sake of simplicity, the lower vegetation limit is often used as a guide for the coastline.

In general maps and on the Baltic Sea, the coastline is shown as a simple line.

At tidal waters, the coast is bounded by two lines: Below or seaward is the line of the lowest possible tidal water level ( LAT = chart zero ). Above or inland is the line of the mean tidal high water (MTHW). In between is the dry area of ​​the tidal water called the tidal flats . It is represented as a special stretch of coastline, with its creeks and sand banks . The line of mean high water is shown as the coastline. Possibly. the baseline is also displayed (further seaward) .

Change of the coastline

Seen in geological time, a coast represents only a snapshot and is constantly changing. The course of the coast changes primarily due to the effects of ocean currents and tides (tides) as well as the erosive force of the surf . In addition, eustatic sea level fluctuations as well as land elevations and subsidence due to isostatic and tectonic processes also play a role.

In addition to the above-mentioned morphological work of the water on the coasts, these are also strongly anthropogenic today through development (e.g. ports, settlements, coastal protection), use for maritime transport (e.g. transport of goods) and economic use (e.g. Fishing, tourism).