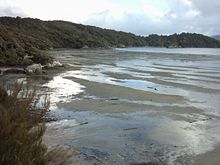 The tidal flats are areas in the intertidal zone of the coast that fall dry at low tide . This can be sand, mixed, silt or rock mud flats. The term Watt is derived from the old Frisian word stem wada "passable by wading, shallow, shallow". Very extensive, from creeks crisscrossed tidelands on flat coasts , together with the surrounding regions such. B. Salt marshes , a Wadden Sea . But there are also mud flats in the bank zone and in the branches of river estuaries. The tidal flats fall dry twice within 24 hours due to the tides and are flooded again twice.

Freshwater mudflats of the lower Wümme at low tide

A typical example is the Wadden Sea on the coast of the German Bight . It formed in the post-ice age as a 10–20 m thick sediment body made of sand and silt in different proportions. This deposits older layers of glacial sediment .

In the intertidal zone of tropical coasts, mangrove forests often dominate , but there are also open tidal flats in the tropics. Conversely, in the brackish and freshwater areas of estuaries, even in temperate zones, there are tidal flats with extensive reeds and a few trees, see freshwater tidal flats .

Above the normal edge of the flood, the mud flats naturally change into salt marshes , which are rarely flooded. A beach has formed in other places . In some coastal areas attempts are being made to use land reclamation measures to convert mud flats first into salt marshes and then into marshland .

Rocky coasts with pronounced surf platforms have a rock floodplain . In Central Europe , for example, rocky tidal areas can be found near Heligoland .

Generally, sand flats have the firmer substrate at low tide , while silt flats are usually relatively flexible. However, there are also places in the sand mud flats where the substrate is very soft and allows great sinking depths ( quicksand ), while silt mud flats can also be firm and resistant. The decisive factor in both cases is the saturation of the sediment with water. The higher the water content in the pore space of the sediment, the more unstable the substrate.

In soil science , mud flats are classified as semisubhydric soils . The corresponding soil type is also referred to in Germany as watt .

Sandwatt has less than 10% silt and clay content. The content of organic matter and water is very low. The mudflats receive more energy from waves and wind and experience considerable rearrangements. As a result, it is also the most oxygen-rich watt.

Mixed wad has between 10% and 50% clay and silt components. The mixing Watt found in sheltered areas in mainland nearby, on watersheds , partly in Surf Protection of the large islands .

Schlickwatt has clay and silt proportions of over 50%. It exists especially in sheltered places, e.g. B. in the interior of bays or in the slipstream of islands. It is less relocated than sand or mixed wad and is therefore particularly low in oxygen. Biodeposition takes place here, so that particularly nutrient-rich areas are formed here. The tidal flats are particularly dark because, due to the lack of oxygen, the reduction horizon, in which hydrogen sulfide, finely divided iron precipitates as iron sulfide and thus turns the ground black, is often only a few millimeters below the surface. The conditions here are very extreme. The fauna and flora of the sea have to tolerate long dry periods, high temperature fluctuations and the low oxygen supply in the soil. Schlickwatt is by far the smallest part of the Wadden Sea. However, since it is often close to the coastline, tourists notice it much more often. 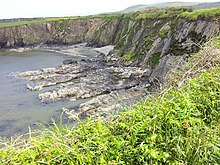 Bay with rock tidal flats between Cwm-Yr-Eglwys and Newport, Wales

Rock mud flats differ fundamentally from sand, mixed and silt mud flats because they are

These are rock platforms that are directly in front of a cliff and are known as surf platforms or rock chutes . Surf platforms are created because coastal erosion affects those areas of the cliff most strongly that are above mean water level, whereas the parts of the cliff that are below this mark are far less exposed to the erosion effects of the waves. The surf ensures the formation of an almost flat rock surface, sloping slightly towards the sea, which in fact represents the “stump” of the already eroded cliff. On a coast with pronounced tides, the landward part of the surf platform falls dry at low tide and is known as the rock tidal flats .

Surf platforms and thus rock mud flats are only created on cliff coasts whose rocks have a minimum level of erosion resistance. B. granite , or certain types of sand and limestone . Such coastal sections then usually also form projections in the coastline, i.e. headlands or capes . If the rock is not erosion-resistant enough, as it is e.g. B. is the case with a claystone or marl , no surf platform can form. In addition, such erosion-prone cliff coast sections usually form bays, in whose calmer waters sediments can collect, so that a beach is created there.

In the general zoning of the sea coast, mud flats belong to the so-called tidal zone (Eulitoral, Intertidal). Many plant and animal species live there and have adapted to the alternation of ebb and flow.

But here too there are significant differences between sediment mud flats and rock mud flats. Many animals live buried in the sediment of sand, mixed and mud flats. Partly just to survive the low water phase, such as B. the beach crab , sometimes constantly, such. B. the cockle or the lugworm .

In the Felswatt, however, there are many animals that are adapted to a life on rocky surfaces. So live there z. B. limpet that cyanobacteria lawn of the rock graze or barnacles , which tacked the rock, nutrient-rich particles from the sea water filtered . While limpets and barnacles protect themselves from dehydration by retaining seawater inside their shells , other animals survive the low water in so-called tidal pools , depressions in the surf platform (including whirlpools ) in which the water remains when the water is low. Such pools are z. B. visited by sea ​​urchins and starfish at low tide. Sea anemones even use them as permanent settlement areas. Numerous species of algae also live in the rocky floodplain.