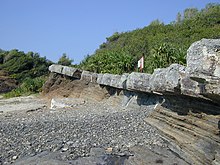 A succession of very soft, brown and gray mudstones, which are protected from weathering by a hard bench made of silica slate above. Paleogenic Ping Chau Formation, Hong Kong.

Mudstone is a pelitic sedimentary rock ( grain size smaller than 0.002 mm) and consists mainly of clay minerals (e.g. montmorillonite , illite and smectite ). Further mixtures are quartz , feldspar and carbonates . Heavily bituminous mudstones are called oil shale . Slate clay stones, which are easily split but not metamorphic on the layer surfaces , are called slate .

Clay stones come in many different colors, such as light to dark gray, black, red and green. Additions of limonite , hematite , chlorite and organic carbon compounds such as bitumen or coal are decisive for the color .

Mudstone, which is transformed under pressure and temperature and usually splits into thin leaves, is called slate . The cleavage surfaces of this metamorphic rock sometimes do not run parallel to the strata.