Glaciologist is forwarding to this article. See also: Glatsiologov Island .

Glaciology is the science of the forms, occurrences and properties of ice and snow, including their formations as glaciers , permafrost and ice shelves . It originated in Switzerland in the 19th century as a glacier science . 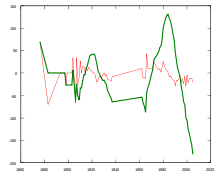 Glaciology is an interdisciplinary science that touches several earth and life sciences :

At the same time, it is one of the most important disciplines in polar research and a data source for climatology .
The presence of ice on Mars and on various moons of the planets of the solar system also gives this science an extraterrestrial component.

Individual areas of this science include:

In Germany, the Alfred Wegener Institute in Bremerhaven is a leading representative of glaciology, as well as the Commission for Glaciology in Munich ( Bavarian Academy of Sciences ), and in Switzerland the ETH Zurich . In Austria it is the University of Innsbruck , the University of Salzburg and the Alpine Club . Some Innsbruck institutes create the annual glacier report with the OeAV glacier measurement service . In numerous other countries, the subject is also processed by research institutes .

The "cradle of glaciology" stood on the Unteraar Glacier in the Bernese Oberland . It was there that the geologist Franz Joseph Hugi carried out his first studies. In 1840, under Louis Agassiz, the first "research station" was built under a boulder, the Hotel des Neuchatelois . Documentation of the condition of individual glaciers has been collected in the Alps for over a hundred years.

In 1891 glacier research began by the DuOeAV , from which today's ÖAV glacier measurement service emerged. The main focus here is length measurement.

On August 21, 1902, the glacier researchers Adolf Blümcke and Hans Hess succeeded in the Hintereisferner in the Ötztal, after many unsuccessful attempts, to drive a borehole 153 m deep down to the bottom of the glacier for the first time. The cost of the enterprise, which amounted to several thousand marks, was borne by the German and Austrian Alpine Association.

The term " Ice Age " was introduced in 1837 by Karl Friedrich Schimper .