View from Niederhorn to Thun and Lake Thun 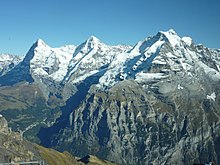 Eiger , Mönch and Jungfrau , view from the Schilthorn .

The Bernese Oberland comprises the rivers and valleys of the alpine Aare and its tributaries in the south of the canton of Bern as well as the adjoining Saanenland ( Gstaad , Saanen ) to the west , whose valley line is not open to the Aare region, but to the cantons of Vaud and Friborg . A line from Gental via Meiringen , Grosse and Kleine Scheidegg, Sefinenfurgge , Hohtürli , Kandersteg , Adelboden to Lenk divides the Bernese Oberland into a northern pre-alpine zone with no summit higher than 3000 m above sea level M. is, and a southern high alpine zone, whose highest peak, the Finsteraarhorn , 4274  m above sea level. M. achieved. Other well-known peaks in this zone are the Eiger ( 3967  m ), Mönch ( 4107  m ), Jungfrau ( 4158  m , on the border with the canton of Valais), Schreckhorn ( 4078  m ), Wetterhorn ( 3701  m ) and Blüemlisalp ( 3664  m above sea level . ).

The steep drop to the north is characteristic of the Bernese side of the Alps, particularly pronounced on the north face of the Eiger , which has a gradient of approx. 3000 m over a distance of only 5 km. Most of the high alpine peaks belong to the autochthonous Aar massif , which ends at the Blüemlisalp, for example. A narrow limestone zone adjoins it to the north . The mountains on Lake Brienz and the pre-alpine zone belong to the Helvetic nappes and consist partly of chalk and partly of flysch . The mountains Niesen and Stockhorn west of Lake Thun are part of the Freiburg Pre-Alps(Cliff and breccia cover ).

The Bernese Oberland was modeled by ice age glaciers and broken down into individual sections. U-shaped valleys accompanied by terraces, e.g. B. the Lauterbrunnen valley , strive towards the Brienzer and Thunersee, which in turn owe their origin to the Aar glacier. Its tongue basin initially extended from Innertkirchen / Meiringen to the Bern area , but was then partially refilled by tributaries rich in debris (plains between Meiringen and Brienz, near Interlaken and between Thun and Bern). However, none of the transverse valleys of the Bernese Oberland runs through the high Alps, so that they hardly play a role for through traffic.

The following mountains are located in the southern alpine zone ( Bernese Alps ):

The following mountains belong to the northern pre-alpine zone and are therefore part of the Bernese pre-Alps :

The Oberland flag was designed by the architect Bernhard von Rodt from Wabern and officially recognized by the government council of the canton of Bern on May 29, 1953.

Ski slope in the Bernese Alps

Thun is the gateway to the Bernese Oberland. At first, tourism was closely linked to the scientific development of the mountains, but then also stimulated by literature such as Albrecht von Haller's monumental poem Die Alpen or by trivial literature such as the story Mimili by Heinrich Clauren .

The main ridge of the Bernese Alps represents a largely insurmountable barrier when traveling south, so that there are only a few connections in long-distance road traffic. The Susten and Grimsel passes , which are only passable in summer, provide a connection with the Urner Reuss Valley and the Goms ( Upper Valais ). The Brünig Pass, which is open all year round, provides a connection to central Switzerland . The Autobahn 6 leads into the area from Bern. At Spiez the Autobahn 6 turns into Autostrasse 8over, which leads along the south bank of the lakes to Brienz and on over the Brünig Pass towards Lucerne .

The long-distance railway crosses the Bernese Alps between Kandersteg and Goppenstein in the canton of Valais in the Lötschberg Tunnel and since 2007 in the low-lying Lötschberg base tunnel between Frutigen in the canton of Bern and Raron in the Valais. These two tunnels are the only year-round traffic connections that cross the main ridge of the Bernese Alps. The Montreux-Oberland-Bahn (MOB) connects the Saanenland with the Lake Geneva region from Zweisimmen , while the Brünigbahn from Interlaken provides the train connection to Central Switzerland.

From 1890 onwards, mountain railways opened up the peaks for tourist purposes. B. Brienzer Rothorn , Niesen , Schilthorn . The Wetterhorn elevator to the Wetterhorn was the first cable car in Switzerland. Of the four originally planned sections, only the first was built. It opened in 1908 but was only in operation for a few years.

The Jungfraujoch ( Top of Europe ), accessible by a rack railway, is one of the most popular tourist destinations in the region. The former longest cable car in the world, the Grindelwald – Männlichen cable car, leads from Grindelwald up to the Männlichen .