The district of Goms ( French District de Conches ) is located in the canton of Valais in Switzerland . The main town is Münster  in the municipality of Goms . 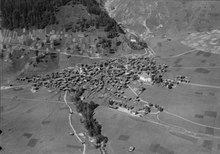 The uppermost valley section of the Upper Valais between the source of the Rhone and the valley step of Grengiols near Brig is called Goms . It is the easternmost part of the canton of Valais . In the east it is bounded by the Furka Pass , which lies between Galenstock and Pizzo Rotondo , and visually in the west by the Weisshorn . The uppermost section of the valley is still called Obergoms .

The Goms was carved out by the Ice Age Rhone Glacier . Then the valley floor was filled up by the Rotten , the young Rhone.

The Goms was inhabited as early as the Stone Age and was part of the Raetia province during Roman rule. The Alemanni invaded the Grimsel around the 9th century and overlaid the Franco-Provencal- speaking pre-population. In 1362 the Goms allied with the original cantons of the old Confederation .

The hotelier César Ritz was born in the Goms district in 1850.

See also : History of the Valais

The district consists of the following municipalities:
As of January 1, 2017

Roads into Goms lead from the north through the Lötschberg tunnel (car transport), from the east and south through the Furka base tunnel (car transport) with loading stations in Realp and Oberwald or in summer over the Furka pass , Grimsel pass and Nufenen pass or over the Simplon pass . From the west you can reach Goms via Sion along the Rhone Valley towards Brig . With the Matterhorn-Gotthard-Bahn , Goms can be reached by train from the west via Brig and east via the Furka tunnel. The Glacier Express travels through Goms on its route from St. Moritz to Zermatt .

Due to its altitude and the alpine high valley, the Goms is a cross-country skiing area with guaranteed snow. Around 100 km of trails are available for cross-country skiers and skaters in winter. The trails connect twelve Goms villages with one another. There is also a night trail (4 km) between Obergesteln and Ulrichen and a dog trail (2 km) between Gluringen and Biel . The main trail is the flat Rotten trail (22 km) along the young Rhone. The Sonnenloipe (8 km) is located on the north side of the high valley.

In Obergoms there are also 85 km of winter hiking trails and 27 km of snowshoe trails. There is a Matterhorn Gotthard Railway station in every village .

View over the Goms from the Bellwald

The Goms from the air

Around 700 km of marked hiking trails are available in summer. The Gommer Höhenweg , the Rottenweg in the valley floor and the hilly forest path on the south side of the valley connect the villages in Goms. A bicycle route runs along the course of the young Rhone from Oberwald to Brig .

The historic trains of the Furka mountain route steam train have been running completely between Oberwald and Realp UR in the canton of Uri again since 2011 .

The Binntal , a remote side valley of the Goms, became famous for its mineral wealth . The whole valley is protected as a "landscape of national importance". The Albrun Pass has served as a transition to neighboring Italy since the Stone Age . The Walser took this route in the 13th century.

The adjective related to Goms is Gommer and not Gomser .

Districts of the canton of Valais

Cultural assets in the district of Goms / District de Conches

List of cultural assets in the canton of Valais