This article deals with the Alemannic ethnic group of the Walser. For further meanings see Walser (disambiguation) .

Walser house in Alagna Valsesia , with prefabricated "arbors" for drying the hay

The Walser ( Rhaeto-Romanic Gualsers ) are an Alemannic ethnic group in the Alpine region. From the late Middle Ages they settled, starting from the Upper Valais , mostly alpine areas in the Swiss canton of Graubünden , in the northern Italian Piedmont and Valle d'Aosta , in Liechtenstein , in the Austrian Vorarlberg and neighboring Tyrol and occasionally also in the Bernese Oberland , in Savoie , in Bavaria and elsewhere. Around 150 Walser settlements are still spread over a length of around 300 km in the Alpine arc.

In many places, the descendants still speak a highly Alemannic dialect, Walser German .

In the 9th century the Alemanni reached on their migration from the Bernese Oberland ago the Goms in the Wallis and populated by little the upper Rhone valley .

In the 13th and 14th centuries, individual groups of these Alemanni left the Rhone Valley and its side valleys and moved to further high valley levels in the Alps.

The historical background of the Walser hike has not yet been fully clarified. One reason for the medieval whale migrations could have been the growing population pressure and the search for new agricultural areas. The Wals migrations are here in a similar context to the German east settlement . The Walsers developed techniques that also made it possible to cultivate high mountain regions. The rulers of the areas concerned promoted this settlement through tax exemptions and the granting of special colonist rights . Thus, the new development of land offered the Walsers the opportunity to free themselves from feudal serfdom . The Walsers were also called "Free Walsers" because of their own legal constitutions. In particular , Walsers from the Walser village of Gressoney have been known as peddlers , traveling traders and later settled merchants in German-speaking Switzerland and southern Germany since the 16th century .

A representation of the times of change in the mountain farming regions and the Walsers was filmed in the 9-part TV production Die Fifth Saison with Dietmar Schönherr in the early 1980s . The Vorarlberg writer Adalbert Welte has processed the Walser migration in various literary terms.

The migrations of the Walser

The migrations of the Walser were favored by the mild climate prevailing at this time . Their migrations led, among other things, north to the Bernese Oberland and west to Chablais in France. Above all, however, the Walsers were drawn to the south in the high-lying Piedmontese Alpine valleys and in several phases to the east. They settled in remote areas of the Bündner Oberland, the Rhine Forest and the Upper Landwasser Valley and from there other remote areas of the Canton of Graubünden . They also settled in the Weisstannental in the St. Gallen Oberland, the highest regions of Liechtenstein , high valleys in Vorarlberg and isolated areas in Tyrol .

The following is a list of the areas populated during the Wals migrations:

The culture and language of the Walser has partly remained alive today; the High Alemannic dialect stands out from the High Alemannic dialects of the Graubünden and the Middle Alemannic dialects of the Vorarlberg area. A typical characteristic that defines Walser German is the sch sound in words like schi ' sie ' (singular and plural), böösch “böse”, ünsch / iisch “us”, Müüsch / Miisch “mice”, Hüüscher / Hiischer “houses”. Other features of Walser German are more general West or South West Alemannic dialect features, which, however, in Graubünden and Vorarlberg clearly stand out from the features of the Southeastern German dialects there, so that they also have a defining character there. These include the present tense forms he geit / gäit, schteit / schtäit "he goes, stands" (also in Bern German , but in the neighboring non-Walser dialects he gaat / goot, schtaat / schtoot ) or the two-syllable plural of the strong masculine like Taga, Tage "Tage" (in the neighboring dialects, however, apocopied and often umlauted Taag or Tääg ). The same applies to initial / k / postponed to / ch / as in Chind “Kind”, which is a widespread feature of the High Alemannic dialects, but does not occur in the neighboring dialects of the Chur Rhine Valley, Liechtenstein and Vorarlberg.

The inhabitants of the Walser villages in the canton of Graubünden stand out linguistically in areas where Romansh is spoken in the area . For example, German is spoken in the municipality of Obersaxen , while the Rhaeto-Romanic dialects are predominantly spoken in the entire rest of the Vorderrhein area . 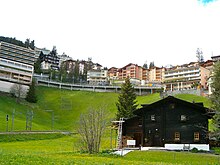 Walser house in the tourist area of ​​Arosa, the venue of the International Walser Meeting 2016

Since 1962 the International Walser Association (IVfW) has held an international Walser meeting every three years. The main purpose of the meetings is the regular maintenance of the common cultural heritage at different settlements with a Walser background. The meetings took place in the following locations:

The following two works, which laid the foundation for modern Walser research, are of greater interest in the history of science: