The title of this article is ambiguous. Further meanings are listed under Monte Rosa (disambiguation) .
p1 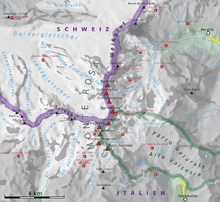 The Monte Rosa is an extensive mountain range in the Valais Alps , on the border between Italy and Switzerland . Its main summit , the Dufourspitze , is at 4634  m above sea level. M. the highest point in Switzerland and the entire German-speaking area. The border summit at 4618  m (south of the 4515  m high Silbersattel) is the highest peak of Monte Rosa in Italy.

About two thirds of Monte Rosa belongs to Italy and about one third to Switzerland. From Piedmont , Valle Anzasca and Valle Sesia reach up to the eastern foot of the massif. The 2200 and 1500 m high east walls of Monte Rosa each form the end of the valley - in the case of the Anzasca valley the Macugnaga wall and in the case of the Valle Sesia the Sesia wall (Parete Valsesiana). From the south, from the Aosta Valley , the valley of Gressoney ( Lystal ) extends to the south-western edge of Monte Rosa, which is most easily accessible here via the Lis Glacier. In the north-west, the valleys of the Gorner glacier and the rugged Grenz glacier lead from Zermatt at the beginning of the Mattertal in the Valais up to the summit region of Monte Rosa.

The commonly named peaks over 3950  m in the Monte Rosa massif are:

The Dunantspitze is a secondary peak of the Dufourspitze. The border summit does not meet the summit criterion, but it is the highest point in the Monte Rosa massif, which lies on Italian soil.

The peaks of Monte Rosa are among the highest in the Alps . Only the Mont-Blanc massif is higher, but due to the larger glaciation it has less named peaks over 4500  m and does not take up more area in comparison.

The Monte Rosa dominates the whole of western northern Italy and therefore has its name. This does not come directly from the color of the glaciers in the morning and evening light, but from the word rouese , which means “glacier” in “ Patois ” (meaning the Franco-Provencal language of the Aosta Valley).

From Switzerland, on the other hand, Monte Rosa is mainly visible from Ticino and from the heights above Zermatt. The Italians also include the Liskamm ridge as part of Monte Rosa, as it seems less separated from the massif from the southeast than from the northwest.

The Dufourspitze , best visible in Switzerland , used to be called the Gornerhorn, but was renamed in honor of the Swiss General Guillaume-Henri Dufour .

The nomenclature in the area of ​​Monte Rosa is noteworthy. The massif itself has an Italian name. Apparently there is no German name. In contrast, the individual peaks all have German names, although Italian names exist only in individual cases, especially subsequent Italianizations. This also applies to the Zumsteinspitze , Balmenhorn and Vincent-Pyramid peaks located entirely on Italian soil or developed and named from there , as well as to the Liskamm , and also to the appendages Fillarhorn, Jägerhorn and Punta Grober. The background is that the Monte Rosa has been inhabited all around since the Middle Ages by German-speaking Upper Valais and (in some places all three valleys on the Italian side) Walsers ( highest Alemannic dialects ). These apparently coined the names of the individual peaks, while the massif as such emerges mainly from the Italian lowlands.

In French , the mountain is called Mont Rose , so the common name of the mountain is simply translated or colored (analogous to Mont Blanc - Monte Bianco). Two of the neighboring regions, both Wallis and Aosta Valley, are predominantly (in the Aosta Valley at least historically seen) French-speaking (and Franco-Provencal) - although not in the immediate vicinity of the mountain. Still, the Italian naming seems to be the most influential.

The Monte Rosa hut of the SAC stands at 2883  m above sea level. M. at the north-western foot of the Monte Rosa massif on a sloping rock plateau called "Plattje". For the 150th anniversary of ETH Zurich , the “mountain hut of the future” was built in 2008. The new hut replaced the mountain hut from 1894, which was almost 100 m lower.

The Signalkuppe / Punta Gnifetti carries the highest hut in the Alps , the Capanna Regina Margherita ( 4554  m ). Several high-altitude medical research projects have already been carried out on this so-called "headache box" .

Walsers from Gressoney undertook the first documented alpine tour in the high region of Monte Rosa in 1778, 1779 and 1780 in search of the “lost valley” (lost valley ) described in their treasure trove of legends . You reached the top of the Lis Glacier (Entdeckerfels / Roccia della Scoperta , 4178  m ). The Punta Giordani, the closest to the valleys of Gressoney and Alagna, was climbed by Pietro Giordani in 1801. This was followed by the Vincent Pyramid by u. a. their namesake Johann Nikolaus Vincent on August 5, 1819 and the Zumsteinspitze by u. a. Joseph and Johann Niklaus Vincent, Joseph Zumstein, Molinatti and Castel on August 1, 1820, both over the Lis Glacier.

The other high peaks followed later: The Signalkuppe reached after three unsuccessful attempts by the pastors of Alagna , with Giovanni Gnifetti, Giuseppe Farinetti, Cristoforo Ferraris, Cristoforo Grober, the brothers Giovanni, Giacobbe Giordani, and two porters. The ascent of the Dufourspitze took place from the Swiss side on August 1st, 1855 by Charles Hudson , John Birbeck and Christopher and James G. Smyth with Ulrich Lauener and Matthäus and Johannes Zumtaugwald . The north end followed on August 26, 1861, the Parrotspitze on August 16, 1863. In 1893 the Club Alpino Italiano built the Capanna Regina Margherita on the Signalkuppe.

From a mountaineering point of view (and for steep-wall skiers), Monte Rosa is particularly interesting because of its eastern walls. The easily accessible high peaks between Zumsteinspitze and Ludwigshöhe are sometimes overcrowded in good weather.

The usual access today, as far as the central and southern peaks are concerned, is from Passo dei Salati ( 2936  m ) at the southern end of the massif. A cable car leads to it from Alagna in the furthest Valle Sesia and a lift from Gressoney. When the ski area is open in winter, you can currently take the cable car up to Punta Indren - this option is often used by freeride skiers and ski mountaineers as a welcome aid on the way to the Gnifetti hut (or the Mantova hut ). From Passo dei Salati, the ascent leads over the Stolemberg, which is secured with fixed ropes , to the Lys Glacier, which can also be reached more strenuously directly from Gressoney. The two northern peaks, Nordend and Dufourspitze, are mainly approached from Zermatt via the Monte Rosa Hut , which can be reached from the Rotenboden station of the Gornergratbahn .

The entire massif consists mainly of granite and granite gneiss , which in turn consist mainly of quartz , potassium feldspar , albite and light mica . Since the metamorphosis of such rocks takes place at greater depths, this suggests that the entire area was earlier much deeper and was later brought to the surface. This initially took place in the form of a tectonic nappe , the Monte Rosa nappe. After thrusting the ceiling on the underlying rocks today, the entire stack was in a second mountain building phase greatly lifted again.

About 100 million years ago, in the Middle Cretaceous , today's Iberian Peninsula was shifted to the southeast by the opening of the North Atlantic and, detached from Europe, became an independent microcontinent (Iberia), the northern tip of which was the so-called Briançonnais Peninsula which eventually also the Monte Rosa massif was created. To the north of it, a new sea opened up, the Walliser Ocean ( Valais Ocean ). In the south of Iberia there was another ocean, the Piedmont Ocean , also called the Alpine Tethys .

At the same time, the smaller Apulian plate (Apulia), which belongs to the large African plate and which formed the southern shore of this ocean, began to shift northwards - much faster than its African mother continent, so that Apulia separated from Africa. Due to the resulting pincer movement between Iberia in the north and Apulia, which is approaching from the south, the Piedmont Ocean inevitably had to close: At its southern edge it began to subduct under the Apulian continental margin .

After the Piedmont Ocean, the Briançonnais was also included in the subduction, followed by the Valais Ocean. In the Eocene (50–40 million years ago) the clash finally began between Apulia, the subducted remnants in front of and below its northern edge on one side and Europe on the other. During the orogeny (orogeny) 35 million years ago, the mutual thrust of rocks thickened continental crust, the rocks fell down, fell into greater depth and high pressure and high temperatures have been suspended. This made them more plastic , rock formations started to move, overlapped and deformed. At this point in time the tectonic nappes, including the Monte Rosa nappes, were formed. Finally, 20 million years ago, a strong deformation of the Penninic led to its final folding and uplift, and the erosion of the Alps began, leading to the rugged mountains that are visible today.