The mountain formation or orogenesis (composed of the Greek words ὄρος óros 'mountain' and γένεσις génesis 'emergence, procreation, birth') is caused by tectonic processes , which in many cases are directly generated by the displacement of continental plates. Special cases of orogeny concern the formation of rupture clod mountains and rupture fold mountains , which are not directly created by the displacement of continental plates.

Orogenesis used to be understood as a time-limited process, as only the processes that determine the structure of the affected rocks were considered. However, the investigation of active orogenes such as the mountains on the Pacific coast of America shows that these are often prolonged and continuous processes.

According to today's understanding, mountain formation can be traced back to plate tectonic processes with a few exceptions . The type of rock , its internal structure and the water content of the sediments involved influence the process, as do external influences such as climatic factors and erosion processes . They determine the shape of a mountain range ( orogen ), how high it will be at a certain rate of uplift, and how long it will take to build up or gradually level it.

According to earlier beliefs, orogenesis was preceded by the formation of a so-called geosyncline : a large depression in which thick layers of deep sea and other sediments were deposited before the subsidence became an uplift area due to large tectonic processes . These rocks were later transformed and sometimes shifted over hundreds of kilometers, so that they can be found in the mountains today. According to today's ideas, the "geosyncline" corresponds to the ocean or marginal sea located between the continental plates involved in plate tectonic processes. 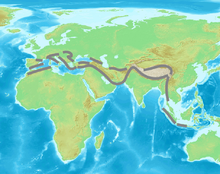 Scheme of the Alpid mountain belt

According to the theory of plate tectonics, the earth's surface is made up of larger and smaller lithospheric plates ("continental plates "), which move against each other at a rate of a few centimeters per year. In some places these plates move towards each other, or rather one plate slides over the other. This is known as convergence . From a geotectonic point of view, continents are crustal areas with relatively strong upwelling . As a rule, lithospheric plates not only bear continental crust , but continental blocks regularly collide over the course of many millions of years in the course of plate convergence. This leads to intensive compression processes at the edges of the colliding continental blocks. As a result, a mountain range forms along the collision zone . So the Himalayas came into being when the Indian continental block met that of the Eurasian plate . Around the same period, around 50–30 million years ago ( Eocene ), the folding of the Alps also took place through the collision of the continental block of the African plate with that of the Eurasian plate. Such mountains are called collision mountains .

If a continental plate meets an oceanic plate, the oceanic plate mostly plunges into the earth's mantle due to its higher density and magmas are created in the course of the drainage of the plate. This is known as subduction . Earthquakes often occur in the subduction zones . Above the subduction zones there are volcanoes of the explosive type. Mountains are created by the tectonic upheavals / thrusts, but also by the rising of magmas that arose during subduction in the earth's interior. The Andes are a result of the collision of the Nazca plate with the South American plate . Other examples are the North American Cascade Mountains and the Japanese Islands .

When oceanic plates collide with others, there is sometimes no complete subduction of the oceanic crust. Parts of the oceanic plate are scraped off from their base and pushed onto the upper plate ( autopsy ). Such rock bodies can be found in many mountains, mostly as lens-shaped and not very extensive occurrences. The rocks exposed there are called ophiolites and have a very characteristic formation that differs significantly from the surrounding rocks. In rare cases, larger parts of the ocean crust are autopsied, for example in the ophiolite complex of Oman .

The role of erosion in mountain formation

Even during the formation of a mountain, erosive forces become effective as soon as the mountain body rises above its surroundings. Physical factors (solar radiation, thawing and re-freezing of the rock), chemical processes and mechanical factors (mainly due to glaciers and flowing water) play a decisive role. Depending on the rate of uplift of a mountain range in relation to the rate of erosion, the result is whether a mountain is gaining in height or is being eroded faster. In principle, higher mountains have higher erosion rates, since the relief energy of high mountains is higher than that of low mountains and this in turn is higher than in flat areas. The higher erosive effect of a raging mountain stream compared to a meadow meandering on the plain is easy to imagine. In general, denudation , the extensive erosion caused by frost, for example, has a stronger effect than the linear erosion of a river.

Mountains are in a kind of swimming equilibrium ( isostasy ) with the tough plastic mantle below . The mountain block dips so deep into the mantle that the mass of the displaced mantle rock corresponds to its own mass. This is comparable to ships which, according to Archimedes' principle, dive deeper into the water the heavier they are.

A mountain massif protrudes about 5 to 6 times its height above sea level into the earth's mantle. If rock is removed by erosion on the surface, the entire mountain range rises until around 80% of the removed rock mass is replaced. Even if the tectonic upward movement has long since come to a standstill, mountain regions can remain at their altitude for many millions of years before erosion gains the upper hand.

Phases of ore formation in the history of the earth

The subdivision of the geological development of Europe into four main phases of mountain formation goes back to Hans Stille : the Fennosarmatic , Caledonian , Variscan and Alpidic phases.

Almost all of the “young” fold mountains on earth were created in the last 20 to 40 million years during the alpine mountain formation, the last of these phases. During this phase, the High Atlas , the Pyrenees , the Alps and the Carpathians , the Dinarides , the mountain ranges of Turkey , the Zagros Mountains in Persia, the Himalayas and the western mountains of Burma , Thailand and Indonesia were created . In today's Alpine region, the parent rocks were deposited in several sea areas; The sea sediments formed at that time were up to a few kilometers thick and were unfolded into a mountain range in a complicated process, the main phase of which began around 70 million years ago. After the strongest uplift phase (around 25 million years ago), the erosion furrowed the extensive uplifted area in tectonic weak zones through long and shorter valleys . The uplift of the Alps continues to this day (at 1–3 mm per year), it is offset by roughly the same amount of erosion.

For historical reasons, the names of Hans Stille are still used today, partly not only in Europe, but also on other continents. In addition, there is a large number of names for orogenesis, which are derived from the mountains of the respective region. Characteristic designations mostly more or less extensive or classified as significant orogenesis of the earth's history are listed in the following table.