Ophiolites are components of the oceanic lithosphere (specifically the oceanic crust ), whose mainly basic and ultra- basic rock series of the ocean floor were pushed (" autopsied ") onto the mainland in the course of an ocean-continent collision (e.g. Andes ) . However, the term ophiolithic is also used for ceiling complexes that no longer have any direct reference to the oceanic crust, but are only typical of ocean-continent collisions. 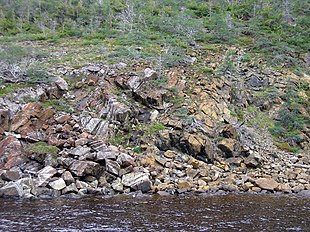 The word ophiolite is derived from ancient Greek and is composed of ὄφις (ophis) = snake and λίθος (lithos) = stone, to designate green-colored rocks with a snake-like texture (mainly serpentinites , but also spilites ). It was used for the first time in 1813 by Alexandre Brongniart for a socialization of green rocks in the Alps (for serpentine rocks with diabases ). Later (1905 and 1927) the German geologist Gustav Steinmann modified the term in such a way that, in addition to the serpentinites, it also contained pillow lavas and radiolarites (the so-called Steinmann trinity ).

An ophiolite complex ideally consists of the three large rock units of the oceanic crust. From hanging to lying are:

Most ophiolite complexes, however, are rarely complete and therefore only show parts of the classical sequence.

The sequence in detail:

Under the sediments lie igneous rocks of the oceanic crust:

Pillow lavas from an ophiolite sequence in the northern Apennines , Italy

In the hanging wall, extrusive layers of pillow lavas , the spaces between which are filled with hyalite or hyaloclastite (the fragments of the glass skin of the individual pillows) and marine sediments through contact with seawater , whereby the proportion of sediment filling decreases towards the lying surface . The speed of the P waves is 2.8 to 4.5 km / s here.

In the footwall a rock package of vertical follows transition hosts ( engl. Sheeted dykes ), by means of which the magma of the pillow lava rose to the surface. Wave speeds of 4.5 to 5.7 km / s are achieved in this section.

This is followed by intrusive gabbros , the plutonite equivalents of the basalts . They are much coarser-grained as they had more time to form large crystals due to the slower solidification. They can be classified into two types divide isotropic at higher altitudes, fractional gabbros, which in turn layered gabbros (engl. Layered gabbros ) formed by Kumulatkristallisation a magma chamber overlap. The p waves come here at speeds of up to 6.7 km / s. A curiosity in this area is the occurrence of individual acidic intrusives such as plagiogranites , diorites or tonalites , especially since there are no intermediate rocks.

From a mineralogical point of view, the basic rocks of the oceanic crust consist mainly of plagioclase and pyroxenes (clino- and orthopyroxes).

The part of the mantle belonging to the lithosphere also comprises two rock units, which are separated from each other by the seismological Moho . The upper part consists of cumulative peridotites ( dunite- rich layers). The underlying peridotites - mainly Harzburgites and Lherzolites composed of olivine and pyroxenes - show shear structures caused by tectonic movements . They can also be mylonitized (caused by very intensive tectonic stress) and are then mostly subject to secondary water absorption, which changes the primarily igneous mineral stock ( serpentinization ). Seismic waves propagate in the cumulative peridotites with only slightly higher velocities than in the igneous rocks. However, at the seismic Moho, which lies below the sea floor at a depth of about seven kilometers, these rise by leaps and bounds to an average of 8.15 km / s. At mid-ocean ridges (MOR), however, the value can drop to 7.6 km / s.

If the former continental margin was also autopsied, turbidite sequences can also be added to the geological-genetic unit of the ophiolite .

Problematic allocation of the educational area

In the course of the development of plate tectonics in the late 1950s and early 1960s, the idea prevailed that ophiolites are directly connected to the principle of ocean floor spreading on mid-ocean ridges, which was underpinned by the magnetic work of Frederick Vine and Drummond Matthews in 1963 . In addition, Ian Graham Gass's investigations in 1968 on the vertical veins of the Troodos ophiolith in Cyprus also suggested an ocean floor spreading. This conclusion, taken up again by EM Moores and F. Vine in 1971, was generally accepted until the 1980s.

However, more precise geochemical and petrological studies had in the meantime uncovered problems with this somewhat simplified assignment:

All these geochemical differences can only be explained if it is assumed that a formation of the ophiolite not divergent, but mainly at convergent oceanic crust areas (subduction zones) - the so-called Suprasubduktionszonen-ophiolites in forearc area ( English suprasubduction zone ophiolites or SSZ ophiolites ) .

The convergent suprasubduction phioliths can be divided into two types:

These two types of ophioliths differ fundamentally in the way they are seated: the alpinotype ophiolites were autopsied on a passive, partly thinned continental margin, whereas a large part of the cordillera ophiolites were passively pushed out by the accretionary wedge placed under them ( accretionary uplift ).

Of course, ophiolites also form at divergent oceanic spreading centers, at hotspots and on deep-sea mountains , as well as in the interarc and backarc area, but they are only rarely autopsied and are therefore rarely preserved. The Ligurian ophiolite and the Franciscan ophiolite can be seen as examples of oceanic centers of expansion .

Ultimately, the decisive factor is the extent of the partial melting in the upper mantle, with the spectrum ranging from a relatively low degree of melting at spreading centers (Ligurian type with lherzolite as mantle rock) to significantly higher degrees in suprasubduction phiolites (Yakuno type with clinopyroxene-containing resin burgite and Papua type with clinopyroxene-free Harzburgite) is sufficient. Parallel to this, the development of the separate basaltic magmas goes hand in hand: it runs from alkali basalts or aluminum- rich basalts (MORB) via aluminum-poor basalts (island arc holeiites) to boninites and magnesium-rich andesites .

Each of these ophiolite pulses can be correlated with major orogeny phases . Pan-African orogenesis occurred roughly at the same time as the maximum of the cryogenium ; the early Paleozoic ophiolites appear at the same time as the Caledonian belts of the Appalachians , Caledonids and the Urals , while the Mesozoic ophiolites dominate the Alps - Himalayan belt. The Circumpacific Belts contain ophiolites belonging to the last two pulses. Long-lasting, continuous ore formation processes in the Pacific region based on subduction of oceanic crust with accompanying accretion are thus documented . They stand in contrast to the relatively short-lived, episodic continental collisions.

Ophiolites can mostly be found in suture zones. Here, after subduction is complete, oceanic crust sections are stored between colliding continents, continent fragments or island arcs . However, the model concept based on a pure continent collision led in the past to a misinterpretation in the case of the Yarlung-Tsangpo-Suture (also Indus-Yarlung-Suture), since it was probably only a relatively small sea basin (a so-called backarc Basin ) and thus not the expected great suture between Eurasia and India .

Probably the most famous example of ophiolites (semail ophiolite) is in Oman and the United Arab Emirates , where the former oceanic plate of the Neotethys area was pushed onto the Arabian plate. Other significant deposits can be found in Cyprus , southern Spain , Switzerland , Morocco , New Guinea , Newfoundland and California .