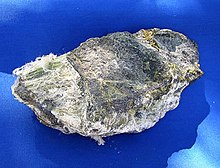 The serpentine group , (lat .: serpentia , Greek .: Ophit , snake stone ) refers to a group in the monoclinic crystal system crystallizing silicate - mineral with the chemical composition (Mg, Fe, Ni) 6 Si 4 O 10 (OH) 8 . The metal atoms in brackets can be any mixture, but are always in the same relationship to the other atom groups. Serpentine has a relatively low hardness of 2.5 to 4, a mostly olive green, but occasionally also yellow, brown, red, gray, black or white color and a white stroke color .

The serpentine group belongs to the tri- octahedral phyllosilicates . Different minerals of this group, such as chrysotile , are as asbestos referred

The name serpentine comes from the late Middle Latin (gemma) serpentina or (lapis) serpentina and is derived from the originally Latin word serpens for snake . It is believed that the name was derived from the mineral's speckled color, similar to the characteristic drawing of snakes. The Latin lapis serpentinus corresponds to the ancient Greek λίθος ὀφίτης [lithos ophites] (after Diosk. V 143, ὄφίς snake).

Lizardite with magnesite and hematite

Chrysotile asbestos made from serpentine dolomite

According to the classification of minerals according to Strunz (9th edition) , the following minerals belong to the serpentine group:

As Bastit a pseudomorph of the serpentine minerals according Orthopyroxenen , z. T. also called clinopyroxenes.

Some serpentines are only apparently leafy, on closer examination they consist of waves with a wavelength of about 3 to 10 nanometers ; these structures are also referred to as modulated structures . Differences in morphology result from the adaptation of the narrow tetrahedron layer in the case of chrysotile and the larger octahedron layer in the case of antigorite. In these two varieties, the tetrahedra are tilted a little so that the tip oxygen atoms move away from each other and thus align with the oxygen atoms of the octahedron layer.

Serpentines are secondary minerals and are formed when magnesium-rich orthopyroxenes or olivines are converted into peridotites . They are the main component of the metamorphic rock serpentinite . Usually deep rocks are converted into serpentinites in subduction zones . Partly one can still see former structures of the original rocks.

Serpentine minerals are also formed in processes of low-grade metamorphosis (in the green slate facies ) or hydrothermal metasomatosis (on the ocean floor in volcanic rocks containing olives) through the action of water on olivine.

Locations of serpentinite rocks include Erbendorf in Bavaria as well as in Zöblitz and near Hohenstein-Ernstthal in Saxony in Germany; in the Alpes-de-Haute-Provence department in France; in the Aosta Valley , near Sondrio and Val Polcevera , in Liguria and near Prato in Italy; East Tyrol , in Bernstein in Burgenland, near Oppenberg in Styria and in the central Ennstal in Austria; the southern Urals in Russia; in the Swiss cantons of Graubünden , Uri and Valais ; as well as in many regions of the United States .

The occurrences near Larisa in Greece are of ancient importance . There are smaller minable deposits in Great Britain, Croatia, Spain, Poland and the Czech Republic. Important non-European deposits are in China, Guatemala and India, the Republic of South Africa, Taiwan, Turkey and Zimbabwe.

The massive pieces of serpentinite stone are still used in architecture and handicrafts today. They can be sawn, cut and turned when they are moist in the mountains , and polished to a high gloss when dry; therefore they are used to make vessels, devices (formerly insulators), table tops, cladding panels, tombstones and architectural parts.

The mineral group Garnierit is a component of nickel - ores and for obtaining this metal particularly in New Caledonia degraded.

Chrysotile (a type of asbestos) was mixed with cement and used in the construction industry until the 1990s because the material is very flame-retardant and chemically inert. Only later did it emerge that chrysotile, like other asbestos minerals, is a hazardous substance in its fibrous form , as the fine individual fibers are easily detached and inhaled can cause lung cancer (asbestosis) and mesothelioma.

Through Pliny the Elder it is handed down that the serpentine should be "good against snakebite". It was also ascribed the ability to render poisons harmless or to indicate them by bursting, which may have promoted the production of cups and goblets from this material.

Since the middle of the 16th century, the serpentine produced by Zöblitz has been used for architectural parts, e.g. B. turned balusters and polished cassette fields are used. The resemblance to veined types of marble and the ease of polishing contributed to the mineral's popularity. In the 17th and 18th centuries, special works were provided with gold-plated silver mountings (examples in the Green Vault , Dresden), while others were also mounted with tin mountings. Architects used serpentine to furnish the Dresden Hofkirche (1739–1755) or the Semperoper (1871–1878).

Due to their partly lively color patterns, various rough serpentines are also processed into gemstones .

Fibrous chrysotile asbestos is a carcinogenic material. The other non-fibrous serpentine varieties, however, are considered harmless. During processing, however, measures to protect against inhalation of dusts must be taken, as otherwise silicosis or lung cancer can also be triggered.