Pseudomorphosis is a term from mineralogy and describes a mineral that does not show its typical own shape ( crystal system ), but has taken on the external form of another type of mineral. Pseudomorphoses arise, for example, when mineral A first crystallizes in a rock, is later dissolved away and the cavity is filled with mineral B.

The original mineral does not necessarily have to be replaced by another mineral. In the case of the halite pseudomorphoses, halite crystals were dissolved away and the cavities filled with clay-silty sediment. This sediment later shows the cube-shaped outline of the cubic NaCl crystals.

According to Strunz, pseudomorphoses can be classified as follows:

Paramorphoses arise with polymorphic substances, i. H. for elements or connections that occur in several modifications. The carbon as an element, for example, as graphite or diamond found in nature. As a paramorphosis z. B. denotes a hexagonal high quartz, which has formed at a temperature of over 573 ° C and, when cooled, transforms into the phase of the trigonal low quartz, which is more stable under ambient conditions, without losing the external shape of the first high quartz. Further examples of paramorphoses are

The respective crystal system of the mineral, which is decisive for the shape of the crystal, is indicated in brackets. 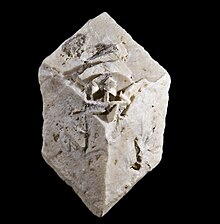 The name "glendonite" refers to a pseudomorphism from calcite to Ikait . Ikait CaCO 3  · 6 H 2 O forms in seawater near the shore at temperatures close to freezing at 0 to 4 ° C. Soft sediments that are rich in organic material, carbonate-rich fluids and calcium-rich seawater are also important for the formation of Ikait. If Ikait is recovered, i. H. withdrawn from the cold sea water, it converts to Greinert and Derkachev at about 5 to 10 ° C in calcite CaCO 3 in order. The water bound in the crystal lattice is released without the Ikait losing its shape. However, this conversion is associated with a significant volume reduction. Pores are formed in the calcite that can be seen with a magnifying glass or under a microscope. The hedgehog or star-shaped glendonites from the White Sea (Olenitsa, Russia), which can often be admired on mineral markets, are known.

The well-known soapstone pseudomorphoses from the Johanneszeche near Göpfersgrün, Fichtelgebirge are an example of the formation of pseudomorphoses through the absorption of components . Here, for example, quartz crystals were dissolved by thermal water ( silica ) and magnesium was added in the form of Mg 2+ ions through the existing dolomite MgCO 3 , from which the soapstone (dense talc) is then under a layer of colomorphic soapstone (made of magnesium silicate gel Soapstone).

The beautiful pseudomorphoses that can be found in almost every mineral collection were created. The many small flakes of talc can easily be seen under the microscope, which as a whole take the form of a beautiful, white “quartz crystal”.

Pseudomorphoses from malachite to azurite , known from Tsumeb , Namibia, resulted from the exchange of constituents (anion exchange).

The conditions under which either malachite or azurite are formed were investigated experimentally by Menschel and Usdowski. The decisive factor here is the proportion of CO 2 gas in the copper-containing solutions flowing past. If the CO 2 gas content corresponds to 0.5% by volume, then both azurite and malachite can form from the H 2 O-Cu 2+ -CO 2 solution. Larger CO 2 proportions - corresponding to a proportion of carbonic acid greater than 0.0136 g / l - lead to the formation of azurite, smaller ones to malachite. Since normal rainwater usually has a relatively small proportion of carbonic acid, malachite is more common than azurite.

Koritnig describes in detail how the formation of pseudomorphoses takes place. First, a carbonated solution causes azurite crystals to form. If the carbonic acid content of the solution flowing past decreases, then azurite is no longer stable and, starting with structural defects in the azurite crystals, transforms into malachite. The malachite formation takes place radially, which can also be seen from the pseudomorphoses.

Perimorphoses are crust-like growths around larger crystals. They are also known as envelope pseudomorphs. For example, small quartz crystals can form around a large fluorite crystal. This is then called perimorphism from quartz to fluorite. It is irrelevant here whether the fluorite crystal is completely or partially preserved or has been completely dissolved away. It can also happen that the cavity of a detached crystal is filled up again by another substance and the crust is later detached again. This pseudomorphism is then referred to as the fill-in pseudomorphism . This makes it clear that the formation of pseudomorphoses as a highly complicated process is often puzzling and the history of the origins of some pseudomorphoses cannot be clearly determined scientifically.