This article describes the poison. For the medical-ethnological journal, see Curare (journal) . 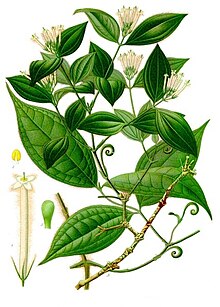 Curare is a collective name for various alkaloid-containing substances from nuke nut species and moonseed plants that are used by the indigenous population of South America as arrow poison for hunting. Curare is made from thickened extracts of bark and leaves from various South American liana species , whereby the recipes of the individual ethnic groups are different. Depending on how the poisons are stored, they are divided into tubo curare, pot curare and calebasse curare.

Tubocurare is obtained from the bark of the species Chondrodendron tomentosum and various other species of the moon seed family (Menispermaceae). This form of curare is mainly produced by the indigenous people of Guyana and the upper Amazon basin. The term tubocurare or tube curare is derived from the storage of liquid curare in bamboo tubes (Spanish : tubo ). The main component is the bisbenzylisoquinoline alkaloid tubocurarine , which was also used in anesthesia in the past , but is now obsolete due to the availability of newer substances with more favorable action profiles.

Calebassen curare - occasionally also spelled calabash curare - is obtained primarily from species of the nuke ( Strychnos ) genus , in particular Strychnos toxifera . It is kept in small, hollowed-out bottle-shaped pumpkins ( calabaza in Spanish ). Compared to the pot and tubocurare, the calabash curare is considered to be highly toxic.

It contains various strychnose alkaloids . The main alkaloid is toxiferin I, which is used as a muscle relaxant in medical operations. It also contains 40 other alkaloids. Further representatives are, for example, C- dihydrotoxiferin , C- curarin I and C- calebassin .

Pot and tubocurare are similar to each other and are less toxic. Pot curare is typical of the Indians of the Orinoco Basin . According to its name, the poison is stored in small clay pots. The main representatives are tubocurarine and curarin .

Curare is a competitive antagonist of nicotinic acetylcholine receptors . It acts as an antagonist of acetylcholine : it occupies the binding sites on the acetylcholine receptor without activating this receptor. Activation by the actual agonist of the receptor, acetylcholine itself, can no longer take place. Acetylcholine is the neurotransmitter at the neuromuscular endplate , the synapse between motor nerves and skeletal muscles . That is why curare causes flaccid muscle paralysis. In the end, respiratory failure leads to death due to paralysis of the respiratory muscles. The central nervous system remains largely intact, and the heart muscle is not affected either. To treat the neuromuscular block, the patient must be adequately ventilated until the toxicity subsides. Alternatively, a cholinesterase inhibitor ( pyridostigmine , neostigmine ) can be used to increase the acetylcholine level and thus displace the curare from the motor endplate.

Curare is lethal when absorbed through the bloodstream, but not through the digestive tract. The consumption of the prey shot with the arrow poison is therefore harmless.

In anesthesia , tubocurarine hydrochloride was used as a stabilizing (not depolarizing ) muscle relaxant . This is the fourth component of anesthesia after hypnosis , analgesia and amnesia . Tubocurarine also causes histamine release with constriction of the bronchi and a drop in blood pressure. Because of these very unfavorable side effects, successor substances such as mivacurium (short half-life ), pancuronium (long half-life), vecuronium (medium half-life), cisatracurium , alcuronium chloride or rocuronium are used instead in modern anesthesia as non-depolarizing muscle relaxants , which have a more favorable profile. However, their mechanism of action is basically the same. The use of small doses of non-depolarizing relaxants before the administration of depolarizing relaxants (currently only succinylcholine clinically ) is called precurarization, a process that has now largely been replaced by “priming” and “timing”. The aim is to avoid fasciculations caused by the depolarization of the muscle fibers.

Curare is similar in its effect to the coniin of the spotted hemlock . Other acetylcholine receptor blockers are the nicotine of tobacco , anatoxin-a some cyanobacteria , cytisine of laburnum , Epibatidin of poison dart frog and arecoline of betel nuts . In contrast to curare, these toxins function primarily as an activator on the nicotinic acetylcholine receptor , so they lead to a stimulus and can thus cause cramps before a physiologically-related inactivation of the receptor (and thus a receptor blockade) follows and the curare-like, muscle-relaxing effect occurs.

Discovery of the poison by the Europeans

Already the conquistadors described the deadly poison arrows of the South American inhabitants, whose poison paralyzed the muscle system of the victim within a short time. The Dominican Gaspar de Carvajal described how two Spanish mercenaries were hit by poison arrows and died in agony on an expedition on the Amazon that started in Quito in 1541 in search of the legendary Eldorado . By 1516 at the latest, the Italian chronicler Pietro Martire d'Anghiera, reporting on the discovery of the New World , had mentioned arrows equipped with scorpion spines, but also an arrow poison made from certain tree saps, which could have been curare. The traditional hunting poison is not harmful when consumed, as it only enters people's blood in negligible amounts via the gastrointestinal tract and thus cannot have any toxic effects. Its use was widespread in South America, with the recipe and preparation method differing according to region and ethnic group.

Curare was first described by the French chemist and geographer Charles Marie de La Condamine . La Condamine took part in an expedition to the equator that started on May 16, 1735. The aim of the expedition was actually meridian measurements . However, La Condamine also gathered information about the raw materials of the countries crossed and the customs of the people living there. Among other things, poisoned arrows came into his possession. He wrote of the substance used by the Ticunas :

“This poison is an extract that is made from the sap of various plants, especially certain lianas. It is assured that the poison used by the Ticunas contains more than 30 types of herbs or roots. It is the most valued among the various species known along the Amazon. The Indians always make it in the same way, following exactly the recipe that has been handed down to them by their ancestors ... "

In his travel report from the Esmeralda station on the Orinoco , Alexander von Humboldt described in detail how the cura poison was obtained by an Indian from the freshly collected Mavacure plant using the processes of evaporation and filtration . Humboldt and his companion Aimé Bonpland were asked to taste the juice and to convince themselves of the bitterness of the substance. The French ethnologist Claude Lévi-Strauss described the preparation of the poison in the Brazilian Nambikwara in his travelogue Sad Tropics :

“They prepare curare for their arrows by making a brew from the red skin of certain strychnos roots, which they allow to evaporate over the fire until the mixture has a doughy consistency; [...] "

A precise description of the use by the indigenous people of the Brazilian jungle also comes from Lévi-Strauss:

"The men hunt with large bows made of palm wood and arrows, of which there are several types: the ones intended for bird hunting have a blunt point so that they do not get stuck in the branches: the arrows for fishing are longer, have no feathering and end in three to five diverging tips; Finally, the poisoned arrows, whose tip dipped in curare is protected by a bamboo container, are reserved for medium-sized game, while those for large game - jaguar or tapir - have a lance-shaped tip made of a large piece of bamboo and cause bleeding because the arrows The poisonous dose of a single arrow would not be enough to kill the animal [...] "

One of the first to experiment with curare in Europe was the French scientist Claude Bernard . In experiments with frogs , Bernard showed in 1856 that the poison blocks the transmission of impulses to neuromuscular synapses. This means that the muscle is not stimulated. The cancellation of the curare effect by physostigmine was discovered around 1900 by the Viennese doctor Jakob Pál . D-tubocurarine, an alkaloid of the moon seed family , was used for medical purposes and was used to immobilize the muscles of the internal organs.