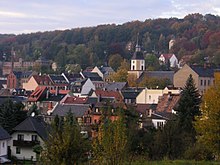 The large district town of Hohenstein-Ernstthal is in the east of the district of Zwickau . The city is particularly known as the birthplace of the writer Karl May and for the Sachsenring , where the German motorcycle world championship is held.

The former district town of Glauchau is approx. 15 km west and the city of Chemnitz approx. 20 km east of the city. Hohenstein-Ernstthal lies on the transition from the northern edge of the Ore Mountains Basin and the southern edge of the central Saxon loess loam hill country , which reaches here in the heights of the Pfaffenberg ( 479  m above sea  level ). Since a large part of the city center is on the south side of the Pfaffenberg, you can see large parts of the Ore Mountains from here . To the north of the city are the Oberwald reservoir and the Oberwald serpentinite quarry . They belong to the “Pfaffenberg – Oberwald” nature reserve. The Goldbach rises in the Ernstthal district and drains over the Lungwitzbach into the Zwickauer Mulde . The highest point of desert fire is Heidelberg ( 450  m above sea  level ) with its observation tower.

Under the Schönburg counts Ernst I (1480–89) and Ernst II († 1534) both urbanism and mining were promoted; the mining towns of Hohenstein , Scheibenberg and Oberwiesenthal are their founding. Hohenstein was created after silver ore was discovered here in the 15th century . According to legend, the first settlers should have shouted "uff dem hoch Stein" when they saw what is now Pfaffenberg for the first time. Hohenstein was founded in 1510. Hohenstein belonged to the Schönburg rule of Glauchau. In the 16th century, the residents of Hohenstein were exempt from forced labor. In 1616 there was no court of its own in Hohenstein, the Glauchau office apparently allows court to be held here if necessary or court days.

After linen weaving and bleaching, and later also stocking knitting, spread in Hohenstein and the surrounding area in the first half of the 16th century, from the 17th century onwards it was not mining that dominated, but weaving. The textile industry as in many places of the region's most important source of income.

The famous writer Karl May was born in Ernstthal on February 25, 1842 . In 1880 he married his wife Emma Pollmer in the Hohenstein Church of St. Christophori. Numerous memorial plaques and the Karl May House in the house where he was born remind of Karl May's work in Hohenstein and Ernstthal .

With the opening of the Chemnitz - Zwickau section of the Dresden – Werdau railway line, Hohenstein-Ernstthal station was opened to traffic on November 15, 1858 . Initially, however, the station belonged neither to Hohenstein nor to Ernstthal, but to Oberlungwitz Abbey . The station property was later bought by the city of Hohenstein.

After an administrative reform was carried out in the area of ​​the Schönburg recession in 1878, Hohenstein and Ernstthal came to the newly founded Saxon authorities in Glauchau in 1880 .

At the beginning of 1898 the two cities merged to form today's Hohenstein-Ernstthal. The Hohenstein town hall now became the administrative building of the new city, which also received a new city coat of arms.

After in 1910 in the “St. Lampertus ”was the last shift, the mining era in Hohenstein ended. Except for the Huthaus built in 1846, all buildings were demolished. The hut has been used as a club house since 1998 by the "Freundeskreis Geologie und Bergbau Hohenstein-Ernstthal eV", founded in 1996.

In 1911, the Erzgebirgsverein built the mountain inn on the Pfaffenberg . The first mountain festival also took place this year.

In 1927, the Badberg Viereckrennen was held for the first time on the old route of the Sachsenring race track . The 8.71 km long road course ran counterclockwise through Hohenstein-Ernstthal to the north, and then in a westerly direction parallel to today's A4 Chemnitz - Gera . On today's federal highway 180 , it went south, then merged into the home straight in the Queckenberg curve. The autobahn north of Hohenstein-Ernstthal, now known as the A4, was built in 1937.

During the Second World War from December 10, 1944 to mid-April 1945, a satellite camp of the Flossenbürg concentration camp was set up in the village , in which 444 concentration camp prisoners had to do forced labor in the local armaments industry and in neighboring Siegmar-Schönau . There were also prisoners of war and forced laborers from the countries occupied by Germany.

In the years after the fall of the Wall , the city had to struggle with high levels of emigration due to structural change . In recent years the city has benefited from major developments in the automotive and mechanical engineering industries. This has improved the economic situation. Due to the loss of the district seat in 1994, the city of Hohenstein-Ernstthal was awarded the title of Large District Town . She came to the Chemnitzer Land district in 1994 , which was added to the Zwickau district in 2008. In 1995 the new Sachsenring circuit was put into operation.

On January 1, 1999, Wüstenbrand and parts of Oberlungwitz (with 92 inhabitants) and St. Egidien (with 47 inhabitants from Kuhschnappel ( Waldenburger Oberwald )) were incorporated. In the week of June 4 to 12, 2005, the Ernstthal district celebrated its 325th anniversary. The highlight of the festival week was an 810 meter long parade on June 12th. On August 8, 2012 there were talks between Hohenstein-Ernstthal and Callenberg about a cooperation. The then Hohenstein-Ernstthal mayor Erich Homilius made specific suggestions about a possible merging of the two places.

In today's town hall of Hohenstein-Ernstthal were the villages of Kirchberg and Gecksdorf, which fell desolate in the Middle Ages . They were probably given up in the 15th century or before, because in 1493 a Schoenburg inheritance book of the Glauchau rule names numerous desolate estates on the Hohenstein . Presumably Gecksdorf and Kirchberg were meant. It is unclear whether it was a question of rural settlements or mining settlements. Probably the former.

On October 3rd, 1990 Hohenstein-Ernstthal had 18,790 inhabitants. The following population figures refer to December 31 of the previous year:

Source: State Statistical Office of the Free State of Saxony

Since the election on May 26, 2019, the 22 seats in the city council have been distributed among the individual parties and groups of voters as follows:

Since the election on May 26, 2019, the 8 seats in the local council have been distributed among the individual parties and groups of voters as follows:

At the election of the Lord Mayor on September 1, 2019, Lars Kluge was confirmed in office with 63.8% of the votes.

Blazon : " Square , in one in gold one made of a blue wave shield foot, in it two silver wave threads, growing a left-turned silver-imitated man in natural colors, gold-belted blue robe with red cloak, with his right hand on a green stick in natural colors, on which On the left shoulder the natural-colored, silver-embellished Christ Child with a silver orb in his left hand, a green fir tree in red between two receding silver stepped rocks, in three in black a golden mallet and iron and in four in silver two bars growing out of the field edge, crossed , red-sleeved hands in natural colors, everything covered with a label, divided three times diagonally by red and silver. "

The city of Hohenstein-Ernstthal uses the colors red and silver as the flag. Other versions of the coat of arms show a looking saint, e.g. Partly with a golden nimbus, the sleeve color black.

The city coat of arms was created after the unification of the two cities of Hohenstein and Ernstthal around 1898. The diminished man is St. Christopher and refers to the Lutheran Church of St. Christopheri, the "mallet and iron" is to be seen as a symbol of the former mining industry, the fir tree reminds of the former forest on the Ernstthaler corridors and the interlocking hands symbolize the Cohesion of the Ernstthal citizens, both of the latter from the former Ernstthal coat of arms. The lords of Schönburg were the former feudal landlords of both places, whose coat of arms is shown in the heart shield.

Sister cities of Hohenstein-Ernstthal are

The city of Dugny ( France ) was a twin town of the former district town of Hohenstein-Ernstthal in the GDR times from 1969.

The city has the following water features:

View over the town hall tower

Through the urban area which leads A 4 . This can be reached via the Hohenstein-Ernstthal and Wüstenbrand junctions . The B 173 and B 180 also pass nearby. 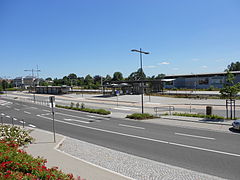 The Hohenstein-Ernstthal station is located on Dresden-Werdau railway in Transport Association Central Saxony . Both the hourly regional express trains on the RE3 Dresden – Freiberg – Chemnitz – Zwickau – Plauen – Hof line and the regional trains on the RB30 Dresden – Freiberg – Chemnitz – Zwickau line stop at all en-route stations, the hourly intervals of which are sometimes reduced to half an hour . The commissioning of the Central Saxony electrical network in June 2016 went hand in hand with improvements in the timetable and the use of new, affiliated Alstom Coradia Continental railcars . Since then, the operator has been the Mitteldeutsche Regiobahn .

The regional express RE1 Chemnitz - Erfurt - Göttingen stopped until December 2011 and has since ended in Glauchau. A withdrawal of the reduction depends on whether the Free State of Saxony will in future pass on the regionalization funds from the federal government in full to the special-purpose associations responsible for ordering local transport . Until 2012 the station was also the stop of the private long-distance line Vogtland-Express Plauen-Chemnitz-Berlin.

There are two city ​​bus lines in the city , line 1 serves the area from the train station / bus station in the direction of Hüttengrund, Sonnenstraße and Wüstenbrand. And line 2 serves the E-Thälmann-Siedlung and F-Heckert-Siedlung area. There are still a large number of overland lines in the direction of Lichtenstein, Oberlungwitz, Limbach-Oberfrohna, Lugau, Langenchursdorf, Oelsnitz, Waldenburg and Chemnitz. From 1913 to 1960 the station forecourt in Hohenstein-Ernstthal was the starting point for an intercity tram, the Hohenstein-Ernstthal-Oelsnitz tram .

Hohenstein-Ernstthal is located on the southern slope of the Paffenberg, which is 480 m high. In good weather conditions, the view of the highest mountain in Saxony, the Fichtelberg, is tremendous. The large area offers a variety of opportunities for walkers and hikers. In the center of the area is the mountain inn, which is unfortunately currently closed.

There is also a dendrological nature trail, a large variety of rhododendrons, and an open-air stage with seating for concerts or events in the area. The Pfaffenberg also offers two playgrounds for children.

The Rosa-Luxemburg-Park, located in the Hohenstein district, offers a small park for strollers and a playground for children of all ages.

The Heidelberg Tower is at the center of the Heidelberg green space in Wüstenbrand . This is a lookout tower, which was built in 1991 on the highest point of the place.

→ Main article : List of personalities from the city of Hohenstein-Ernstthal