Lichtenstein lies between Chemnitz approx. 29 km east and Zwickau approx. 12 km west. Lichtenstein lies north of the Western Ore Mountains at an altitude of 288 to 428 m above sea level. NN.

In addition to the actual urban area, the following districts belong to Lichtenstein: 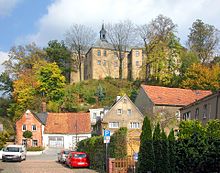 In 1212 a "castrum Lichtenstein" is mentioned for the first time in a document from King Friedrich II . The first reliable mention of the castle of Lichtenstein occurs in 1286. In 1261 the church of St. Laurentius is mentioned for the first time. The city is closely connected with the aristocratic Schönburg family. They founded Lichtenstein at the end of the 12th century, built the castle and resided here until they were expropriated in 1945. In a document from 1446, Lichtenstein is first referred to as a city. In 1627 the building of today's Ratskeller was converted into a town hall.

During the Thirty Years War , Lichtenstein was looted and burned down by imperial troops in 1632 . Seven years later, the castle was destroyed by the Swedish army and the city was plundered.

After the Thirty Years War

The Callnberg district was founded in 1708, but was only given the name Callenberg in 1712. In 1725 he received city rights. The Luther Church in the new city was built in 1770. In 1771 a city fire broke out and it took ten years to start the reconstruction of the Laurentiuskirche, which was completed in 1786. The previous Gothic building was from the 13th century, the new church received its current Jehmlich organ in 1902 . In 1771 and 1772 there was a flood disaster and a famine, as a result of which 787 people died in both cities. In 1843 the official building was built in the Schloßallee, today's Palais. The post office was built in 1859. There was another fire in the town in 1869. In the years 1877 to 1879 the Stollberg – St. Egidien , where Callnberg also has a stop. As a result of industrialization, Lichtenstein was known for its textile industry , hosiery, tricot days (underwear) and upholstery fabrics, the new district of Grünthal was founded in 1880, in which the community school was inaugurated in 1899, later the Diesterweg School. The Pestalozzi School was built in 1906 and 1907. In 1920 the cities of Lichtenstein and Callnberg united. The double name Lichtenstein-Callnberg was used by the city until April 1, 1938. Lichtenstein was initially occupied by the US Army at the end of April 1945 and then handed over to the Soviet occupiers in the summer .

With the territorial reform in the GDR on July 25, 1952, Lichtenstein was incorporated into the newly founded Hohenstein-Ernstthal district in the Karl-Marx-Stadt district, before it belonged to the Glauchau administration . From 1956, two prefabricated building areas were built west of the train station , on the one hand the so-called Protzdorf, in which the Otto Grotewohl School, today's Heinrich von Kleist School, was opened in 1966 , and the Ernst Schneller settlement in the 1980s .

Shortly after the political change in 1991, the foundation stone for the Am Auersberg industrial park was laid, and the Auersberg Center opened in October 2004. After the end of the GDR , Lichtenstein tried to revive tourism. In 1996 it hosted the first Saxon state horticultural show . In addition, the Mini World was opened next to the city museum in 1999, followed two years later by the Daetz Center . From 1997 to 2000 the new hospital building was built in the south of the city. In 2000, the Diocese of Dresden-Meißen sold Lichtenstein Castle, which previously housed an old people's home and the Holy Mass was held, to Prince Alexander von Schönburg-Hartenstein , and the building has been falling into disrepair ever since. The Diesterweg School was closed in 2002 and two years later the Lichtenstein Vocational School Center for Economics and Social Affairs moved into the building . In August 2003, the bypass of the B 173 was opened. 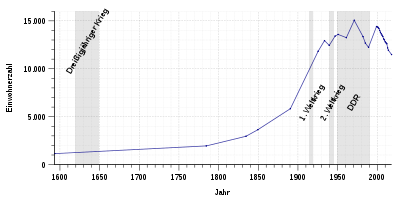 Population development of Lichtenstein according to the adjacent table. Above from 1593 to 2017. Below an excerpt from 1871

Data source from 1998: State Statistical Office of the Free State of Saxony

Lichtenstein and the surrounding area as a 360 ° panorama

Lichtenstein's city council consists of 22 city councilors and the mayor. The local elections on May 26, 2019 led to the following result with a turnout of 61.6%:

+/- change compared to the previous municipal election in 2014 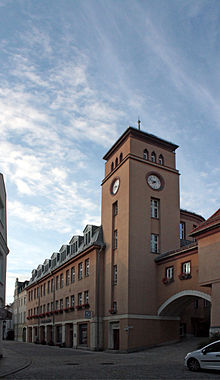 List of names of the mayors of Lichtenstein, as far as they are known.

Thomas Nordheim (Free Voters) has been Mayor of Lichtenstein since August 1, 2015. He was elected in the mayoral election on June 7, 2015 with 66.3% of the valid votes and a voter turnout of 56.2% in the first ballot. His predecessor did not run for election after 25 years and Nordheim prevailed against his competitor Dagmar Hamann (CDU).

List of names of the city ​​judges and mayors of Callnberg, as far as they are known.

With the city union of Lichtenstein and Callnberg in 1920, the city coats of arms of both cities merged.

The old Lichtenstein coat of arms shows a gate tower in silver on a red background. The portcullis in the upper part of the archway is gold-plated. On the archway there is a tower tower that widens towards the top and consists of two floors. A dome with a gold-plated tip forms the end, flanked by two corner turrets, the tips of which are also gold-plated. On both sides of the tower there is a rose with a green stem and silver petals. The age of the coat of arms can no longer be determined precisely. As early as the middle of the 15th century, official documents bore a seal stamp with the described coat of arms.

The coat of arms of the city of Callnberg was the house coat of arms of Count Otto Wilhelm von Schönburg. He gave it to the place with the granting of town charter in 1725. The coat of arms has two strong red stripes on a silver background, leading down to the right. The spangenhelm with the corresponding count's crown is located above the shield. The decorative feathers on the helmet are also made of silver and red.

In Lichtenstein there is a DRK hospital, a standard care hospital with 155 beds. In 1440 the first hospice was built in Lichtenstein, and in 1888 the first building took place on today's hospital grounds. The hospital cooperates closely with the DRK hospital in Chemnitz-Rabenstein , so both houses have a joint managing director. The DRK Gemeinnützige Krankenhaus GmbH Sachsen has been the sponsor since 2004; the City of Lichtenstein holds 10% of the shares in the hospital. The chief physician of the surgical-gynecological department of the Lichtenstein-Callnberg District Hospital was F. Otto Mayer, who also contributed to the anesthesia and local anesthesia.

Lichtenstein has a vocational school center for economics and social affairs, 2 elementary schools, 1 high school with secondary and secondary school as well as the high school Prof. Dr. Max Schneider .

After the construction of a bypass, the B 173 now passes the city. The city can be reached via 3 different runs. It can also be reached via the A 4 connection Glauchau-Ost (approx. 14 km) or Hohenstein-Ernstthal (approx. 10 km) running to the north and the A72 connection Hartenstein running south .