The federal autobahn 72 (abbreviation: BAB 72 ) - short form: autobahn 72 (abbreviation: A 72 ) -, also known as the Vogtland autobahn , runs from the A9 at the Bavarian Vogtland triangle near Hof, initially as European route 441 heading east to the Chemnitz junction with the A4 and further north to almost the A 38 at the future Leipzig-Süd motorway junction . The 7.2 km long end gap, which will still exist in 2020, starting at the Espenhain Nord junction, is expected to be under construction until 2026.

The route, also known as the Vogtlandautobahn , was started in the 1930s as a corner connection between the north-south route Berlin – Munich and the east-west route Dresden – Bad Hersfeld to connect Silesia and East Saxony with Bavaria. Because of the high level of industrialization in southern Saxony and the beauty of the landscape, the route from Chemnitz to Hof was considered important by the Inspector General for German Roads, Fritz Todt . The first section between the Pirk and Treuen junctions was released for construction in the summer of 1934, the section from Zwickau-West to the Chemnitz motorway triangle in March 1935, that from Treuen to Zwickau-West in the autumn and finally the last section from the Bavarian motorway triangle in March 1936 Vogtland to the Pirk junction. The topography of the motorway running parallel to the Ore Mountains necessitated the construction of seven large valley bridges, five of which were planned in stone as vaulted bridges . In the eastern part, the route crossed mainly agricultural areas and, in some cases, cities with dense buildings. The western section was mainly led through forests, with the highest point being reached at the border between Saxony and Bavaria at 576.40 meters above sea ​​level . In the summer of 1935, work began on the 15.8-kilometer section from Pirk to the Triebal Bridge. During the construction work, on September 5, 1935, the instruction came to make the subgrade of the motorway with a crown width of 24 meters, until then 15 meters had been planned. However, only a 7.5 meter wide directional carriageway had to be completed , which could be driven on with one lane in both directions. In 1936, construction work began between the Trieb valley bridge and Zwickau-West. On June 3, 1938, the Hof lane between the Pirk and Treuen junctions was put into operation, and on December 4, the extension to Zwickau-West.

In 1937, work began on the section between the Stollberg junction and the Chemnitz autobahn triangle, which was put into operation on August 15, 1939, for the most part with a single lane. Between Chemnitz-Süd and the Autobahn triangle, the section already had both lanes.

Between July 1938 and January 1939, work began on the gap between Zwickau-West and Stollberg with the valley bridges at Culitzsch and Wilkau-Haßlau. In addition, a briefly expanded cross-section with a 2.25 meter wide edge strip was implemented. Commissioning between Hartenstein and Stollberg followed in April 1940, and between Zwickau-West and Hartenstein in July 1940. Construction work also started on the western section between the Bavarian Vogtland and Pirk motorway triangle with the two large bridges over the Saale and the Weisse Elster .

The last traffic opening before the end of the Second World War followed in September 1940 between Heroldsgrün and Hof / Töpen. When construction work was stopped in May 1942, 94% of the 107.5 kilometers of motorway were in operation, 93% of which only allowed one-way traffic. The costs up to then amounted to 7.0 million Reichsmarks. The 4.3 kilometer section between Kleinzöbern and Pirk with the Elstertal bridge and the 1.9 kilometer section between the Bavarian Vogtland and Heroldsgrün motorway triangle were still missing. Originally, the first section of the motorway up to the “ Chemnitz junction ” was supposed to be completed in the 1940s.

Because the Rudolphstein bridge on the Munich-Berlin autobahn was blown up in 1945, today's A 72 autobahn was used as an interzonal crossing between 1945 and 1951, but the crossing was shut down in 1951 and traffic was via Bundesstraße 2 - Töpen-Juchhöh border crossing - until the Saale valley viaduct was rebuilt in 1966 . directed. The motorway triangle was only completed on June 24, 1963 in the direction of Nuremberg – Chemnitz and on October 1, 1966 in the opposite direction. In the 1960s, the section from Chemnitz- South to Zwickau- East was expanded to two lanes.

From 1951 to 1989 the motorway between Hof / Töpen and Pirk was closed to traffic. At least in the 1980s, the section between the Großzöbern temporary exit and the Heinersgrün exit (which was not released during the later expansion) was accessible on two lanes within the restricted border area.

From 1990 to 1995 the motorway between the Bavarian Vogtland and Zwickau motorway triangle was completed or renewed for around DM 1 billion. Until then, the single-lane route was considered a “death runway”, in accidents 55 people died here before it was completed. For completion, many underpasses and overpasses had to be renewed. At the end of 1992, the 4.4-kilometer section between Plauen-Ost and Plauen-Süd was expanded to four lanes. After the completion of the north side of the Elstertal Bridge, the 4.2 kilometer long gap between the Pirk junction and the Kleinzöbern temporary junction was closed on October 2, 1992 and opened for two-lane traffic. In addition, the second carriageway on the sections from Plauen-Süd to Pirk and from Kleinzöbern to the Bavarian Vogtland motorway triangle was put into operation. The construction work for the 500-meter-long and 60-meter-high Elstertal Bridge near Pirk began in 1937. On September 6, 1993, the Elstertal Bridge was finally completed and usable on four lanes. In the same year the second carriageway was opened to traffic in the section between Wilkau-Haßlau and the Reichenbach junction, followed a year later by the section to Plauen-Ost, so that at the end of 1994 the second carriageway was continuously passable. After a major overhaul of the first lane, two lanes in each direction were available on the entire route from autumn 1995. Among other things, the Wilkau-Haßlau viaduct and the Culitzsch viaduct were renewed, and the stone arch bridges over the Saale valley, the Göltzschtal valley and the Pöhl reservoir were provided with prestressed concrete superstructures . From 2002 to 2008, the approximately 30-kilometer section from the Chemnitz motorway junction to the Zwickau-West junction was expanded. The route between the motorway junction and Chemnitz-Süd was extended to six lanes and the rest to the four-lane standard cross - section with a width of 29.5 meters. The new Chemnitz Rottluff / Rabenstein connection was opened on July 14, 2009. 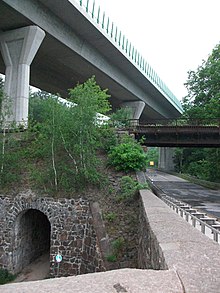 Bridges in three levels near Penig (2016)

Due to the high frequency of the federal highway 95 between Chemnitz and Leipzig, a motorway connection between the cities was planned as an extension of the federal motorway 72. The total costs of the 62-kilometer route should be around 470 million euros. Of this, 76.5 million euros will be co-financed by the European Regional Development Fund (ERDF) in the funding period 2007 to 2013 for the third construction phase .

The extension of the A 72 to Leipzig is to run via Röhrsdorf , Hartmannsdorf , Niederfrohna , Penig , Geithain and Borna to the south of Leipzig to connect to the Leipzig-Süd motorway junction with the A 38 . Construction began on November 21, 2003.

This connection had already been applied for under the designation “A 83” by the Free State of Saxony for the Federal Transport Infrastructure Plan 1992 / requirement plan for federal trunk roads . According to the original plans, the section to Borna should be completed for the 2006 World Cup. However, at the end of 2006 only the section from Kreuz Chemnitz to Niederfrohna was open to traffic. In addition, the motorway was to continue north of the A 38 along the current B 2 to the future Mittlerer Ring in Leipzig.

As a result of the extension, the course from west to east has changed into a course from south to north. This means that numbering with an even ordinal number no longer corresponds to the rule for German motorways .

The extension from Chemnitz to Leipzig is divided into eight sections, which are numbered in ascending order from south to north (1.1 to 5.2) and were also put into operation or are being built in this order as a motorway. Planning section 1 extends from the Chemnitz motorway junction to the Niederfrohna junction.

On November 21, 2003, construction began on section 1.1. On February 23, 2005, the Federal Administrative Court in Leipzig dismissed claims against the expansion of the Chemnitz motorway triangle into a motorway junction. Construction of section 1.2 began on March 29, 2005. In the Röhrsdorf district of Chemnitz, a 301 m long bridge was built over the Pleißenbachtal. The construction of another bridge (195 m long and 9.25 m high) on the corridor between Niederfrohna and Mühlau over the Mühlbachgrund began on July 25, 2005. It spans two protected areas with an area of ​​6000 m². The locations of the bridge piers on this section had to be optimized from an ecological point of view, which is why, for example, the directional lanes have a greater distance with an approximately 1.30 m wide light gap, which improves the tanning of the biotope areas below.

On November 14th 2006 the inauguration of the first section followed with the section from Kreuz Chemnitz to Hartmannsdorf, on December 21st 2006 the following section to Niederfrohna was opened. The future A 72 / A 38 motorway junction was completed in May 2006 (today's Leipzig-Süd AS of the A 38).

BW 20, bridge over the Mulde

Bridge over the Ratte (BW 25) near Rathendorf

With the resolution of the Chemnitz Regional Council on May 16, 2007, the second construction phase was approved . The section begins at the completed Niederfrohna junction and continues to the connection to the B 175 ( Rochlitz junction ) between Rathendorf and Obergräfenhain. The official start of construction was on December 18, 2007. The two large bridges BW 20 over the Zwickauer Mulde and BW 18 over the Lochmühlental had been completed by autumn 2011. The release followed on December 22, 2011.

Bridge over the Zedtlitzer Grund

The planning approval decision for section 3.1 from Rathendorf to Frohburg was signed on February 20, 2008. The official start of construction was on June 5, 2009. The section begins at the Rochlitz junction on the B 175 and provisionally ended north of Frohburg.

With the decision of the regional directorate in Leipzig on April 28, 2009, construction phase 3.2 was approved. It begins at the provisional end of section 3.1 north of Frohburg and connects to the completed construction section 4. The official start of construction was on March 6, 2010. According to the judgment of the Federal Administrative Court in Leipzig of February 24, 2010, a supplementary planning approval had to be carried out for the Frohburg junction, the S 11 network supplement and the B 95 / S 11 junction. The construction of the motorway without the junction was possible. At the end of 2019, an application was made to carry out the plan approval procedure.

Section 3 was opened to traffic on August 9, 2013. The cost of this 20.5-kilometer section between Rochlitz and Borna-Süd amounted to 200 million euros.

In September 2006 the section Borna-Süd - Borna-Nord was completed, but this was still dedicated as federal road 95 until August 9, 2013 . On January 17, 2012, the Leipzig Regional Office issued the planning approval decision for additional noise protection measures that were implemented between September 2012 and May 2013.

On August 9, 2013, the section was upgraded to the motorway and put into operation together with section 3.

The planning for this section has been running since November 2004.

The section A 38 – Leipzig should go into operation by 2020. The Saxony Autobahn Office prepared the technical planning, which was passed on to the Federal Ministry of Transport at the end of 2008. This section was previously planned as the federal autobahn 720 and then designated as a section of the A 72. The completion of this section was included in the Federal Transport Infrastructure Plan 2003 . On December 11, 2012, the top administration and in February 2013 the City Council of Leipzig spoke out against the expansion of Bundesstraße 2 into a motorway. The Saxon Transport Minister Sven Morlok then announced that the Free State would no longer register the continuation of the section for the Federal Transport Infrastructure Plan 2030 . In addition, the Free State will now also present the federal government with an expansion variant of the B 2, in which the Agra Bridge, which is in need of renovation, will be replaced by a tunnel.

Wikinews: A 72: Section Niederfrohna and Rathendorf opened to traffic  - message