The federal motorway 93 (abbreviation: BAB 93 ) - short form: Autobahn 93 (abbreviation: A 93 ) - is 268 km long and leads from Hof to Holledau and further south from Rosenheim to Kiefersfelden on the German - Austrian border.

In the greater Regensburg area , the four-lane route of the B 16, the so-called "western bypass", was upgraded to a motorway. The motorway cuts through residential areas here. The high density of exits is due to historical reasons: As a rule, the motorway does not have a hard shoulder, but a continuous acceleration or deceleration lane from one entrance to the next exit. At the Regensburg motorway junction, there are no distribution strips on the A 93 side.

Between the AS Regensburg-West and Regensburg -prüfunging, the A 93 was provided with a housing for noise protection reasons . The top of the lid is used as a park-and-ride facility.

The Pfaffensteiner Autobahn bridge is one of only three Danube bridges in the city that can be used without restrictions. This is why this section of the A 93 is also often used for inner-city traffic.

The section between Rosenheim and Kiefersfelden is also of great importance, as it represents the beginning of the most important north-south route over the Alps and this route continues through the Inntal and Tyrol to Innsbruck ( Inntal motorway A 12) and beyond the Brenner Pass in the direction of Verona in Italy (Austrian A 13 / Italian A22 Brenner motorway ). That is why there is usually a lot of traffic on this section of the A 93 between the A 8 and the German-Austrian border. Traffic jams often occur, especially at peak times (especially the beginning and end of holidays).

Especially since the EU's eastward expansion , heavy goods traffic on this route has increased significantly, which has placed a heavy burden on the flow of traffic and the road surface. The introduction of the truck toll has not resulted in any significant reduction in traffic. For these reasons, the surface was replaced a few years ago in order to be able to withstand the increased demands. Furthermore, different but still bans affect (weekends, holidays, vacation) in Tyrol and Italy the transport of goods , which then comes almost entirely on this line to a halt. One effect of this is the large number of truck stops and parking spaces in the south of Munich when such a driving ban occurs.

The construction history of this motorway stretched over two generations. Work on this motorway began as early as 1936. In 1940, before the war-related closure, the 23-kilometer section between the Holledau and Elsendorf motorway triangle was largely completed. From 1958 this section was at least one-lane, from the beginning of the eighties two-lane. In 1986 the Holledau- Regensburg section was completely finished.

The completion of the northern section up to the Hochfranken triangle took much longer. The first section between Nabburg and Pfreimd was opened in the late 1960s. From there, the autobahn was lengthened piece by piece towards the south to Regensburg. Completion was delayed due to numerous objections and only received political priority with a fatal accident with a tanker on the parallel B15. It was not until the opening of the section at Regenstauf in 1982 that it ran continuously from Regensburg to Pfreimd, and in 1987 to Weiden . The gap at Hof was only closed after reunification and the resulting increased traffic around the city on December 20, 2000. The Hof-Ost junction, which is less than 100 m from the Saxon state border, had to go against the original plan it should run on the former border strip, should be turned to the west for ecological reasons. 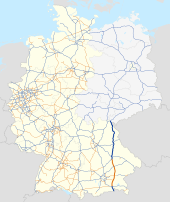 The A 93 was opened to traffic from the Inntaldreieck to Kiefersfelden in 1965 and to the Austrian border in 1968.

According to the original planning, the motorway, coming from the south, should not swivel west to the B 16 at the Pentling service station (see below), but rather lead into the city from the south in the area of ​​today's university. On this route, which was later abandoned, you can still see the remains of prepared structures.

In the sixties the planning of a continuous motorway connection via Landshut (project name: “Federal motorway A 93 Regensburg-Traunstein”) began. In 1972 the government of Lower Bavaria initiated the regional planning procedure. With the abandonment of the original target direction south of Landshut to Traunstein, the procedure was suspended. With a changed route in the direction of Rosenheim ( Inntal motorway triangle ), the regional planning procedure was re-applied for in 1975 (project name: “Federal motorway A 93 Landshut-Rosenheim”). In the course of the 1970s, these plans were abandoned and the A 93 swiveled west to the A 9. To relieve the motorway ring around Munich , the route was transferred to a four-lane, motorway-like federal road 15n , which is open to traffic between Saalhaupt / Schierling and Essenbach and is under construction from Essenbach to BAB 92. A later upgrade of this road to the federal motorway is possible due to the state of development.

In 2015 there were a total of twelve automatic counting points along the A 93. In the north-south direction, the average daily traffic volume during this period was:

The northern part of the A 93 is used by many travelers as a parallel to the A 9 between the motorway triangles Holledau and Hochfranken together with the A 72 to bypass the greater Nuremberg area. Traffic on this route has increased significantly since German reunification. Nevertheless, the traffic density is significantly lower than on the A 9, which is due to the lack of a larger conurbation along the A 93 (such as the Nuremberg area on the A 9) and to appropriately designed signposts at the two triangles.

In the first ministerial draft, this project variant was classified as “no requirement” (KB).