Brannenburg is a municipality in the Upper Bavarian district of Rosenheim .

The community is located on the northern edge of the Alps in the Inn Valley at 509  m above sea level. NN , a few kilometers north of the border between Germany and Austria at the foot of the Hochsalwand and the Riesenkopf . The Wendelsteinbahn runs from Brannenburg to the Wendelstein , one of the most famous mountains in Bavaria . Also known and especially popular with motorcyclists is the toll road Tatzelwurm / Sudelfeldstrasse, which leads past the Tatzelwurm waterfall to Bayrischzell ( German Alpine Road ).

The district Degerndorf dominates the beaver , a nearly 25 m high, about 850 m long and a maximum of about 400 m wide, is towards the north tapered Nagelfluh massif formed during the last ice, the so-called Würm deposited in the river gravel, gravel and sand , pressed and washed out and cemented by calcareous groundwater. The elevation, which is densely forested with beech and pine trees, is only about 65% of its original size due to the fact that the Nagelfluh has been mined since the beginning of the 10th century. Initially, grinding stones and millstones were broken, in the past centuries the Nagelfluh was a coveted building block in the area: Relatively light, frost-proof and pressure-resistant, it forms, for example, the foundation of the Munich Frauenkirche or the base of the oldest high-rise in Munich, the old technical town hall . Numerous farmhouses and houses from Nagelfluh were built in the Inn Valley. In view of the uniqueness of the largest natural monument in Bavaria, including the quarries, about 0.24 km² in area, only limited quarry work is possible today; The three quarries Huber , Feicht and Grad still exist . Since the Nagelfluh has also been mined deep in the past decades, almost 50 m high steep walls rise in the area of ​​the quarries.

The early Baroque pilgrimage church of St.  Maria Magdalena is located on the Biber . It was built from 1626 during the Thirty Years' War by the resident hermit Johannes Schelle (the name Hanns Schell is also passed down). In 1664 it was given the appearance that it largely still has today. The church building is not oriented to the east, as usual, but to the southwest. The associated Way of the Cross was built between 1733 and 1736 and has been preserved in its original state, apart from a few changes. In the middle of the Way of the Cross with 15 stations, which according to the Bavarian State Office for the Preservation of Monuments is unique in idea and execution in Bavaria, reminiscent of Eastern Church piety, there is a representation of the Holy Sepulcher as the XIV station . Most of the rock caves below the church, which the hermits used as prayer rooms, are also largely preserved. Settlement of the beavers has been proven until the early 19th century, when the last hermit died in 1813.

Every year on the Sunday after the name day of St. Magdalena on July 22nd, the Magdalene Festival takes place on the fairground directly below the church .

Brannenburg is first mentioned in a document between 993 and 1000. The name Brannenburg can be traced back to the fact that space for a settlement was made at this point by clearing and burning (the municipal coat of arms still indicates this today). The place belonged as a closed village to the castle and Hofmark Brannenburg. A noble family called von Brannenburg (and similar) died out in the 14th century. In 1818 the political community of Brannenburg was established.

In 1848 the ruling court that had existed until then was dissolved.

At the end of the 18th century and in the first half of the 19th century Brannenburg was home to an important artists' colony, u. a. with the painters Carl Rottmann , Carl Spitzweg , Wilhelm Busch and Karl Caspar .

On August 9, 1851, a Schrofen landslide occurred. A mudslide tore several houses in the Gmain district with it in the following days.

In 1858 Brannenburg was connected to the railway. On August 5, 1858, the Royal Bavarian State Railway opened the Rosenheim-Kufstein section of the Bavarian Maximiliansbahn .

On May 25, 1912, the Wendelsteinbahn , the oldest Bavarian cogwheel railway, began operating. The valley station was initially right next to the Bundesbahn station; In 1961 it was moved back to the Waching district.

In 1935/36 the Karfreit barracks were built in the Degerndorf district (near “Kreuzfeld”) by the Army Construction Administration with builders from Brannenburg-Degerndorf and the surrounding communities. The Brannenburg-Degerndorf garrison housed the 1st battalion of the 100 Mountain Infantry Regiment from 1936; During the Second World War, spare and training units were located here.

After the occupation (1945–1956, US and British troops), the Bundeswehr took over the barracks. The Army Medical School, from which the Bundeswehr Medical Academy emerged, was opened here. More than 1,000 soldiers, mostly mountain pioneers , and around 200 civilian employees were stationed here until 2010. The barracks area was then released by the federal government for conversion for civil purposes.

In Brannenburg, the Roman Catholic Church and the Protestant Church are represented with church buildings and the Jehovah's Witnesses with a Kingdom Hall.

20 voluntary councilors together with the full-time mayor make up the council of Brannenburg.

Description of coat of arms : Divided by three flattened tips of blue and silver; above three vertical golden diamonds floating next to each other, below a horizontally lying stumped branch from which three red flames beat.

The village is on the Rosenheim – Kufstein railway line ( Berlin – Palermo railway axis ) . Brannenburg train station is served hourly by the Meridian in the direction of Munich and Kufstein. The ICE also stops at times . The Wendelsteinbahn , a cogwheel train that used to run from Brannenburg station to the summit of the Wendelstein, also begins in the Griesbach district . The section between the Brannenburg train station and the Waching valley station was abandoned in 1961.

Brannenburg is connected with five or six (Wendelstein-Ringlinie, runs only between May and November) bus routes of the regional transport company Upper Bavaria . Lines 50, 52, 9572, 9573 and 9574 have connections to Raubling , Nussdorf am Inn , Kufstein , Kiefersfelden , Oberaudorf , Flintsbach , Rosenheim , Neubeu and Rohrdorf as well as the Wendelstein ring line to Bayrischzell , Fischbachau and Bad Feilnbach . 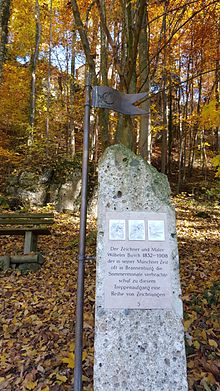 Brannenburg was a lively artist colony well into the 20th century. Numerous personalities such as Christian Mali , Theodor Pixis , Wilhelm Busch , Max Liebermann , Ernst Maria Fischer , Georg Sauter , Karl Caspar , Maria Caspar-Filser , Walter Schnackenberg and the builders Dientzenhofer had their temporary stay or center of their lives in Brannenburg. The new artist colony Brannenburg e. V. (founded in 1999) would like to bring this past closer again and at the same time make people aware that there is still a lot of art in and around Brannenburg. The history of the former artist colony Brannenburg can be conveyed in a guided cultural walk.

Mountain churches are churches on preferred hiking trails, viewpoints or high-altitude, large remote farms in the mountains. Mostly built as branch churches of lower-lying parishes or monasteries, these churches often serve as pilgrimage churches and enable hikers and mountain farmers to attend Sunday services. Many of these churches were looked after by hermits in earlier times.

In Brannenburg there are the mountain churches:

In Brannenburg there is the Ver.di Bildungszentrum Haus Brannenburg as an adult education facility of the Verdi service union with an education program for Bavaria and the whole of Germany.