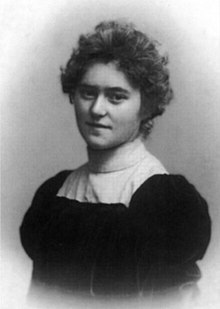 Maria Filser on a photograph from around 1900

Maria Caspar-Filser (born August 7, 1878 in Riedlingen , † February 12, 1968 in Brannenburg ) was a German modern painter . She was one of the founding members of the New Munich Secession and was influenced by Impressionism and Expressionism . During the time of National Socialism , her works were defamed as Degenerate Art and removed from museums. After the end of the war she received several awards.

After studying at the Stuttgart Art Academy and the Munich Art Academy , Maria Filser married the painter Karl Caspar in 1907 ; In 1917 the daughter Felizitas was born. In 1909 she became a member of the Deutscher Künstlerbund , in 1913 she was the only woman to be one of the founding members of the artist group Neue Münchener Secession (see Munich Secession ). In 1925 she was the first German painter to receive the title of professor. She taught at the Academy of Fine Arts in Munich. In 1928 she took part in the Venice Biennale .

She and her husband often spent their summer holidays in Hödingen , where they visited a.o. a. Paul Renner , Fritz Spannagel and Maria Gundrum .

Fruit harvest by Maria Caspar-Filser (undated) formerly in the holdings of the Staatsgalerie Stuttgart , acquired in 1922, confiscated in 1937 as “degenerate”
Link to the picture

In 1936 became their of Impressionism and Expressionism alike influenced paintings and graphics from an exhibition at the Neue Pinakothek by the Nazis "as degenerate " stigmatized and removed, and as a result, which opened in Munich on July 19, 1937 the exhibition "Degenerate Art" from all museums and banned and / or destroyed public collections. During her husband's absence, she was dictated to “his” early retirement application. Under these circumstances, she and her family began to retreat to the previous holiday home in Brannenburg in 1939, where she stayed until her death. During the war, the Caspars did not receive any coupons for painting materials. Her husband therefore decided not to paint in order to enable her to use the few canvases and oil paints that she received from students and her future son-in-law. The apartment in Munich was destroyed in a bomb attack in 1944.

In 1947, Maria Caspar-Filser received the Fine Arts Prize from the City of Munich, and a year later she again took part in the Venice Biennale . She was one of the founding members of the German Association of Artists in 1950 , in whose first annual exhibition in 1951 in Berlin she took part with three oil paintings ( winter night in the studio , still life and autumn landscape ). In the same year she became a member of the Bavarian Academy of Fine Arts . In 1959, the honorary member of the Bavarian Academy of Fine Arts was the first woman painter to receive the Federal Cross of Merit of the Federal Republic of Germany .

On the occasion of an exhibition in the Musée National d'Art Moderne , she was awarded the Médaille de la Ville de Paris in 1961 .

Her brother Benno Filser worked as a publisher in Augsburg and Munich.

Although she was successful as a painter during her lifetime and has received numerous awards, she is one of those women in art who at times had almost been forgotten. It was not until 2013 that her works were shown again to the public - for the first time in over two decades. This exhibition of her pictures took place from March to July 2013 at the Hohenkarpfen Art Museum . It was organized in cooperation with the city of Ochsenhausen , where another exhibition was held (in the Ochsenhausen monastery). At the beginning of 2016 she was in the collective exhibition Empathy and Abstraction at the Kunsthalle Bielefeld . Representing the modern age of women in Germany .