The title of this article is ambiguous. Further meanings are listed under Riedering (definition of terms ) .

Riedering is a municipality in the Upper Bavarian district of Rosenheim and is located on the Simssee .

Riedering, south-western approach to the village center with the Riedering parish church 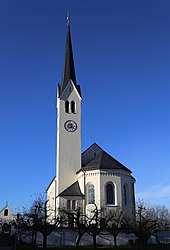 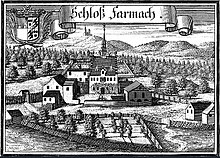 Riedering is considered a Celtic foundation. It was first mentioned in a document in 788 as “Hrodheringas”. Later the place belonged to the Hofmark Neubänen under the barons of Thurn and the Counts of Preysing . The original parish of Riedering has been under the Herrenchiemsee monastery since the middle of the 12th century . Riedering became an independent political municipality in the course of the administrative reforms in Bavaria in 1818 .

On May 1, 1978, the previously independent communities of Söllhuben and Neukirchen am Simssee and parts of the dissolved community of Pietzing were incorporated.

After the local elections on March 16, 2014, the Riedering council was composed as follows:

The directly elected mayor is also a member of the municipal council.

Description of coat of arms : The coat of arms shows a white rafter on a red background (from the family coat of arms of the Barons von Thurn) and a yellow paw cross ( former Herrenwörth canon monastery ) over waves that refer to both the Simssee and the Chiemsee.

The Chiemgauer Volkstheater , a popular theater known far beyond the Bavarian borders, has its headquarters in Riedering . The Riederingen singers are also based here, a folk music group that has existed for a very long time. In the meantime, the young Riederinger musicians have also become known, who, in addition to their performances across Bavaria, also provide musical accompaniment to the plays Geierwally , Der Räuber Kneissl , Der Brandner Kaspar and das Ewig 'Leben and Peer Gynt .