Tuntenhausen is a municipality in the Upper Bavarian district of Rosenheim .

The political municipality of Tuntenhausen has 57 officially named districts: 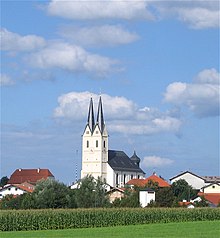 The place name refers to a settler named Tunti or Tunto, whose name has been handed down since around 770 and gave the place the name Tuntenhausen with changing spellings at the latest in the 13th century. The ending "-hausen" denotes a fortified residential complex or a castle.

The Marian pilgrimage in Tuntenhausen has existed since 1441, the year of the first recorded miracle. Since then, Tuntenhausen has been the destination of pilgrims from all parts of Old Bavaria and Tyrol . The parishes of Tuntenhausen and Schönau were incorporated into the Augustinian Canons of Beyharting in the middle of the 13th century . The monastery was an independent Hofmark and could also exercise certain rights. The higher-level legal organizations were the district courts of Rosenheim , Aibling and Schwaben ( Markt Schwaben ). Administrative units emerged after the secularization of 1803. The municipality of Tuntenhausen was expanded on May 1, 1978 as part of the municipal reform to include the municipalities of Beyharting and Hohenthann and the larger part of the municipality of Lampferding.

The place of pilgrimage is also known for the twice-yearly meeting of the Catholic Men's Association in Tuntenhausen , which is attended by leading Bavarian politicians from the CSU .

Districts of the community of Tuntenhausen