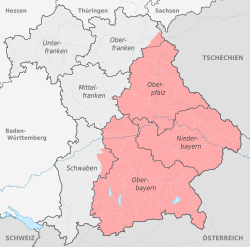 Old Bavaria comprises the parts of the Free State of Bavaria that are part of the cultural tradition of the medieval Bavarian tribe . These are Upper Bavaria , Lower Bavaria and the Upper Palatinate as well as some smaller neighboring regions. At the same time, the term is the name for the inhabitants of this area. Old Bavaria thus includes the areas of the Free State in which the Bavarian dialect is at home.

North of Augsburg , the Lech forms a distinctive language and dialect transition border, while the language transition south of Augsburg is much more fluid. In the Upper Bavarian districts of Weilheim-Schongau and Landsberg am Lech , they speak a Bavarian dialect with strong Swabian influences ( Lechrainian ).

In Upper Franconia , the area around Wunsiedel and Marktredwitz (" Sechsämterland ") belongs to old Bavaria. A North Bavarian or Upper Palatinate dialect is spoken here, which means that this area is also characterized by the Bavarian language and culture. 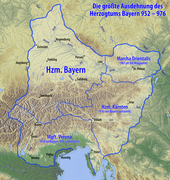 The largest extension of the Duchy of Baiern

In the course of Bavarian history, there was an increasing divergence between the Bavarian national territory and the Bavarian cultural area .

As a result of this development, from the time of the Kingdom of Bavaria, there was a need for a distinction between the Bavarian state territory in terms of culture and language. For those parts of the state that were also part of the Bavarian cultural area, the name Old Bavaria emerged. Franconia and Bavarian Swabians are today "Bavaria" (with "y", meaning citizens of the Free State of Bavaria), but they are not "Baiern" (with "i", so they do not belong to the tribe of the Bavarians) and also no residents of "Old Bavaria" . In Old Bavaria is Bairisch spoken in Franconia East Frankish and in the administrative region of Swabia a Swabian dialect .

In the television program of the Bavarian Radio there is the regular program " Aus Schwaben & Altbayern ", a magazine for the entire south of the Free State that takes up current, cultural and political issues. The counterpart to this for the Franconian part of Bavaria is the " Frankenschau ". The programs are broadcast at the same time, regionally separated.

Old Bavaria is one of the regions in Germany with a relatively high proportion of Catholics . The state is ecclesiastically subordinate to the Archdiocese of Munich and Freising , the Dioceses of Passau and Regensburg and, to a small extent, Eichstätt and Augsburg . In contrast to the Franconian part, there was no increased mixing of denominations here until the Second World War. In the wake of the Second World War, however, more and more Protestant citizens, mostly expellees , moved to the formerly purely Catholic areas.