Parish Church of Our Lady

Oberaudorf is a municipality in the Upper Bavarian district of Rosenheim . The climatic health resort belongs to the planning region of Southeast Upper Bavaria .

Oberaudorf is located in the Bavarian Prealps and the Bavarian part of the Lower Inn Valley . Oberaudorf and Niederaudorf are separated by the course of the western Inn tributary Auerbach .

There are the districts Niederaudorf and Oberaudorf. The municipality of Oberaudorf has 38 officially named districts:

Traces of settlement in the Audorf district go back to the Bronze Age . The place is mentioned for the first time in 780 as an original village in a deed of gift to the Freising Monastery . The Bavarian dukes succeeded in ousting the lords in Mangfallgau , the Counts of Falkenstein , from their possessions and dominions from 1244 and in expanding their own rule in the Inn Valley. The Auerburg above Oberaudorf is mentioned for the first time in the Wittelsbach house contract of Pavia in 1329. Around 1350 the Auerburg was mentioned as a court and official seat of a caretaker . Since the 15th century, the judicial district has been divided into the main teams Kiefersfelden, Nieder- and Oberaudorf and Fischbach. After the Landshut War of Succession (1503–1505) the courts of Kufstein, Kitzbühel and Rattenberg were lost to the Habsburgs . The Auerburg was from now on border fortress to Tyrol and was reinforced accordingly. In the Austrian War of Succession , Austrian troops captured Oberaudorf and the Auerburg on May 4, 1743. After the Peace of Füssen in 1745, the fortress was razed by Kitzbühel miners in 1747. The Napoleonic era brought numerous troop marches, but no fighting in the village. In the course of the administrative reforms in Bavaria , the municipal edict of 1818 created the municipalities of Ober- and Niederaudorf.

In 1848 the abolition of upper ownership and the patrimonial courts caused upheavals. From the middle of the 19th century, the place was discovered as a summer resort by the first holidaymakers. In 1857 it was connected to the new Rosenheim – Kufstein line . In 1868 the previous Catholic vicariate became its own parish. Large fires in 1823 and 1857 led to brisk construction activity. The place was still affected by air raids in the last days of the Second World War , as the Wehrmacht was still facing the American soldiers with the last of their strength. From 1988 to 1992 the Oberaudorf-Ebbs power plant was built on the Inn .

Mayor is Matthias Bernhardt (Free Electorate of Oberaudorf). He prevailed in the local elections on March 15, 2020 with 68.1% of the vote against two competitors. Due to a vacancy in the first mayor's post, Bernhardt took up his post on April 1st and not on May 1st, 2020. He is the official successor of Hubert Wildgruber (CSU, Mayor from 2002 to 2020), who was no longer available for election in 2020 for health reasons. Wildgruber succeeded Alois Brunner (CSU) in 2002.

The coat of arms of Oberaudorf shows "a red-armed golden falcon with a red collar standing in blue on a golden three-mountain, ready to fly." It was awarded by the State Ministry of the Interior in 1921 and is based on early local history. The falcon was the talking shield image of the County of Falkenstein, which died out around 1272 . 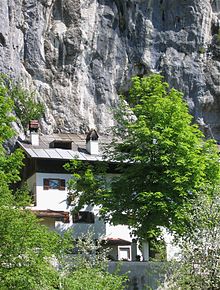 Weber on the wall

Bakery on the village square

In 1998, according to official statistics, there were 19 employees in the field of agriculture and forestry, 221 in the manufacturing sector and 294 in the trade and transport sector at the place of work. In other economic sectors 728 people were employed at the place of work subject to social security contributions. There were a total of 1281 employees at the place of residence subject to social insurance contributions. There were 16 companies in the main construction trade. In addition, in 1999 there were 75 farms with an agriculturally used area of ​​1655 ha, of which 37 ha were arable land and 1608 ha were permanent green space.

Oberaudorf is an important climatic health resort and winter sports area in the Bavarian Inn Valley. In addition to an extensive network of hiking, biking and touring trails, the place offers guests and residents a ski jump, toboggan runs, a chairlift, cross-country skiing trails and ski lifts (with snow-covered slopes) and in summer through the surrounding lakes with a beach volleyball court and the Luegsteinsee lido with a giant water slide and white water Auerbach good opportunities for recreation and leisure activities. The newly designed Hocheck leisure area also has an alpine summer toboggan run. Germany's largest floodlight system for skiers and snowboarders is in operation on the Hocheck in winter. The toboggan run there is also illuminated in the evening.

Between 1999 and 2011 there was also the possibility of taking a passenger ship on the Inn from Oberaudorf via Niederndorf , Ebbs , Kiefersfelden to Kufstein from May to October .

In the district of Tatzelwurm, a natural toboggan run is built annually , on which German and Bavarian championships in natural tobogganing are held. With the Kahlanger-Schanze there is a normal hill formerly also used for international jumping. The Hocheckschanzen, which are also available, are still used today for children and youth training.

To improve the supply of the lower Inn Valley from Brannenburg to the state border, a filling transmitter was built on the Schweinberg. This broadcasts the following radio stations: