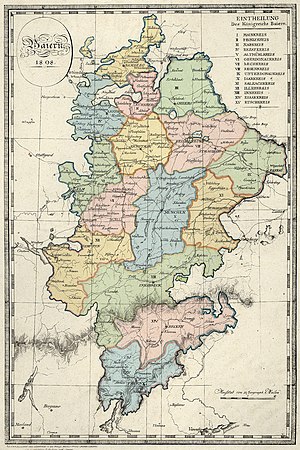 The municipal edicts were decrees of King Maximilian I and part of the " Revolution from Above " in the Kingdom of Bavaria at the beginning of the 19th century. They were mainly designed by Maximilian Joseph Graf von Montgelas and Georg Friedrich von Zentner .

The background to the reforms was the state of the Bavarian state finances , which required a reorganization of the financial administration and a tax reform. With the establishment of his own constitution , King Maximilian I also anticipated the introduction of the French hegemonic system by Emperor Napoleon Bonaparte in the Kingdom of Bavaria .

The first municipal edict of July 28th and September 24th, 1808, had the aim of forming the political municipalities. The parish boundaries should exactly match the tax district boundaries. Uniform land registers were created and the offices were divided into tax districts.

In addition, under Montgelas, the state nationalized the assets and the numerous municipal foundations . It was precisely this that turned out to be a failure, since the decision-making powers had been shifted too much upwards to the ministries, which made the state apparatus too cumbersome. Even under Montgelas, the repatriation of municipal assets to local self-government was tackled. The municipality's self-government was largely restored through the municipal edict of 1818.