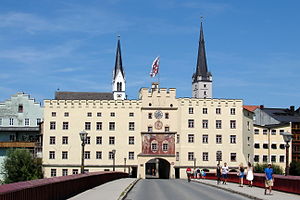 Bruckor on the Inn Bridge

Wasserburg am Inn offers a special feature with its scenic location: the old town is located on a peninsula that is almost completely surrounded by the Inn (approx. 7/8) and can only be reached via a narrow headland. From the steep bank on the opposite side, the Innleiten, which is up to 70 meters high, one overlooks the entire old town with its buildings dating back to the Middle Ages. In the river, right next to the city, lies the small, wooded Capuchin Island , the name of which is reminiscent of the former Capuchin Monastery of Wasserburg .

As can easily be seen from the floor plan of the old town and the outwardly decreasing age of the buildings, the peninsula has grown steadily to the east and north over the past centuries, while the Inn has eroded the steep bank opposite. This process only came to a standstill in the first half of the 20th century when the banks were fortified as part of the power plant construction on the Inn. On old cityscapes and photographs it can accordingly be seen that the impact slope opposite was practically not overgrown until a few decades ago, whereas today it is largely forested.

In accordance with the low height of the alluvial land compared to the water level of the Inn, which is subject to strong fluctuations, large parts of the old town were regularly flooded during floods , until this could so far be prevented by the construction of the flood clearance in 1986.

Wasserburg am Inn has 22 districts:

Some districts of Wasserburg are referred to as districts, but are not districts according to the Bavarian municipality directory despite the place name signs:

The name of Wasserburg is probably derived from the similar to a Wasserburg nearly surrounded on all sides by water castle from. The earliest surviving documents and plans also use this name for the settlement at the foot of Wasserburg Castle . In the maps of Apian in the 16th century, the settlement is strangely referred to as "Newenhochenaw" (Neuenhohenau). The name could refer to the monastery "Hohenoue", located about seven kilometers south of Wasserburg aI, which is known today under the name Altenhohenau .

In addition to Bronze Age finds, archaeological findings on the outskirts of the medieval city show the remains of an area enclosed by a tuff stone wall from the middle of the 9th century with a burial place. The wall, which apparently collapsed later, shows traces of fire, the settlement had at least been abandoned in the excavated area. A skeleton known as " Fletzi " from this period was also found.

Wasserburg is mentioned for the first time in a document dated from 1085 to 1088, a copy of which is preserved in a tradition book of the St. Emmeram monastery in Regensburg . Since it already speaks of a "Dietrich von Wasserburg", the process, which has long been seen as the founding of the city, that Hallgraf Engelbert moved his ancestral seat from Limburg Castle to his " Wasserburg " in the middle of the 12th century , has to be questioned. The associated document has now also been recognized as a forgery.

The settlement at the foot of the castle soon became prosperous thanks to shipping on the Inn, the salt trade and the associated income, and in the first half of the 13th century it acquired city rights. In 1220 the city already had ring walls and a moat, but in 1247 Wasserburg was conquered after 17 weeks of siege by Duke Ludwig (later Ludwig II., The Strict ). The possessions of the Count of Wasserburg passed to the Duke and Wasserburg was thus Wittelsbacher possession (inheritance contract). In 1248 Wasserburg was included in the Bayerische Landtafel (Landstands), four years later the town hall was built.

Little is known about the early history of the city, as all documents from this period were lost in the city fire of 1339.

On January 24, 1552, the elephant Soliman , a gift from Joan of Spain to Maximilian II , traveled through the city of Wasserburg.

In the Thirty Years' War Munich was occupied by the Swedes, who came to the Inn around 1632. The inhabitants of the left bank therefore fled, often accompanied by their cattle, to the right side of the river, where the places consequently had to take in many refugees. In addition, the imperial and Bavarian soldiers were stationed there, which caused resistance among the population. About 1500 farmers from the judicial districts of Kling and Kraiburg gathered in 1634 near Achatz above Wasserburg. After they did not follow the official request to separate, the Capuchin monk P. Johann was sent as a mediator. He succeeded in appeasing the farmers for the time being. But when imperial and Bavarian soldiers were once again stationed to the right of the Inn, the uprising flared up again, smaller cavalry detachments were attacked and farmers captured in Kling Castle were freed. Another Capuchin monk, P. Romanus, was able to mediate between the farmers and the Elector Maximilian I , who had moved to Salzburg . But when the farmers refused to separate, the military was sent to the Achatzberg. 170 farmers were captured there and three of them were executed as ringleaders .

In the later Thirty Years' War, all bridges over the Inn, with the exception of Wasserburg, were broken off by the Elector; here, however, the route across the river could be successfully defended against the Swedish troops, which played a decisive role in the defense of the areas east of the Inn. The water level of the Inn, which was particularly high at that time due to prolonged rain, was also able to prevent the enemy from crossing the river near Mühldorf .

On May 1, 1978, the previously independent communities Attel (with Reitmehring) and Edling were incorporated. On April 29, 1981 Edling was spun off from the city and again became an independent municipality in the Rosenheim district.

24 voluntary city councilors together with the full-time mayor form the city ​​council of Wasserburg am Inn. After the election on March 16, 2014 , it was composed as follows:

The density of cultural institutions in the small Inn town is high. In and around Wasserburg, many artists from the visual and performing arts have also settled.

An earthy-alkaline mineral spring under the name Agatiusquelle or Agatiusbad has been known near today's St. Achatz Church since around 1483 . The medicinal water should primarily help against hemorrhoid problems. Later the water was led 1,400 paces to the bath house there with wooden pipes.

In 1857 the building was rebuilt with an expansion of the bath. Previously only the townspeople used the water for cleaning, but from this time on it was also used for medical purposes. The bath enjoyed economic success until the municipal water supply system was built in 1888, after which interest gradually declined. 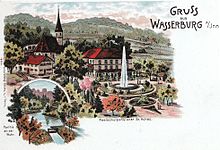 As a result, the decision was made to convert the bath into a water spa based on the principles of Sebastian Kneipp and despite some inconsistencies during the planning, the project was completed on February 1, 1890. The demand was great, so in 1891 another 65,000 marks were invested in the expansion of guest rooms as well as the construction of a dining and lounge area and a garden with a fountain .

But when a new doctor was hired in 1892, who instead of Kneipp cures used other healing methods such as therapeutic gymnastics , electrical cures or diet cures, a dispute broke out between him and the employed nuns. Then the spa guests stayed away and the spa gave way to a boarding school.

Today there is one of the largest Kneipp clubs in Bavaria in Wasserburg .

See also : List of architectural monuments in Wasserburg am Inn

The medieval old town of Wasserburg am Inn is almost completely preserved and as a whole is extremely worth seeing. Some outstanding buildings in the old town are:

A little outside of the old town:

Wasserburg's economy is shaped by the large industrial plants on the outskirts. The plants of the Bauer dairy , RKW SE (Rheinische Kunststoffwerke), Wasserburger Arzneimittelwerke and Gronbach are located in the south . When coming from Munich you can see the industrial silhouette of Meggle AG in the Reitmehring district from afar .

Numerous service providers and retailers are represented, especially in the old town and the surrounding districts. The trade register records a total of around 1000 registered trades.

Since the municipal reform in 1972, Wasserburg am Inn is no longer a separate district and therefore no longer a district town.

Wasserburg am Inn is strongly influenced by the health system. The Inn-Salzach-Klinikum (district hospital Gabersee until December 31, 2006) supplies all of Southeast Bavaria with its services in the field of psychiatry and neurology. Together with the Triamed District Clinic and numerous health facilities, well over 1,500 people are employed in the health sector. The number of specialists is far above average for a medium-sized center.

In the Attel district there is also a (non-church) institution for the mentally handicapped, the Attl Foundation .

One of the special features of Wasserburg is the large number of schools: the city with only approx. 12,500 inhabitants is visited by over 6,000 students.

The Grafing – Wasserburg (popularly known as Filzenexpress ) and Mühldorf – Rosenheim lines meet at Wasserburg (Inn) Bahnhof in the Reitmehring district . The Wasserburg Bahnhof – Wasserburg Stadt railway line continues to the Wasserburg Stadt railway station in the old town. The city bus has been running on this section since passenger transport was discontinued in 1987. In 2004, the city of Wasserburg took over the railway infrastructure for the four-kilometer branch line to the old town station from DB Netz to enable continuous train connections to Munich. Due to the high renovation costs, the city council decided to shut it down, but this has not yet taken place due to the interest of a railway consortium to take over.

The federal highways 15 run through Wasserburg  from Regensburg via Landshut to Rosenheim, directly on the German holiday route Alps – Baltic Sea , and 304 from Munich to Salzburg. State roads 2352 and 2091 cross the city as further important regional connecting roads .

The rail transport service of the Filzenexpress in the direction of Munich is supplemented between Grafing and Wasserburg by the 9421 bus operated by the regional transport company Upper Bavaria .

Wasserburg from the viewpoint "Schöne Aussicht"

Wasserburg from the viewpoint "Schöne Aussicht" in April

Panorama photo of the Inn Bridge

Wasserburg City view from the bank of the Inn

Districts of the city of Wasserburg am Inn