Coat of arms of the prince-abbey of Sankt Emmeram

Beginnings as an imperial monastery

Frescoes in the cloister of the monastery

The monastery of Sankt Emmeram emerged from a Georgskirche above an early Christian burial site, which was in the urban settlement area of ​​the Roman Castra Regina . In the 7th century AD, St. Emmeram of Regensburg was buried there. In the 8th century AD a monastery of the order of the Benedictines was built , whose rulers were the bishops of Regensburg in the diocese of Regensburg from 739 to 975 . After 920, the monastery buildings were incorporated into the area of ​​the emerging city through the construction of the Arnulfinian city wall under Duke Arnulf I. In 972 Sankt Emmeram was raised to the status of an imperial monastery and in 975 Ramwold was appointed its first independent abbot.

Almost at the same time as the St. Emmeram Monastery was founded, Duke Tassilo III gave. of Bavaria the monastery land in the Mark Chamb. The Benedictines of Sankt Emmeram supposedly built a cell in Chammünster with the Chammünster monastery as early as 739 as a Christian mission base for the Bohemian border area. The first documentary mention of the Chammünster Monastery, however, dates back to 819. Around the year 910 the cell was probably destroyed by the Hungarians. In 975, as a result of the separation of the bishop's chair and St. Emmeram monastery by Wolfgang von Regensburg, the Chammünster cell was assigned to the bishop.

In the 11th century, Sankt Emmeram was the starting point for the Cluniac reform and the monastery reform of Gorze in the Duchy of Bavaria and in the Nordgau . Bishop Wolfgang von Regensburg and Abbot Ramwold were supporters of this reform movement of the Roman Catholic Church . In 1295 gave King Adolf von Nassau the Abbey , the regalia , which St. Emmeram the Reichsunmittelbarkeit received; In 1326 it obtained the ecclesiastical exemption , which the monastery had unsuccessfully sought in the middle of the 11th century by the dean and head of the monastery school Otloh of St. Emmeram by forging documents from kings Arnolf of Carinthia and Ludwig the child .

During this time the scriptorium of the St. Emmeram Monastery developed into a center of illumination. The sacramentary of Henry II (between 1002 and 1014) and the Uta Codex (shortly after 1002) were created. The importance of the monastery as a cultural center declined in the 16th century when Regensburg became Evangelical-Lutheran in 1555 due to the Augsburg Imperial and Religious Peace , which Ottheinrich of the Palatinate had joined from the Wittelsbach family .

Obtaining the title of prince abbot

After the beginning of the Thirty Years' War (1618–1648) and the re-Catholicization in Bavaria, after 1625 in the 17th and 18th centuries an upswing in the importance of Sankt Emmeram under the abbots Frobenius Forster and Cölestin Steiglehner and the Fathers Roman Zirngibl and Placidus Heinrich began which primarily promoted knowledge in the natural sciences. Members of the order of the Benedictines were able to fall back on a long tradition of astronomical research, including the astrolabe of Wilhelm von Hirsau . The academy of the monastery in the now free imperial city of Regensburg developed during this time into a counterpoint to the Bavarian Academy of Sciences in Munich.

After the Thirty Years War, in 1658, the Abbot of St. Emmeram took part in the Reichstag with a curate vote from the Rhenish prelates . In 1731 the emperor confirmed the dignity of the prince of the abbot of the now dignified imperial abbey of Sankt Emmeram, which was part of the Bavarian imperial circle. From 1731 to 1733 the redesign of the abbey church of St. Emmeram, which was burned out several times and then rebuilt again and again, was carried out by the brothers Cosmas Damian and Egid Quirin Asam in the Baroque style .

Overview plan of the entire system

Sankt Emmeram and the monastery area fell to the newly founded Principality of Regensburg in 1802/1803 with the imperial city of Regensburg , the Hochstift Regensburg , the Reichsstift Obermünster and the Reichsstift Niedermünster under the prince Carl Theodor von Dalberg . In 1810 this came to the newly founded Kingdom of Bavaria under the Wittelsbachers through the Paris Treaty . A large part of his art treasures, for example the Arnulf ciborium , and his valuable books (including the Muspilli and the Codex Aureus ) came to Munich . During this secularization , the monastery buildings came to the Princely House of Thurn und Taxis in 1803/1812 , which had inhabited individual parts of the building since 1748. They had the St. Emmeram Monastery converted into the residence of St. Emmeram Castle . The abbey church became the parish church of the city of Regensburg and was given by Pope Paul VI. on March 5, 1964 with the Apostolic Letter Terra sacra raised to the minor basilica . 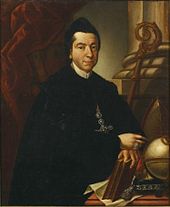 → Main article : List of Abbots of the Saint Emmeram Monastery

There is already a picture of the coat of arms (fields 2 and 3) from 1358. In Johann Siebmacher's coat of arms book from 1605, an eighth coat of arms is shown. This coat of arms was partly used with a central shield on which St. Emmeram is depicted with the ladder. Fields 1 and 4 are likely to be a reproduction of the alleged coat of arms of Charlemagne, which includes the imperial eagle and the "French" lilies . 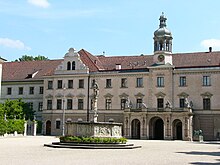