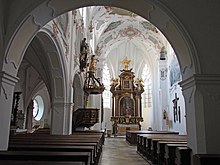 The Sankt Rupert Church is a church building, the former Roman Catholic parish church of the Imperial Abbey of Sankt Emmeram , on Emmeramsplatz in Regensburg . It is dedicated to St. Rupert of Salzburg .

The two-aisled church was built in the second half of the 11th century as a Romanesque building, but was often rebuilt in the style of the respective time. The main nave dates from the 14th century, the choir from 1405, the four-column high altar with the image of Duke Theodo's baptism by Saint Rupert from 1690 and the interior from the 17th and 18th centuries. The former churchyard of the Upper City, the Ruperti cemetery in the parish garden, was closed at the beginning of the 19th century. The Catholic Lazarus Cemetery was created as a new cemetery in the city ​​park . Remains of tombstones from the Rupert cemetery can be found on the walls of the forecourt of St. Emmeram. 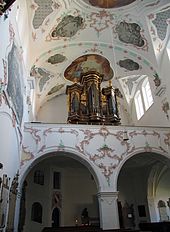 In 1774 there was an organ of unknown origin. The shape of the housing points to the Brandenstein school and probably originates from Michael Herberger from Stadtamhof . Around 1850–1860, Anton Breil built a new mechanism behind the historic prospectus . The instrument still has a complete principal choir , but has stops in the 8 'range that are typical for Breil . The manual loading is a slider chest , the pedal load a cone chest . The work has been preserved in its original condition and is the second oldest church organ in Regensburg. The disposition is: