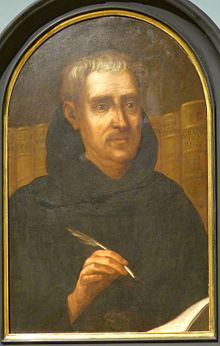 Abraham a Sancta Clara - portrait in the Vienna Museum on Karlsplatz

Abraham a Sancta Clara OAD (religious name), also Abraham a Santa Clara , (* July 2, 1644 as Johann Ulrich Megerle - also called Megerlin - in Kreenheinstetten near Meßkirch ; † December 1, 1709 in Vienna ) was a Catholic clergyman , preacher and Upper German writer . With around 600 individual writings, he is considered the most important German Catholic preacher and poet of the Baroque era .

Johann Ulrich Megerle was born in 1644 as eight of ten children of the innkeeper Matthäus Megerle and his wife Ursula (née Wagner) in the restaurant Zur Traube von Kreenheinstetten and baptized on July 3, 1644. His place of birth is in the Swabian Alb in the Heuberg region near Meßkirch. Although his father Matthäus was a serf of the princes von Fürstenberg , he ran the Gasthof Zur Traube and was considered one of the richest men in the village. The village priest noticed the boy's intelligence; he made sure that he attended the castle school in Meßkirch from 1652 with the consent of the princely rule.

After his father's death in 1656, his uncle and guardian Abraham Megerle made it possible for him to attend the Jesuit grammar school in Ingolstadt until 1659. Abraham Megerle had been a composer and cathedral music director in Salzburg a few years earlier from Emperor Ferdinand III. been raised to the nobility. 1660 Johann Ulrich Megerle moved to the high school of the Benedictines in Salzburg and remained there until 1662. His teacher was probably Father Otto Aicher .

Entry into the order, success as a preacher

Monument at the Burggarten in Vienna

In 1662 he entered the order of the Augustinian barefoot in the Maria Brunn monastery near Vienna (today the 14th district of Vienna) , where he took the name Abraham a Sancta Clara out of gratitude to his uncle . The prerequisite for entering the order was release from serfdom at the Meßkircher court, against payment of 12 guilders. Philosophical and theological studies followed in Vienna, Prague and Ferrara .

1666 Abraham a Sancta Clara received in Vienna Augustinerkirche the priesthood . From 1667 to 1668 he worked as a holiday preacher in the Taxa monastery in Odelzhausen near Augsburg . In 1669 the popular preacher was ordered back to Vienna "because of his excellence", where he preached alternately on Sundays and public holidays in almost all churches and monasteries until 1672. He always denounced the vices of the time, such as gluttony , drunkenness and greed, and warned the audience to orient their own actions on Christian principles.

Abraham a Sancta Clara delivered the first traditional sermon in honor of the patron saint Leopold on September 15, 1673 in front of the imperial court, who was impressed by his verbal power. On April 28, 1677, Emperor Leopold I appointed him sub prior and imperial court preacher. Abraham a Sancta Clara now associated with the most distinguished circles and used his relationships for social works. Through "his popular sermons and writings" he developed "a far-reaching effectiveness".

During the eleven-month plague in Vienna in 1679, Abraham a Sancta Clara lived in isolation for five months in the house of the Lower Austrian Land Marshal Count Johann Balthasar Hoyos , for whom he read mass every day. Here he worked on his first extensive work, Merck's Wienn! in which the theme of Memento mori is elaborated. In 1680 Abraham was prior of his mother monastery, and in 1682 as Sunday preacher at the monastery of St. Anna in Graz , where he was also prior after three years.

During the second Turkish siege of Vienna in 1683, Abraham a Sancta Clara lived on in Graz and preached there about the danger to Christendom caused by sins. Thousands of people are said to have flocked to his mass sermons in squares in Vienna, and numerous individual prints of the (Graz) sermons were circulated as pamphlets. He is said to have organized litigation processions and forty-hour prayers in order to strengthen the perseverance of the population until ultimately the united armed forces under the leadership of the Polish King John III. Sobieski were able to liberate the city in the Battle of Kahlenberg .

From 1686 Abraham a Sancta Clara worked as prior and later as provincial at the monastery at Münzgraben in Graz. This was his literary heyday and he was festival and guest preacher in many monasteries and churches. On behalf of his order, he traveled to Rome several times (1686, 1689, 1692) and, in addition to collections of sermons and articles on fool's literature, published his main work, Judas, the Ertz-Schelm (four parts 1686, 1689, 1693 and 1695), a collection of writings and sermons and poems. From 1690 Abraham a Sancta Clara headed the German-Bohemian order province of the Augustinian Barefoot from Vienna . In 1697 he was given the title of definitor secundus as an ecclesiastical administrator .

The various offices and the continued preaching and writing had undermined his health, in addition to longstanding suffering from gout . He died on December 1, 1709 at the age of 65 and was buried in the crypt of the Augustinian Church in Vienna. 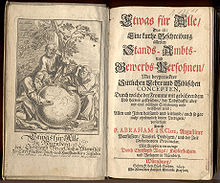 Something for everyone - title and title copper

Abraham a Sancta Clara is regarded as the ultimate Catholic baroque preacher. His sermons, which have become poetry, are bursting with strength, crudely entertaining, at the same time subtle and often intolerant. In the Baroque style, he was less concerned with stringent brevity than with the extravagant presentation of scholarship, stories, parables and wordplay, all loosely connected by overarching thoughts.

As a priest, Abraham's ministry was primarily pastoral. His goal, which is often given in the titles and prefaces of the works, is to bring people to their souls. Since he thinks in terms of salvation history , he assigns all human activity to the opposing concepts of salvation and sin. In his moral doctrine, for example, he praises the Christian virtues embodied in the saints , denounces vices and also preaches against Judaism .

The success of his works and his sermons was also based on the fact that Abraham a Sancta Clara took into account the reality of life of his listeners and readers, as for example in his class theory Something for All . Abraham's descent from the lower class made him credible to his audience.

Works published during his lifetime

He came to write through the impressions of the plague epidemic of 1679. In the Merck's Wienn! That is: the furious death comprehensive description (1680) Abraham a Sancta Clara depicted death as an allegory in the spirit of the then popular dance of death . Although after the expulsion of the Viennese Jews in 1670 there were no Jews in Vienna at that time, he made for responsible for the epidemic of witches and Jews. Also in his writings Lösch, Wienn! (1680) and Große Todtenbruderschaft (1681), Abraham a Sancta Clara dealt with the subject of death that would conquer all and threatened the agony of purgatory .

The second Turkish siege of Vienna in 1683 inspired Abraham in the same year to write the pamphlet Auff, auff, you Christians! That is: a mobile refreshment of the Christian weapons against the Turkish Bluet-Flukes , in which "the Türck" appears as a "copied Ante-Christ " and the Christians are called to fight, to unity and to repentance. This pamphlet was Friedrich Schiller's model for the Capuchin sermon in Wallenstein's camp .

Abraham a Sancta Clara published a collection of occasional writings under the title Reim dich oder ich lis' dich (1684), as well as a report Gack / Gack / gack / Gack / a Ga (1685) about the egg miracle of Taxa . After that, from 1686 to 1695, under the title Judas the arch rascal, he combined a large number of satirical, humorous and moralizing sermons into a four-volume apocryphal biography of Judas Iscariot .

At the same time, Abraham wrote a textbook on Catholic morality, the Latin Grammatica Religiosa (1691), with an overwhelming abundance of stories and examples, which, like Judas the arch rogue, are dedicated to his friend, Abbot Raymundus Regondi of the Altenburg Abbey . All other works string together details in poems, reflections and sermons: Something for All (1699), Dying and Heirs (1702), Newly Opened World Galleria (1703), Heilsames Misch-Gemasch (1704) and Huy! and Pfuy! der Welt (1707) are essentially picture books with text assigned to the class literature , such as Sebastian Brant's ship of fools , the direct model for the fools' nest (1710).

Abraham a Sancta Clara's last two books appeared in the year after his death: Well-Filled Wine Cellars (1710) was, according to the original wording of the print, “compiled” by the author in his last illness. His last book, Particularly decorated and decorated Todten-Chapel or general Todten-Spiegel (1710), he is said to have written close to death. With him he took up the theme of his first literary attempts at the time of the plague: dying and death.

The following were gradually published from his estate: Abrahamisches Bescheidessen (1717), Abrahamische Lauberhütt (3 volumes, 1721–1723) and Abrahamisches Behab dichwohl! (1729). The Geistlicher Kramerladen collection (1719) contains sermons by Abraham that were printed individually, Mercurialis or Wintergrün (1733) is fake and Centi-folium stultorum in Quarto (1709) was wrongly ascribed to Abraham. Abraham wrote some works under the pseudonyms Gaudentius Hilarion , Hilarius von Freudenberg and Theophilus Mariophilus . Abraham a Sancta Clara is also said to have written several mystery plays that have not survived in Latin.

Notes on the work

Abraham had "bleeding, watering and speaking statues of saints" appear in droves in his sermons, but he himself was scientifically educated and preferred astronomy to astrology and chemistry to alchemy. He advocated sharpening one's mind through reading. He had come out against courtiers and justice in favor of the great gentlemen.

Against the women who keep to the better from the body , even more so against the greedy he agitated Jews constantly: "Because of the rigorous sound of the fanatic mixes in his speeches." Abraham a Sancta Clara's "anti-Jewish Fury" has been prepared by National Socialism estimated will but, according to Staguhn, often left out in today's selected volumes.

Abraham's poems originally inserted into the prose works are often selected for anthologies , for example by Karl Krolow and Marcel Reich-Ranicki .

Grave inscription of the old ones Krampel, Krüppel, Krippelwar,
Lies all sorts of things hereunder,
stilts, crutches, pair and pair,
You don't believe what junk.
We have reached a long year
and white paroxes,
The eyes were completely pale,
The cheeks were like socks.
The dull body, the trampled animal,
doing nothing but coughing, pausing,
the noses like the Schleifergschier,
Pfui Deixl, it makes a horror.
The helper's leg no longer in the mouth,
The mouth an empty pocket,
We often needed three whole hours to snack on a crumb of
bread.
The dull head, the trembling head,
always give the rhythm.
The lump pot showed enough: Life is good
for la, mi, fa,
And yet, as biting death
would often snap at us
, We wanted to soon hi soon hot,
He shouldn't catch us.
Don't like, don't like, no more then
we let our lives go.
It wasn't about death,
but about giving an account.

The schoolmaster, copperplate engraving from Something for All

The bookbinder, copperplate engraving from Something for All

Around 600 different individual publications by Abraham a Sancta Clara are still known today.