Leopold III. as a fountain figure in Klosterneuburg 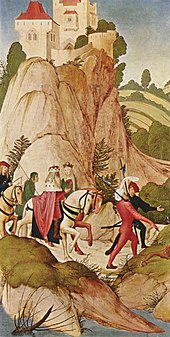 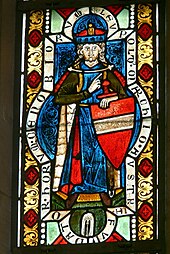 Leopold III. , called the saint, the mildness or the pious (* 1073 in Gars am Kamp or Melk ; † November 15, 1136 near Klosterneuburg ) from the house of the Babenbergs , was from 1095 to 1136 margrave of the Bavarian Marcha orientalis ( Ostarrîchi ). A saint of the Roman Catholic Church since 1485 , he became the patron saint of Austria in general as well as of Vienna , Lower Austria and, together with St. Florian , of Upper Austria in particular.

Leopold was the son of Margrave Leopold II and his wife Ida ; Leopold called himself Princeps Terrae , which already indicates the awareness of an independent state rule. He was also under discussion as a candidate for the election of a king in 1125 , but is said to have waived with references to his advanced age (50 years) and the number of his sons - this could have led to problems with the succession. Possible reasons are also the lack of domestic power and perhaps also the consideration for the opposing candidate Friedrich von Schwaben , his stepson. Leopold died on November 15, 1136 as a result of a hunting accident. He is buried in Klosterneuburg Abbey , which owes its existence to him.

Leopold's family policy contributed significantly to the expansion of the property and to the social upgrading of his house.

His first marriage before 1103/1104 was Adelheid von Perg / Machland, a member of the noble family of the Lords of Perg and Machland in Machland , Upper Austria, which significantly increased his influence in what is now Lower and Upper Austria north of the Danube through acquisition of ownership and bailiwick rights could amplify. Adelheid was the daughter of Walchun I of Perg / Machland, (* c. 1050, † 1114) and Adelheid († 1090; widow of Count Heinrich II. Von Formbach and possibly Countess von Sulzbach ).

Leopold married Agnes von Waiblingen (* 1074, † 24 September 1143), a daughter of the Roman Emperor Heinrich IV (1084-1105) and his wife Bertha von Turin ( House of Savoy ) , in 1106 . Agnes was the widow of Friedrich I von Hohenstaufen , Duke of Swabia († April 6, 1105). Through this relationship with the Salians , Leopold was able to rise to the first rank of the imperial aristocracy, as he was now not only brother-in-law of Emperor Heinrich V , but also the stepfather of the Duke of Swabia, Friedrich II, and the Duke of Eastern Franconia and later German King Konrad III. von Hohenstaufen was. He was also given important royal rights in his margravate. He owes this social advancement to a - controversial - tactical maneuver in that he switched to the latter before the decisive battle between Emperor Heinrich IV and his son, who later became King Heinrich V. The Battle of the Rain River took place in connection with the investiture dispute ; Leopold and Heinrich V represented the party loyal to the Pope.

He was Vogt of Klosterneuburg Monastery and all the monasteries that were under his father's bailiwick. Although he was the logical successor as the eldest son and through his training as his father's deputy, he was after the death of Margrave Leopold III. "The saint" passed over in the succession in favor of a son of the imperial daughter Agnes von Waiblingen. However, he inherited numerous properties near Mödling and Klosterneuburg as well as in the Vienna Woods from his mother . Adalbert was buried in Klosterneuburg. A stained glass window with the inscription: "Here is buried the firstborn son of St. Leopold named Adalbert, Duke of Austria, first Vogt of the monastery" reminds of him.

From the 2nd marriage there were 17 children, including:

⚭ 1133 William V the Elder Margrave of Montferrat (Monferrato), † 1191 from the house of the Aleramides

⚭ Henry III. Burgrave of Regensburg , Vogt of St. Emmeram andprüfunging, Count in the Danube Bend and at the lower Altmühl († 1174)

Memorial plaque on the Leopoldsberg

He is mainly remembered for the development of the country, which goes hand in hand with his activity as a monastery founder. Its most important foundation is Klosterneuburg , which was founded in 1108. According to legend, it was the place where an apparition of Mary showed him the veil of his wife Agnes, which had been lost on the hunt during the years before. Klosterneuburg was expanded into a residence in the following years. Other monasteries were founded in Heiligenkreuz Abbey and Klein-Mariazell . These foundations served evangelization , education and the development of the still heavily forested area.

The cities were also promoted under him, in addition to Klosterneuburg and Vienna about Krems , which was given a mint. The Kremser pfennig minted in Krems gained importance on the money market.

The first German-language literary testimonies from Austria, namely by Heinrich von Melk and Ava , also come from his time .

On January 6th, 1485 Leopold was canonized by Pope Innocent VIII , which was very much in the interests of the Habsburgs . Even before Innocent VIII, Innocent VI. and Sixtus IV also initiated canonizations of Leopold, which were discontinued. Leopold's day of remembrance is November 15th. On the occasion of the canonization and the subsequent translation ceremony , there were secular festivities such as tournaments, banquets and dances in Klosterneuburg Abbey. These merrymakers are still celebrated today, on the Leopoldi Festival, every November 15th. The celebration is popularly known as the Leopoldimarkt or Leopoldifest. Part of the attractions is the barrel slide . This is done by sliding down over the thousand-pound barrel in the binding post of the pen. The associated fair is visited by numerous people from Vienna and large parts of Lower Austria. There is no school on this day in Vienna and Lower Austria.

In 1663, under the government of his namesake Emperor Leopold I, St. Leopold in place of St. Koloman was raised to the status of patron saint of Austria. In Austria, Leopold churches were consecrated in his name.

Feast day of the king

In Belgium , November 15 has been the king's feast day (with interruptions) since 1866 , but is not an official national holiday. He was chosen by King Leopold II because it was his name day. On the other hand, the German-speaking Community in Belgium referred to the feast day of the king , which has been celebrating the day as its regional holiday since 1990 .

Since the 500th anniversary of his canonization in 1985, Klosterneuburg Abbey has awarded the Leopold Cross as an award to people who have made great contributions to the Abbey.

Since 2008, Klosterneuburg Abbey has awarded the St. Leopold Peace Prize to artists who deal with a humanitarian issue .