The flag of the Margraviate of Montferrat: horizontally red and white stripes with unequal proportions of colors 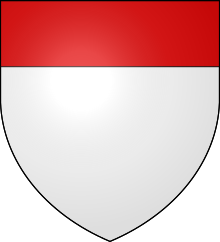 Coat of arms of the Margraviate of Montferrat 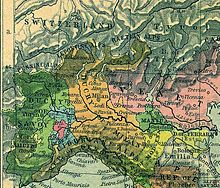 Montferrat ( Italian Monferrato ) was a margraviate in Piedmont , between Turin and Genoa . It was raised to a duchy in 1573.

The territory of the margraviate stretched from north to south in two separate parts between the Maritime Alps and the Po , covered 2750 km² and had Monferrato as its capital. Charlemagne installed counts to administer the country, who were raised to margraves by Otto the Great in 967 .

The ruling family of the Aleramides took part in the first place in the crusades , and in the conquered lands placed a number of monarchs, above all the two sons and a grandson of Margrave Wilhelm V :

In the 14th century , the margravate was inherited by the paleologists , who in turn bequeathed it to the Gonzaga in 1533 . Raised a duchy in 1573, a small part of the country came to the House of Savoy after the War of the Mantuan Succession (1628–1631) , which maintained old claims (going back to 1330). The greater part of the duchy remained with the Gonzaga-Nevers until they switched to the French side in the War of the Spanish Succession and therefore all imperial fiefs of the Gonzaga were withdrawn by Emperor Leopold I.

With the Peace of Utrecht in 1713 and Baden in 1714, the claims of the House of Savoy to the territory of Montferrat, which had already been confirmed in the Peace of Münster in 1648, were taken into account and the entire Duchy was given to Duke Victor Amadeus II as an imperial fief.