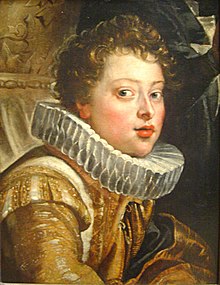 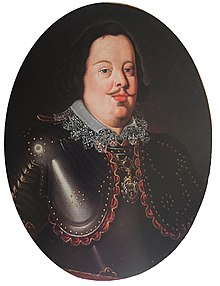 Vincenzo II Gonzaga (born February 8, 1594 in Mantua , † December 25, 1627 ibid) was the third son of Duke Vincenzo I Gonzaga of Mantua and Montferrat and - like his older brother Ferdinando Gonzaga - for service in the Catholic Church intended.

He was appointed cardinal in 1615 , but a short time later he was faced with the need to quit the service in order to ensure the continued existence of the family as the last male member of the older Gonzaga line alongside his brother Ferdinando. He married Isabella Gonzaga (1576–1627), daughter of Margrave Alfonso Gonzaga of Novellara (1529–1589) from a younger line of the family, in 1616 (the year in which his brother's first marriage failed) , but he too stayed exactly like Ferdinando, childless.

While still on his deathbed, he tried to arrange the succession. On the day of his death, he married his niece Maria Gonzaga (1609–1660), the only daughter of his eldest brother, who died in 1612, to the member of the family who, in his opinion, was next in line to the throne: Carlo I. Gonzaga (1580– 1637), Duke of Nevers and Rethel , grandson of Duke Federico II Gonzaga .

Due to the power constellation in Europe, Vincenzo's plan led directly to the War of the Mantuan Succession , in which the city of Mantua was occupied and sacked by imperial troops in 1630: Carlo Gonzaga was in fact French, and France supported his claims simply because it hoped that the to be able to loosen the Habsburg embrace. The Emperor Ferdinand II, on the other hand - for five years the brother-in-law of the late Duke - tried to withdraw Mantua as a settled imperial fief (the Gonzaga had assumed their rule in Mantua as imperial vicars ), in order to then transfer it to his preferred Spanish-friendly line Gonzaga- Guastalla to pass on, which however had the less well-founded claims towards Carlo. He had Savoy on his side, which Montferrat claimed for itself, since the emperor's pretenders were not descendants of the Montferrat marriage and inheritance.

The Thirty Years' War and, above all, Sweden's entry into the war , which required the emperor to work in the north, decided the War of the Mantuan Succession for France and Carlo Gonzaga. In the Peace Treaty of Cherasco of April 6, 1631 Carlo Gonzaga was enfeoffed with Mantua and half of Montferrat, the other half received Savoy as requested.