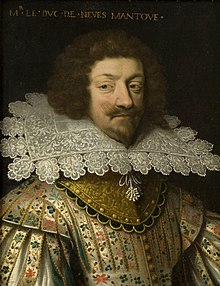 His father, Luigi Gonzaga (also called Ludovico ), was the later son of Duke Federico II of Mantua († 1540). Luigi came to France as a child (1549) and founded the Gonzaga-Nevers line (French: Gonzague-Nevers ) there in the 1560s . Carlo grew up there as well. As heir to his mother, Henriette de Cleves, he also became Duke of Nevers and Rethel.

As long as the main line of the House of Gonzaga ( Gonzaga di Mantova ) existed and ruled in Northern Italy (Duchies of Mantua and Montferrat), Carlo stayed on the Meuse and in the north-east of the Kingdom of France: As Prince of Arches on the Meuse, he was considered more independent Ruler ( prince sovereign ); there he founded the city of Charleville (1606). He was also in the service of the French crown for several years, for which he (officially until 1631) administered the powerful office of governor of Champagne and Brie. In the summer of 1622 he succeeded in averting the incursion of an abandoned mercenary army under Ernst von Mansfeld into France.

After the extinction of the main line of Gonzaga in 1627 and the Mantuan War of Succession Carlo Gonzaga was in connection with the Peace of Cherasco in 1631 by Emperor Ferdinand II. Of Mantua and Montferrat invested , after his predecessor, Duke Vincenzo II. Gonzaga on his deathbed about this regulation had documented by marrying his niece, Maria Gonzaga, on December 25, 1627, to Carlo's son Carlo II Gonzaga .