Francesco III. came from the Gonzaga house and from the main line that had ruled the city of Mantua and its lands since 1328. He was the eldest son of Federico II Gonzaga Duke of Mantua and Margrave of Montferrat and his wife Margareta Palaiologina, heiress of the Margraviate of Montferrat.

After the death of his father on July 5, 1540, Francesco followed as Duke of Mantua and Margrave of Montferrat. Since he was only seven years old when his father died, the effective government lay with the regents appointed by his father: his widow Margareta and the uncles of Francesco, Ferrante I. Gonzaga (* 1507, † 1557) and Cardinal Ercole Gonzaga ( * 1505; † 1563). Giovanni Agnelli, who had previously been the Duchy's ambassador to Emperor Charles V, was appointed his tutor.

Since both countries were fiefdoms of the Holy Roman Empire , he required an imperial investiture. This took place on June 28, 1543 by Emperor Charles V , who was then the guest of Margrave Aloisio Gonzaga in Castel Goffredo . The emperor went to the Castello di Medole and there he gave the investiture to ten year old Francesco Gonzaga in the presence of his guardians: his mother and uncles, Ferrante Gonzaga, who was then governor of Milan, and Cardinal Ercole Gonzaga.

At the same time it was agreed that the little duke should marry a niece of the emperor, Catherine Archduchess of Austria, a daughter of Ferdinand I.

The reign caused by the duke's youth extended not only over the entire life of Francesco Gonzaga, but also over the period when his younger brother Guglielmo Gonzaga was a minor . With it began a period of stagnation and later of the decline in the political and military importance of the rule of the main line of the Gonzaga family, since they could not pursue an independent policy, since the rulers were among the emperor's closest collaborators and therefore closely conformed to the imperial policy .

The political environment was complex, as it was shaped by the contrast between the conservative politics of the House of Austria , which represented traditional political, religious and social ideals, and the dynamic world of Protestantism, which for tactical reasons was dominated by its Catholic ruler Franz I. was supported, who even allied with the Ottoman Empire against Austria. Then there was the rising bourgeoisie, which questioned the feudal structures due to their economic power.

The main burden of the reign lay with Cardinal Ercole Gonzaga, who shaped the external relations closely following the imperial policy and relied militarily on mercenary troops of the Duchy of Milan, therefore could save his own troops. Ferrante Gonzaga was constantly absent on campaigns or as governor in the service of the emperor, therefore seldom in Mantua, while the duchess-widow led a secluded life and achieved little more than to leave her name to the rooms she inhabited as "Palazzina della Paleologa" .

Francesco III. died on February 21, 1550, not yet 17 years old, when he fell while hunting in the icy lake, was rescued, but fell ill with pneumonia and died after a brief recovery. He was buried in the Basilica di Santa Barbara in Mantua. 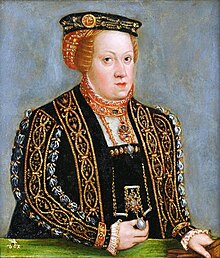 Cranach the Younger, Catherine of Austria, wife of Duke Francesco III. from Mantua

Francesco III. had meanwhile become 16 years old and the reasons of state required that the long-planned marriage with the Imperial Princess Catherine Archduchess of Austria (born September 15, 1533, † February 28, 1572), a daughter of Emperor Ferdinand I and his wife Anna von Bohemia and Hungary (* 1503, † 1547) should be closed from the House of Austria. Katharina therefore set out on her way south, with Francesco traveling to meet her as far as Trento. Francesco's two uncles, Ferrante and Ercole Gonzaga, accompanied a large retinue of knights from Mantua, Milan and Spain to Verona to receive the bride. The wedding finally took place in Mantua on October 22, 1549, accompanied by great festivities. The great happiness was short-lived, however, because Francesco died just four months after the marriage, which left the marriage childless. The rule over Mantua and Montferrat therefore passed to his younger brother Guglielmo Gonzaga .

For Katharina, however, a new life began as Queen of Poland, as she married the Polish King Sigismund II August on July 31, 1553 in Krakow . However, when it became known in 1558 that she suffered from epilepsy and could not have children, the childless king separated from her in 1562/1563 and sought a divorce in vain for years. Her death did not bring a solution either, as he only survived Katharina by a few months.